Why Imelda Staunton Likes Being Labeled a Character Actor 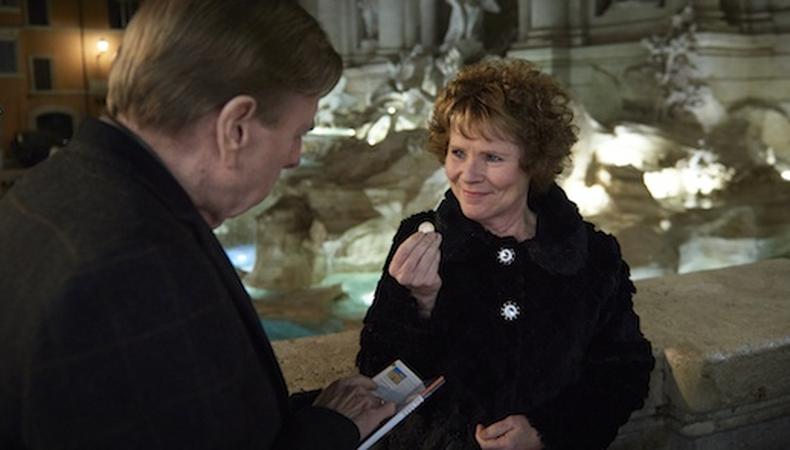 Imelda Staunton has long been a household name in her native England, but it wasn’t until her best actress Oscar nomination in 2004 for “Vera Drake”—followed by her cheerfully fearsome turn as Dolores Umbridge in the latter half of the “Harry Potter” series—that she garnered similar recognition across the pond. As a veteran actor’s actor who cut her teeth on the West End, she’s just the sort of actor Backstage readers can learn a thing or two from, which is why it was such a treat to speak with her about her latest feature film, “Finding Your Feet." Employing her trademark smarm, Staunton stars as Sandra, an uptight snob who, after learning of her husband’s affair, is forced to move in and reconnect with her bohemian sister. Below, she unpacks the film’s many surprises, offers advice to those getting their start, and explains why she embraces the “character actor” label.

What about playing Sandra in “Finding Your Feet” really interested you and inspired you to become involved?
I think I found it quite unpredictable, the script, which I quite liked. I thought, “Oh, this is just a very easygoing—oh! Christ. Right. That’s happened.” It takes unexpected turns, which I think makes the story a little meatier than you think it’s going to be. It’s always nice to play a part, play someone who has to change and make a journey, if you like. And it was really nice to be able to do that in a film which is hopefully a bit of a crowd-pleaser—you know, it’s a light weight, nice afternoon film or feel-good film. But I think it’s got a little bit more weight than a lot of films like this.

And you’re sharing the screen with a roster of such talented actors.
Well, [Timothy Spall] and I were at drama school at the same time, back in the early 16th Century. So we’ve known each other all that time. And Celia [Imrie] and I worked together first in 1978, so we’ve known each other since. So that was easy peasy. And then [Joanna Lumley], I hand’t worked with, but I’d met, obviously. And David [Hayman] I’ve admired from afar for many years. So it was a real treat. These are all actors who I respect, and you can be so relaxed and easy because they’re half friends and have the people you think, “Well you’re marvelous,” and so that makes for a very good atmosphere on set.

What advice would you give your younger self when you first began acting in the U.K.? What’s one thing that you’ve hung onto all these years?
Resilience. You have to be resilient because you spend most of your life being rejected. I’d like to paint a pretty picture—because that’s the truth about the business. And that’s fine if you can deal with it, and that’s why when I go and talk to drama students I just say, “Listen guys, go out there and do your best and you’ll be rejected like I have been.” And you still are. Wherever you are on the ladder, someone’s going to be above you or below you. Don’t worry about it. But also, I would say to people don’t waste your life not being an actor. If you turn around after 10 years, 12 years, and say, “You know what? I’ve gotta get a life,” get a life. You don’t want to turn around in 25 years and [feel that way] because it’s soul-destroying. And if you keep working doing little jobs, I mean, I never dreamt—I did regional theater for six years when I left drama school, and I was perfectly happy doing that. I didn’t have much ambition, you see, so that helped. Ha! So I just thought I’m happy doing what I’m doing, just happy doing it. And then you get an audition—I had an audition for the National Theatre. “Oh, right! OK!” And then I came into London. I never disappointed myself because I was never really thinking, “Oh, I could be doing this. I should be playing that part. I should be playing this part.” No. I was quite happy with where I was at the time. I was never [feeling like] I gotta do the next thing. A good thing to say to [actors] is just be happy with what you’re doing on that day.

In those early days of your career, were you making money acting all the time, or did you ever have a survival job?
Nope—I made money acting. It’s so different. This is the mid-’70s. I worked for three years with no agent, I just went from job to job to job. I know, I know. You know, some things are better today about the industry and some things are worse. I’m not one of those actors who says, “Oh well, in my day, it was this that and the other.” It was just different. But that said, you know, I had very cheap rent in London, very cheap rent in the regional theater, and I could save money. I mean, it’s unthinkable now that you can pay two rents and have a little bit of savings—but I did. There was one [job] about six months before I knew I was going to do another job, and I worked in the kitchen of a Greek restaurant, and they said I was the best worker in the kitchen. I worked so hard. I really like to work hard when I’m doing something. Whatever it is, I’ll do it really, really well.

I’m sure you don’t find yourself in the audition room very often these days, but how is it that you prepared for auditions and found success in the room?
Well, that was what you did, you know? I didn’t question it. I would just go in and give it my best shot and come out. And of course there were disappointments all the way along the way, and then you just have to get up and go, “All right, well it’s someone else’s turn today. It’s not my turn today.”

Do you have an audition horror story you could share with us?
[This] was embarrassing for me, but I auditioned originally to take over for Elaine Page in “Cats” in 1981. And I sang for Trevor Nunn, and he took me and said, “I want you to sing for Andrew Lloyd Webber.” So I went to Andrew Lloyd Webber’s house, and I sang the song—not very well. But I sang it. And he said, “I’m going to play you the best version of this song, ever.” Oh, oh god, OK. He then put on this amazing sound system that then played with a 60-piece orchestra Barbra Streisand singing “Memory.” And then he said, “Now sing it again!” I said, “Oh, you’re out of your bloody mind. Thanks a lot for that.” Of course I didn’t get the job. How could I? I mean, I couldn’t sing it at all after I listened to her sing it. So that was a bit difficult for me, that one. What a terrible thing to do to anyone!

You of course have your roots in the theater. Was there much of a transition for you between your theater work and then going into film?
I don’t think I was really comfortable on television or film for quite some time, really. And it was actually only after doing Mike Leigh’s “Vera Drake” that I really learned how to rein it in, for want of a better phrase, and to do the focus when you’re on film. It had to be different for me. So it took me a long time, I think, to adapt to film. It’s interesting because our history in England is theater, and American history is film. I think we make great sort of character actors. I mean, of course with the exception of Daniel Day-Lewis and Helen Mirren and Judi Dench—they’re character, but they’re wonderful leading actors, too. But it’s no accident that a lot of baddies in films are played by the Brits because we do these mad characters, I suppose. And I think we don’t mind being not liked.

What do you think about that label, “character actor”? It sounds like you wear it comfortably.
Yeah, because every part you play is a character! Every part you play. I think the character actor, that phrase is going to die out, really, because there’s so many amazing parts in films now. But no, it doesn’t bother me at all. And as I said, they’re all characters. Big, small, round, tall, long—whatever. It’s all to do with the writing, not to do with your ego.

And finally, what makes you say yes to that next project? What excites you at this point in your career?
Originality. And truth. And heartbreak.

Benjamin Lindsay
Benjamin Lindsay is managing editor at Backstage, where if you’re reading it in our magazine, he’s written or edited it first. He’s also producer and host of a number of our digital interview series, including our inaugural on-camera segment, Backstage Live.
END_OF_DOCUMENT_TOKEN_TO_BE_REPLACED