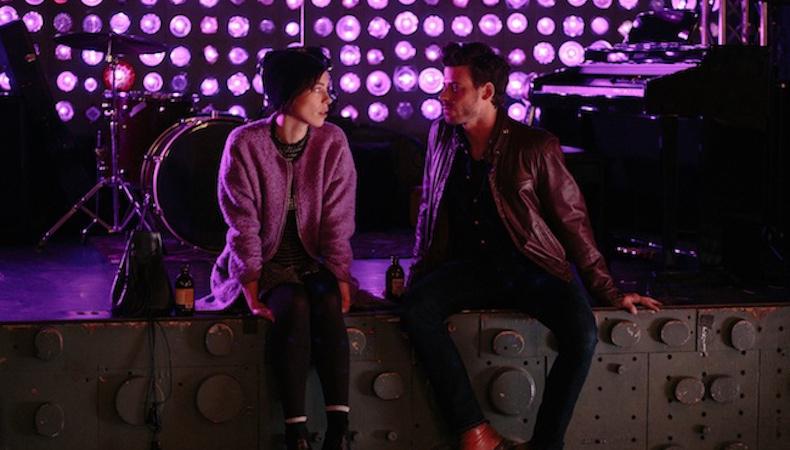 BAFTA-winning and Golden Globe–nominated actor Rebecca Hall (“Christine,” “The BFG”) makes her actor-producer debut with writer-director Brian Crano’s decidedly adult romantic comedy, “Permission.” She stars as Anna, a woman who, before committing to marriage, opens her relationship with longtime boyfriend, Will (Dan Stevens)—for better or worse. Hall stopped by Backstage HQ to chat about how she prepares for a new role, what it was like to produce her first film, and what advice she has for early-career U.K. talent.

This was Hall’s first time producing, but it won’t be her last.
“I learned so much. I suppose there was a difficult thing of having to be bad cop occasionally, especially when everyone working on it happened to be your friend! That was tough. But you’re prepared for that stuff. The best producers understand what the director wants creatively and facilitates it. You have to distinguish between what your tastes are and what’s facilitating their tastes, because, ultimately, it’s their film.”

Visually charting her character’s growth helps her acting.
“I believe in knowing exactly who a character is, through and through. I tend to do a very large chart, which is actually the best part. I’ll get a large piece of cardboard, and I’ll do a bubble for every scene that they’re in, and an arrow that goes to the next scene, so you have a kind of throughline. And in the bubble, I’ll write whatever I’m feeling. I’ll pin it up in the trailer so when the scene comes, I can know exactly what’s preceded it, and where I’m having to get to.”

When choosing her next role, empathy is key.
“I think it’s a really basic gut thing. I can’t really say more than that. I do tend to look for something I haven’t really done before. I’m not one to be pigeonholed. I tend to gravitate toward roles that are difficult. The center of what actors do is empathy. If you can [humanize] a character who otherwise we’d all write off as being difficult, then I think you’re doing something quite useful for the world.”

Auditioning—and rejection—is never easy.
“At the beginning, [rejection is] much harder. I think the only wisdom I have on it is that there really isn’t any wisdom. You just have to accept it. Find a way to not take it personally. Think of it as if you were directing the piece, and you just happened to want someone who looked a little differently. There is nothing you can do about it on the whole. That, and just sort of go and scream into a pillow, get a drink…. There’s always another [audition].”

Being an actor in multiple geographies all depends on what you want.
“When I started out, the industry wasn’t as global as it is now. I was in England; therefore, the industry I was going to be working in was the British industry. I definitely witnessed that change, and that was interesting. It’s a massively competitive world. I think one of the things to ask yourself is, ‘What kind of actor do I want to be?’ And then you follow that. Because if you want to be a massive film star, then you need to be honest with yourself. If you want to be a stage actor that wants to do new plays, stay in London. I think that’s easier said than done.”

New York City is as intimidating as it is inspiring.
“[NYC] has a lot of life. When I first started coming, it was a place of action. You’d go out and you’d meet people and you’d witness life in a very nonpassive way. Not many cities are like that. I think a lot of being an actor is living. The more you live, the more informed your acting is.”

Want to work in the U.K.? Check out Backstage’s London audition listings!