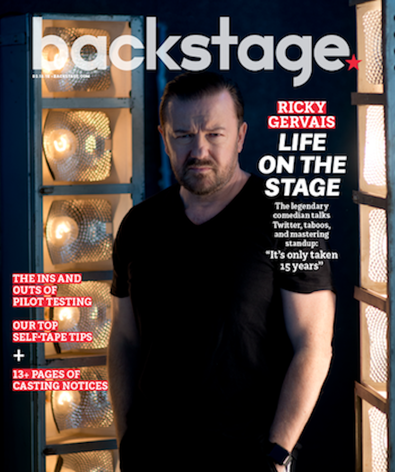 Nothing can top the year Ricky Gervais has just had. It’s early February 2018, and Gervais is fresh from dousing the floor with Champagne, smoking a cigar, and completing a world tour. Traveling for his forthcoming Netflix special “Humanity” was, as he describes it, “luxurious,” but that’s not what’s got him so elated: After hitting nearly 30 cities in 10 countries over seven months, Gervais is finally able to say he’s mastered standup comedy. “It’s only taken 15 years. That shouldn’t be a revelation,” he says with a straight face. “Of course it takes a long time to be good.” After four U.K. tours, “Humanity,” his fifth, is his standup magnum opus. “I don’t look back and think, Oh, my God, what I was I doing? It’s fine,” he says of his previous work. “But I can tell the difference.”

It’s almost jarring to hear earnest self-criticism from Gervais. He is a performer, writer, and director who almost single-handedly wrestled the sitcom into the 21st century. When he starred in his best-known property, “The Office,” in 2001, about the employees of a paper company in Slough, England, he accomplished in two seasons what it takes others much longer to do: foster a rabid following. He replicated the series’ same mockumentary style for “Extras,” the 2005 comedy series about background talent, and launched “The Office” in the U.S. the same year.

When the series began streaming in its entirety on Netflix in 2013, it proved the beginning of a fruitful partnership with the entertainment company, which led to his series “Derek” and spin-off film “David Brent: Life on the Road”—not to mention distribution for “Humanity” and his next, as-yet-unwritten comedy special. (The streamer bought the rights in January.)

Gervais’ latest show, his first in seven years, is pure, razor-sharp observational comedy. Like his cut-to-the-core Golden Globes sets, it pokes fun at celebrity culture, aging, and social media, and, while celebrating free speech, it steers clear of politics. “There’s one reference to Brexit, but I don’t talk about politics. If you get a round of applause because they agree with you, I don’t like that,” he admits. “Comedy is an intellectual pursuit, not an emotional one. As soon as you deal with emotional subjects, you’re rallying.” Every other subject, however, is up for grabs. 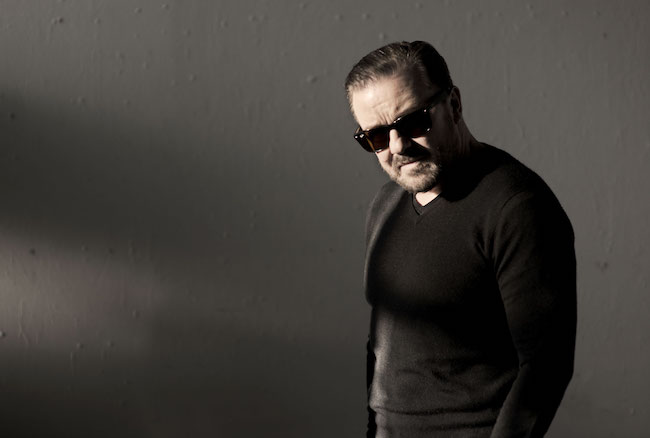 Humanity” lives up to Gervais’ reputation for diving headfirst into taboo subjects. “I’ve lived through political correctness destroying the terrible old racist and sexist jokes, then the backlash against that, then people objecting because they can’t be their old racist selves.” And where are we now? “It’s subjective,” he reflects. “Some people think it’s more offensive for me to be blasphemous than for them to be racist. I disagree. And I think I’m right. I do have my own set of moral codes, I do delineate.” Gervais is surprised that he’s sometimes labeled as a shock comedian: “Nothing could be more boring,” he says. “I’m not one of these comedians who thinks that comedy is my conscience taking a day off.”

It’s all a matter of being rigorous about the vetting. “Some subjects are more frightening, taboo, and dangerous. But only because they’re in the taboo stage of their existence. Journalists ask, ‘Is there anything you wouldn’t joke about?’ But they don’t get asked if there’s anything they wouldn’t write about! They say they would do a fair analysis, but I’ve probably worked harder on jokes that look throwaway and ad lib than journalists have on a column. I’ve worked on it for days, sometimes weeks, and tried it in front of 100,000 people, all to get it just right. It looks like I’m walking a tightrope but I’m not.”

Gervais sees standup as evolution by natural selection, whereas the screen only allows you to “do your best guess.” “You do it every night and the audience is choosing the best bits. It’s less of an art and more of a science. Now I’ve done this show to 500,000 people, there’s not an audience who understands English that won’t laugh in the same place. I could give you the readout on a graph and it would be exactly the same.”

The success of this methodical, present-day Gervais came from the “miserable failure” of another, earlier one who had his priorities the wrong way around. “I didn’t want to be a comedian, I wanted to be a pop star.” It was his first great life lesson. “I realized that I shouldn’t have wanted to be a pop star, I should have wanted to be a musician. So when I got a second bite of the cherry, I didn’t want to be a celebrity, I wanted to be a writer and director. And then you realize that’s all there is.” He’s unashamed to admit there was another lesson learned with “The Office.” “The biggest turning point about it was not just finding something I was good at and that I loved, but much bigger than that; it was the first thing I’d ever tried my hardest at. And that shouldn’t be a revelation at age 40, but there you go.”

It’s no surprise that Gervais’ favorite comedy film is “This Is Spinal Tap,” but there’s another, deeper influence to his work: the legendary comedy duo Laurel and Hardy. For the comedian, they not only “nailed comedy 100 years ago” but created the perfect recipe for him to adapt. “If you think of Laurel and Hardy, they are a dissatisfied Socrates and satisfied Fool. Brent was a dissatisfied Fool. I made Andy in ‘Extras’ a dissatisfied Socrates. He was bottom of the pile and hating it, surrounded by other Stans. I wanted to do a platonic Laurel and Hardy with a man and woman. Luckily, I was a fat person who could play annoyed, and I remember my only direction to Ashley [Jensen] was ‘more Stan’—that’s why she looked dim all the time, it was Stan Laurel.” 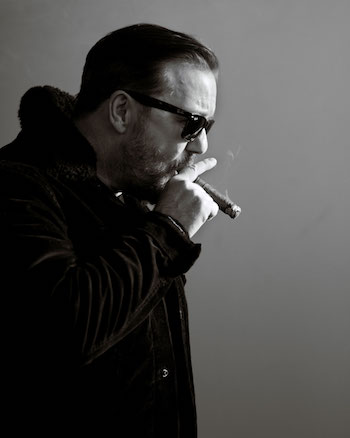 Gervais’ talent not only for character creation but for casting actors in now career-defining performances can be measured by how his projects have launched stars like Martin Freeman (“The Hobbit”) and Mackenzie Crook (“Pirates of the Caribbean”) into global success. Both were surprises. Freeman originally auditioned for Gareth on “The Office” and was “practically walking out the door” before Gervais got him to read for Tim and “he made it his own.” Crook’s character was meant to be stocky, “but Mackenzie came in looking like a baby bird who’s ill and said the lines ‘I could kill a man,’ ” and the creator knew he’d found his Gareth. His approach was simple: “You either get what you want in your head or someone better walks through the door.”

Now the actors he dreams of working with are usually those he’s worked with before. He hints that his next sitcom will feature cast members from every previous show. “I know they’re not maniacs. And that’s important,” he says. “It’s not all about the finished product for me. I don’t want to have the worst year of my life to win an award. I’d rather have the year back. It’s got to be fun. A fun set goes on camera.” It also allows him to play to their strengths. “That’s why the second [season] of something is usually better. The first, you write and cast it and then something changes. The second, you know you’re writing for Martin Freeman. You’re writing to Ashley Jensen. You know what they do.”

Although Gervais describes himself as lazy—“I was lazy when I was piss poor, so imagine how much it takes to get me out of bed now”—he’s worked hard to ensure he always has one thing: total artistic control. For him, that’s part of the rock star nature of standup. “I don’t mean the glamour. I mean when you’re an actor and you get a great role in a rubber suit and a mask, people are clapping for the rubber suit and the mask. But when you’re a comedian or a rock star, you’re a rock star offstage as well. This is me; it’s a slight persona, but I still say the things I want to say. No one else wrote it or told me to say it.”

Is there such a thing as “offstage” in the age of social media? “Twitter is great for me. All the terrible things in the world are great for me: ego, jealousy—they’re great for character. As an observational comic it’s amazing, because 10 years ago, I’d actually have to meet morons. But now I just read my tweets from the safety of my Hampstead mansion.” Gervais reveals that he uses Twitter as a tool, a sample of 13 million people from across the world. “It’s an amazing catalyst for writing. It taught me to write concisely and learn about the ambiguity of a joke. I’ll put something out there and there’ll be someone who asks, ‘Did you mean so-and-so?’ And you think, I didn’t even see that ambiguity. It allows you to change or adapt it. It’s everyone in the world giving me their opinion without knowing if I’ve seen it or not. It’s like being a ghost.”

From a wannabe pop star to trying out jokes on social media, the actor-comedian’s career hinges on the fact that he’s unafraid to show people what he can do. “The Office” was picked up because he and co-creator Stephen Merchant filmed the pilot themselves. “If I’d have sent the script off, it would have stayed in someone’s drawer. It had to be seen. Otherwise, someone would have read: ‘Middle-aged man says something that’s not funny, no one laughs, he touches his tie and looks at the camera.’ It’s all about performance. You read Shakespeare and think, What’s the point of this? You see it and immediately you go, Ah, that’s the point.” Gervais pauses, forming a serious expression. “I just compared myself to Shakespeare—but I didn’t.” He laughs uproariously. “I didn’t, really! Oh, that’s the headline isn’t it!”

Photographed on February 7 in London by Rich Hardcastle