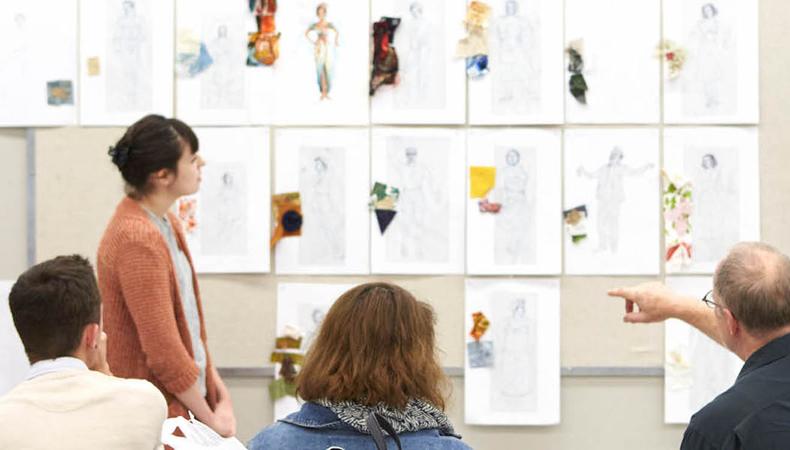 The costume makes the character but does the training make the designer? A degree or certificate in costume design or production can be a pivotal decision, one that’s more than just matching colors together. Programs across the country are emphasizing that designing costumes is more than being an artist—it’s about being an academic too.

While many working designers don’t have a formal degree, entering a training program can provide close mentorship and cultivate connections in a network-based industry. It can also enhance an artist’s skill and portfolio, though it’s still not a guarantee of success in the industry. If you decide a formal program is the route for you, Backstage has put a list of training programs that are designing the costume industry in film, television, and theater.

California Institute of the Arts

With a focus on contemporary aesthetics, the CalArts Costume Design graduate program teaches costuming in relation to other forms of design like architecture, art, and science. This modern approach makes the program distinctly innovative in its style of teaching, and clear in its aim to cultivate artists with a distinct—and multidisciplinary—voice. A class on costume design and animation, for example, “mixes costume designers and animators together in one room, working on practical projects in terms of world-building and creating characters,” says instructor Camille Benda.

If you’re looking for a modern approach with interdisciplinary classmates, this might be the west coast school for you. According to Ariel Boroff (2010), working closely with fellow MFA classmates allowed her “to figure out who these characters were and who they were as people beyond the facade of a character.”

Considered one of the most rigorous theater training schools in the country, Carnegie Mellon offers a costume design program that emphasizes practice and application. Both the undergraduate and graduate programs at CMU emphasize the development of conceptual design techniques along with practical construction skills—tailoring, draping, dyeing, and millinery—and with a robust on-campus performance calendar, students have ample opportunity to apply their approaches to theater, dance, and film projects under the watchful eye of mentors and staff tradespeople. With a roster of guest artists and an emphasis on analytical approaches, CMU’s programs aim to create holistic (and well-connected) artists in the field.

“Working on [school] productions in different jobs helped me to learn to respect the actors and made me interested in what makes them feel comfortable in the part. What we do is not fashion and while sometimes it overlaps, it’s all about the character,” said alum Daniel Orlandi. “Now that I am well into my career, I will hire someone who went to Carnegie as we have a shorthand already.”

With certificate programs and individual courses, New York City’s FIT offers costume design and wardrobe maintenance training through the State University of New York with an emphasis on practical training for designers who want to enhance their technical skills. If you’re interested in a degree from FIT, their fashion design MFA offers prestige and access to the FIT Museum, home to a world-renowned collection of fashion history—an integral part of any costume designer’s process.

University of North Carolina School of the Arts

UNCSA’s undergraduate costume design and technology, and graduate costume design programs prepare students to design for a variety of different mediums and genres, from film to opera, Shakespeare to contemporary. With a strong alumni network working as designers, drapers, managers, and supervisors across the industry, it’s easy to see why graduates are a force in the costume industry—and entertainment at-large. Because it’s a state-funded institution in a small city, UNCSA has some of the most reasonable tuition costs.

“UNCSA became a haven of very talented artists. When you think about the vast array of talent you were surrounded by and what everybody brought with their experience, it created an electric energy,” says alumnus Paul Tazewell. “The exposure to building and designing costumes and really understanding what it took, it gave me the base to then be able to mature as a designer.”.

NYU Tisch School of the Arts

The costume design program at NYU not only emphasizes the cultivation of practical skills but also the historical and theoretical approach, too. Students are taught to develop costumes right alongside characters and text thanks to classes that teach cultural contexts, analysis, and collaboration, along with studio and design work. Located in New York City and with a long-list of Tony and Oscar nominees alumni, graduates enter the industry with a rock-solid network in place.

With Oscar-nominated designer and author Deborah Nadoolman at the helm, UCLA’s David C. Copley Center for the Study of Costume Design is not only about design but also scholarly studies, research, and analysis, making it a think tank in the field. Under the umbrella of the School of Theater, Film, and Television’s Design for Theater and Entertainment program, the undergraduate and graduate design training at UCLA emphasizes critical thinking skills: artists are taught to approach costume design from a strategic, informed approach. The school’s proximity to Hollywood’s production facilities and costume houses also offers a pipeline to internships, apprenticeships, and, eventually, jobs.

“When I’m costume designing, I am not an individual part; I’m part of a team that works together throughout the whole process,” says MFA alum Alexa Weinzierl of the collaborative nature of the program. “I’m constantly talking to the scenic designer, the lighting designer—none of our designs would work without the other.”

“UCLA is a rigorous program that prepares students for a career in the entertainment industry. We place 100% of our students in theater, film, and television productions.”

At UC Irvine’s Claire Trevor School of the Arts, graduate students not only dip into contemporary and period aesthetics, but the curriculum offers courses in budgeting, project management, and leadership and negotiation—making it a distinctly industry-focused approach. Graduates of the program have landed in a variety of settings, from film and television to theater, to teaching at the university levels. The Bridge Project at UCI brings in a guest artist, allowing students to cultivate an intimate industry relationship in the field before they walk across the stage with their diploma.

Considered one of the most elite programs in the country, a degree from the Yale School of Drama a cultural weight all its own, and an MFA in design is no exception. Students get an integrated approach that emphasizes all elements of theatrical design: scenery, costume, lighting, projection, and sound. This course of study ensures that graduates are capable of conceiving costumes (and other design elements) holistically. With 25 annual productions, design students have ample opportunity to practice their craft with like-minded pre-professionals.

And while the Ivy League classification may seem like a barrier, the school has been intentional with diversifying its student base by offering 85 percent of graduate students financial aid. “The atmosphere was very intense, but forced great productivity—which you later learn is a very important part of succeeding in the industry,” said Donna Zakowska, the Emmy-winning costume designer behind “The Marvelous Mrs. Maisel.”