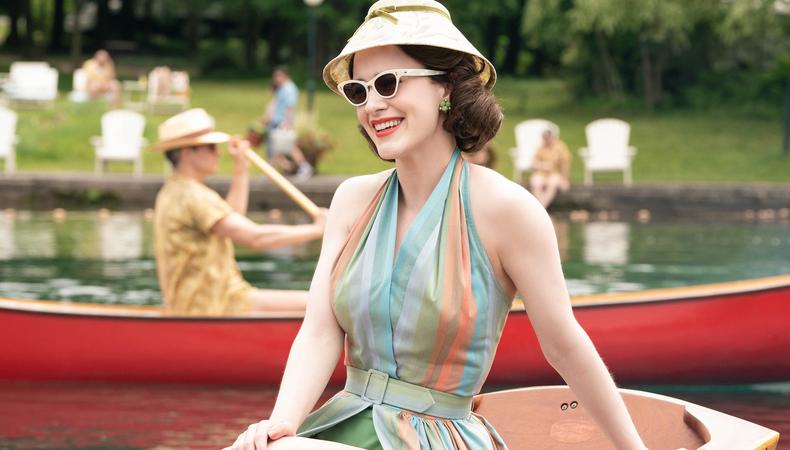 Following its second sartorially delectable season, Amazon Prime’s “The Marvelous Mrs. Maisel” has become synonymous with drop-dead gorgeous period looks. That’s thanks to costume designer Donna Zakowska, who has endowed the Emmy-winning hit with enough colorful frocks and pillbox hats to make even Jackie O. green with envy. Zakowska, an Emmy winner herself, speaks with Backstage about the “instant chemistry” she felt with series creator Amy Sherman-Palladino, how actors should collaborate with their costumers, and the clothing item that helps star Rachel Brosnahan feel more like that marvelous Mrs. Maisel herself.

How would you describe what a costume designer for television does?
Although this is now shifting, the difference between doing movies and television is being strong enough to know what would read on a smaller screen. Also, it’s about having immediate responses. Unlike in film, where you have the script from Day 1 and you know where you’re going and then you start planning, for TV, you have to be very spontaneous. You have to have a strong sense of who your characters are from the very beginning, so that in a very short amount of time, you’re able to create these characters and the clothes. The speed and the spontaneousness, I’d say, are the strongest traits [necessary] when you’re designing for television.

What are your costume design origins?
I went to art school and then to the Yale School of Drama. That’s how it all began. I really enjoyed it, and having had a singing and dance background—I always say those two things are combined in my work. It’s very much about color and the movement of color. That’s the way I sometimes think about the clothing: like moving sculptures.

“Maisel” is known for its drop-dead gorgeous costumes. How’d you land the gig?
I really didn’t know anyone. I simply had an interview with Amy and [her husband, series co-creator] Dan Palladino. I felt an instant chemistry. We all love to talk, back and forth, about history and iconic images. I’ve always had a love of characters and creating characters. In that meeting, it just all came together, and before I’d even left the building, my agent called me and said, “They want you to do this.” We just knew that our dialogue was going to be successful, which isn’t always a given. Sometimes it just doesn’t happen and it’s not going to be a joyous experience to be on the job.

“Speaking the same language” is incredibly important to the Sherman-Palladinos, I imagine.
Absolutely. Amy and Dan direct as well, but they are truly writers. The dialogue of the characters and the scenes, you have to be into it, and working in conjunction with their ideas about the characters is very important because they have very strong feelings about it. You have to know the [narrative] arc. I’m probably not even aware of what the whole arc is, but they know in advance where they’re going with these characters, what they’re trying to do.

What about “Maisel” is unlike any job you’ve previously done?
I’ve really been able to explore color in a way I haven’t before that is really close to my sensibility and my love of color as an expressive means in costuming. It’s thrilling to be able to do that, to have the opportunity to really design and build so much clothing. That again is what’s difficult about episodic television, to actually build and design clothes in this timeframe. The amount we’re doing and trying to keep the standard up is a little bit stressful. I’ve done a lot of 18th century [costuming] before, and I’ve always done that in a much more subdued way. We wanted to make that clothing look real, so this is a very different journey.

Is there a negotiation on “Maisel” between period accuracy and taking some liberties for exorbitant fun that pops on-camera?
Everything begins with research: endless amounts of looking at Vogue and magazines of the period, books and photographers of the period. And then, in the experience I’ve had, it’s knowing how to translate that to the camera. I began as an assistant on Woody Allen films and was really allowed into the process, to sit in that editing room every day. I really learned, “Oh, this is how the camera sees.” Something may look one way, but that’s not what the camera is going to see, and you have to see the way the camera sees.

As a costume designer, are you working closely with the actors?
Oh, absolutely. I go to every fitting. John Turturro was my roommate at the Yale School of Drama. Having breakfast and lunch with a roommate like that was the beginning of being very exposed to the heavy-duty actor process. I really respect the performer. We do what we do and then they have to pull it through, and I feel you have to set up, as much as you can, a safety net. They are in a very vulnerable position, so I feel we have to protect them a bit as a costume designer. I have a great deal of respect for actors, because it’s so hard, what they do. I like actors and I’m always amused by the path they take in a role.

How do you think costumes can enhance or deepen an actor’s performance?
For many actors, the first costume fitting is when they begin to see who the character is. Rachel and I had talked about the fact that sometimes, when she puts those hats on, she feels more like Midge. The hat goes on and she’s like, “I’m Midge now.” When actors have their first fitting, sometimes it’s the first time they’ve actually thought about the character and about the person in terms of physicality. The best thing is the fittings where the actors participate and collaborate with you. The best costumes I’ve done are the ones in which the actor had something to contribute to the process. I think it’s fuller, and it’s always a better costume when they are a part of it and absolutely buy into the image you’re trying to create.

So you appreciate actor input?
In the best circumstances, you have really good dialogue with an actor because they will always have something to contribute and they can bring you further into the process than you can go by yourself. Also, what you’re doing has to make sense. They have to wear it, they have to animate it, they have to be that person. I want to make them feel comfortable in their costume, so their input is very key to me and I really enjoy it.

Casey Mink
Casey Mink is the senior staff writer at Backstage. When she's not writing about television, film, or theater, she is definitely somewhere watching it.
END_OF_DOCUMENT_TOKEN_TO_BE_REPLACED