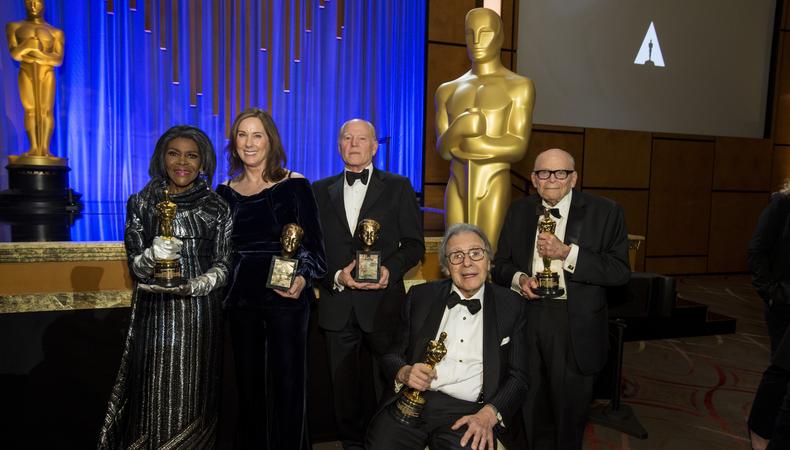 The Governor Awards celebrated its 10th anniversary Nov. 18, honoring five industry legends at the Highlands Center’s Historic Ray Dolby Ballroom in Los Angeles. The Academy of Motion Picture Arts and Sciences (AMPAS) bestows the honorary awards; the Governor Awards’ A-list black tie dinner is widely regarded as a chance for Oscar hopefuls to spend important facetime with Academy members, while honoring the best of the best.

The Academy announced the winners of the Governor Awards back in September. President John Bailey said of the ceremony, “Choosing the honorees for its awards each year is the happiest of all the Board of Governors’ work. And this year, its selection of five iconic artists was made with universal acclaim by the Academy’s 54 spirited governors.” Three of the awards this year were given for lifetime achievement in the motion picture industry, while two winners received the Irving G. Thalberg Memorial Award, which is “presented to a creative producer whose body of work reflects a consistently high quality of motion picture production.”

Bailey kicked off the 2018 celebration on Sunday with a joyful tone: “We love the movies, how they define us, how they inspire and change us, how, in an ever more divided world, our movies unite us in a greater human community by an appreciation of our art and the artists who create it.”

Legendary actors Tom Hanks and Laura Dern handed out the first award to honoree Marvin Levy; the longtime publicist was the first of his profession to receive the award. Hanks said of Levy, “The man whose first brush stroke on the blank canvas can seduce us, making us just have to see the rest of the masterpiece—and God willing, see it in a theater near you.”

The Academy tapped filmmaker-star Clint Eastwood to present music legend and film composer Lalo Schifrin with his Honorary Award. The composer is responsible for the scores of such films as “Dirty Harry,” “Enter the Dragon,” and is most recognizable for the original “Mission Impossible” theme.

Tyler Perry next lauded honoree Cicely Tyson, calling the barrier-breaking Hollywood legend “a good woman with a good heart and a good soul.” Quincy Jones and Ava DuVernay presented the award to Tyson, who celebrates her 94th birthday next month; she is the first black woman to receive an honorary Oscar statue.

The final honorees of the evening were Amblin Production co-founders Kathleen Kennedy and Frank Marshall, who took home the Irving G. Thalberg Memorial Award presented to creative producers; Kennedy became the first woman to ever receive the award. Matt Damon and Steven Spielberg took to the stage to speak on the achievements of the couple who worked on a bevy of Oscar-nominated films, including “The Sixth Sense,” “Seabiscuit,” “Munich,” and “The Curious Case of Benjamin Button.”

The 91st Academy Awards, honoring the best film work of 2018, will take place Feb. 24, 2019, in Hollywood. Nominations will be announced Jan. 22. For more on the Oscars, check out Backstage’s awards coverage!