Al Pacino Remembers Getting His Start With Backstage 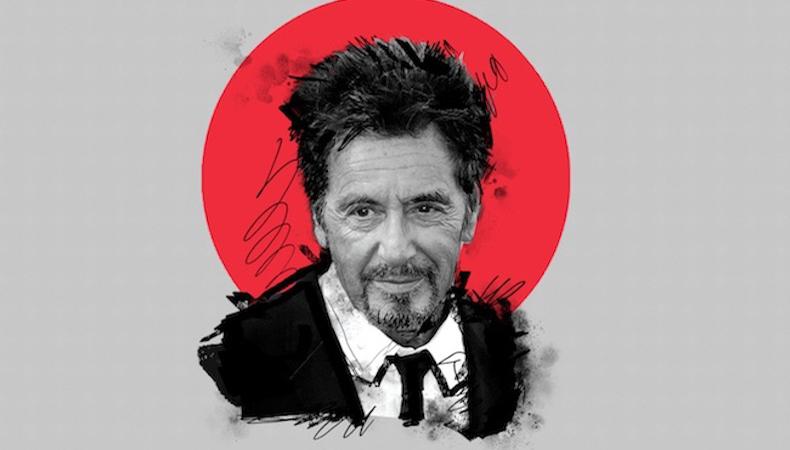 “The Godfather.” “Dog Day Afternoon.” “Scarface.” Over the last 50 years, Al Pacino has given some of American cinema’s finest and most iconic performances. With too many accolades to count (including Tonys, Golden Globes, and an Oscar), Pacino is vying for Emmy statue No. 3 with “Paterno,” his latest collaboration with HBO and director Barry Levinson. He spoke with us about tackling projects you’re passionate about, his best piece of audition advice, and his roots with Backstage.

How did you first come to play Joe Paterno?
It started a few years back. There was a script for it, and it just didn’t feel quite right for all of us involved. HBO had it, and we were just trying to find our way through. We had a few readings, but my memory of it was that it was a little off-message or off-focus. It was too many stories, I think, and it didn’t add up. It was no longer a project I was going to do, but I met with Barry because we were promoting “The Humbling,” a little movie we made based on the Philip Roth novel about an actor who’s losing it. And we were there at the 92nd Street Y having an interview, and we just got to talking about “Paterno,” and I saw Barry’s eyes light up as he was talking about it. I saw that he had a real interest. So we went on and on, and we would email each other about it, talk about it, and it grew into a text that I thought was good, and HBO said, “OK.” So we went to work on it.

I imagine at this point, you only want to be doing projects that make your eyes light up.
Either that or doing things only together. It’s that kind of thing that happens when you work with somebody a lot. There’s a familiarity that sort of serves, it really does. I go way back with Barry.

READ: What Barry Levinson Looks for in His Actors—Including Robert De Niro

What advice do you have on portraying a real-life figure like Paterno?
To me, actors have always enjoyed the idea that there’s a credibility in what they do, that there’s actually a person that exists that they’re portraying. So it gives a kind of credibility to the crazy thing of acting. It just helps you to understand something more, especially when you have a real-live figure. Because it’s not like you’re mimicking the person, but rather, you’re absorbing the idea of doing this. The background, and therefore the history and the acknowledging of certain things you relate to, certain things you don’t. The project engages you in a certain way when there’s something to go for. Having no real model is a little maddening, actually. But with a real source there, in today’s world, which has so much information about people, especially the footage that you find, you investigate that and you try to absorb it, and then if you have a good text, you try to incorporate it, try to figure it out knowing all the while that you’re sort of doing revisionist work. In a sense, you’re finding out about a character and applying it and absorbing it and learning about it, and then hopefully the script will take you there—because you really don’t know Paterno. You just don’t know what he really felt. So you have to surmise certain things and come up with stuff that you feel might have been there within the context of what you’re doing.

I feel like with a lot of your characters, there is a certain psychological grey area. There are ambiguities. Does that excite you as an actor?
Well, I’m glad to hear you say that because yeah, I do think that’s part of it. When I saw [“Paterno”], I saw it on the big screen, and it was beautifully directed by Barry. I was able to see at least some things that I don’t think I was even trying to do. That’s another thing about acting: Sometimes, if you give yourself over to [it], hopefully your unconscious comes into play. And Barry is very good with that when he works with actors to get to that. I saw somebody who seems to have felt—in the character’s portrayal, not that Paterno felt this—but I think the character I was working on or developed and portrayed had this idea right from the get-go that there was this sense of doom about him, as though this was just waiting to happen, even though he couldn’t articulate it. He didn’t even recognize in his own unconscious that it was there until it came. And so he dealt with things according to a sense of that. A sense of doom. Even his outrage or his retribution was all part of that river that he was in, and he was going upstream. It was not going to work.

What is your most memorable survival job?
I actually used to deliver the competition of Backstage, which was Leo Shull’s Show Business paper, and I would deliver it to newsstands all along Broadway from 42nd to 57th every Thursday. I dreaded it so much because it was the one job I had, and so I had to do it to eat, no matter what the weather was! So you’d put a poncho on if it was raining, and it was just cumbersome. I must’ve been about 21 when I was doing it.

Have you used Backstage in the past?
I remember Backstage as a newspaper that we used to get to look for work. Actors knew where there were actual things that they could go audition for…. The wonderful thing about Backstage—I’m gonna give you guys a real ad here, but I don’t care, it’s true!—the wonderful thing is that [you] allowed an actor to feel a part of something, because you could just really feel out of it as a young actor.

What’s your best piece of audition advice?
The secret I could tell actors is try to get that audience. Auditions are the best thing in the world to do because it’s not about getting the part; it’s about finally having an audience that will tolerate you for a while and you can get a chance to practice. Practice is everything. And, of course, Backstage really gave you the opportunity to go to some of these things—and I did! I did quite a few of them.

Right. You have to use your time in the room however it’s going to most benefit you.
I think so. That’s what I did. Of course, you go to acting school, and the best school is the school where you go and do a scene with somebody in front of people. That’s the experience. And the more you can do that, I think the more you can understand that that’s what we do. We act in front of an audience, and how do you do that? That takes a certain amount of commitment. So if you can get into an acting class or school, that’s good. [One] that isn’t too expensive. Something that allows you to participate and be a part of a community, whatever the community is. You see you’re not alone as an actor.

Several actors would likely cite your films, but what is one movie that you believe every actor should see?
That’s a very tough question. Really it is, when you think of it, because there are so many. I would be remiss if I didn’t answer you, I know, but I would say see quite a few. But there’s nothing better—if you can be inspired by something, that’s the value…. So I can’t say a film offhand except all the great performances that are out there. It’s more or less what inspires you. That’s the thing: It makes you want to, it makes you feel about yourself that you’re in a valued art form, the performing art form.

Benjamin Lindsay
Benjamin Lindsay is managing editor at Backstage, where if you’re reading it in our magazine, he’s written or edited it first. He’s also producer and host of a number of our digital interview series, including our inaugural on-camera segment, Backstage Live.
END_OF_DOCUMENT_TOKEN_TO_BE_REPLACED