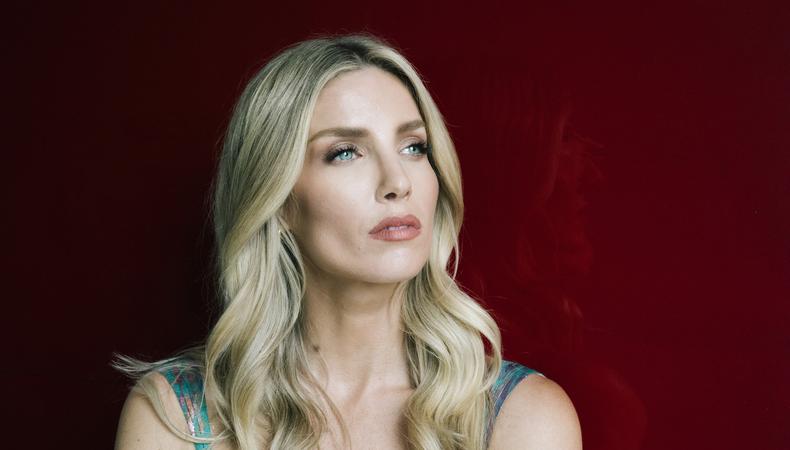 Starring opposite Russell Crowe on Showtime’s new limited series “The Loudest Voice,” Annabelle Wallis plays Laurie Luhn, one-time director of booking for Fox News. The timely, hot-button series from creators Tom McCarthy and Alex Metcalf follows disgraced Fox News founder Roger Ailes’ rise to power through to his string of sexual misconduct allegations, including Luhn’s claims that he sexually harassed her for nearly 20 years. A breakout role for the U.K. actor (previous credits include “Peaky Blinders,” “The Tudors,” and “The Mummy”), Wallis dropped by Backstage HQ to reveal her tips for nailing auditions, playing real-life figures, and relaxing after a long day on the job.

When you’re starting out, don’t be afraid to make big moves.
“As I was applying for drama school, I got scouted for a children’s TV show as a presenter, and I was like—ever the crafty person—‘Why not just go down this road?’ Through that, I told them that I didn’t want to be a TV presenter—I was an actress—and they introduced me to an agent, and I walked in and said, ‘If I don’t get the first job you send me out on an audition for, you don’t have to [sign me].’ I was bold. The bravery of youth is so much your asset right now. That kind of unwavering self-belief that only gets chipped away as you get older and older and actually start to work. So I think that bravery really got me an agent. I just knew in my heart that it was my path.”

READ: How Russell Crowe Transformed Into Roger Ailes for ‘The Loudest Voice’

To really nail an audition, considering skipping the espresso.
“I make sure I learn the lines; I mean, back to front. Then you can leave that at the door and really feel the truth and have that resonate in your eyes and really be in the moment and not have to think about it. I can’t cold read. I’m too honest in my performances and I leave the moment so much that if I’m thinking of anything else, it’s gone. I can’t get away with it. I have to go there. So I would say that people respond to the truth, and if you tell the truth, it shows in your eyes. It shows in your body. It’s like your soul revealing itself, and that is so powerful. So I would say just learn your lines—and don’t have coffee. You get anxious before, and I get so hyper, I get so excited I get to perform, that I would over-rev myself, and it was perhaps not as subtle as I would have liked. So, you know, as a tool? Just whoa on the coffee. The adrenaline will come when you get to the door.”

Playing a real-life figure can be intimidating, but rewarding.
“You feel hugely indebted to them and to their story. There’s a real sense of responsibility. And the more I read about Laurie Luhn, and the more information I got to tackle, it really just informed a whole side of things that I wasn’t expecting. I felt very protective of her. I felt very compelled by the pressure cooker environment she put herself in via the male environment she was working in and this sense of trying to find a validation or trying to just be seen, and when a big power like Roger came along and saw her, it opened up her world in many ways and closed many doors in many ways. So just off the page, she was incredibly compelling. And I had six hours of interview tape that Gabriel Sherman, who wrote the book, gave me, and that was incredibly insightful.”

With sensitive material, it’s important to unwind.
“It was hard not to take [Luhn] home because, unfortunately, I’ve heard so many stories of women who’ve gone through what Laurie did and [who] experienced abuse. I’m very fortunate that in my own life I didn’t, but I felt so attached to the story because it was so much in the conversations I was having with my female friends, with my actress friends, and when I found myself in those moments with Russell and when we were really immersed in the scenes—just to think that somebody went through that…. We had crew members, men who walked out because they were so uncomfortable. It brought up a lot for people. So, I would say that with her, it was hard to leave her behind because it was so important not to. And I would say: a glass of red wine, a hot bath. Music helps me. It takes me out. It kind of moves me into a different energy. Alone time to give yourself a moment to reground.”

Seek great roles to play, but learn from the bad ones, too.
“All those terrible jobs or terrible auditions, it’s all tool to your craft. It gives you a deeper well to draw from and it perfects your craft because you have to work harder to make it better. When you get a good script, you’re not even acting. You’re just saying great words. It actually gets easier. So I would say now, for anyone reading Backstage and pursuing a career, anything you do is going to affect your craft. And being able to create with your friends—it’s an amazing age for actors to get their own content out there. Use it.”