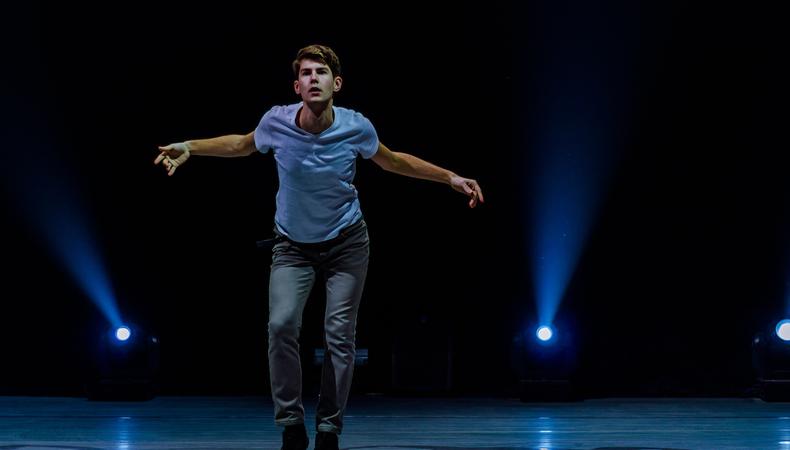 In New York, hundreds of young, aspiring professional actors, dancers, and singers gather every year from all over the world to audition for admission into the UCLA School of Theater, Film and Television’s undergraduate program.

Considering that a handful of applicants are chosen out of a pool of thousands, one might expect a tense space, but it’s quite the opposite. Auditions take place in sleek, bright studios with windows overlooking Times Square. The relaxed environment creates a momentum of positivity that has the potential to bring out the best in each audition.

Brian Kite, chair of UCLA TFT’s Department of Theater, and a former UCLA student, reflects on the best mindset to have going in: “Be who you are, rather than show who you are. Don’t just tell us what you think we want to hear.”

The theater audition consists of four stages: dance, singing, acting, and a personal interview. Students are taught a series of steps on the fly to Gloria Estefan’s “Conga,” then encouraged to add a personal touch of improvisation to their performances a few minutes later.

Professor Nicholas Gunn oversees the dance audition and describes it as the area in which the greatest amount of initial skill is needed, but the potential of the student to grow, and their ability to physically improvise, are prioritized over the amount of formal dance training a student may possess.

Everything you need to know about acting schools and colleges.

Conducted by Professor Jeremy Mann, the singing audition shares some of these qualities. Song choice is not essential, but bringing personality to the performance is. Acting the emotional material in a song is a hybrid skill required of musical theater. “We’re not just looking for their voice, we’re looking for their acting as well,” Kite says. “Is there truth behind what they’re saying?”

Along with dance, the singing audition serves to drain excess nervous energy out of prospective students and provide mental clarity for the more intellectual nature of the acting portion.

Professor Perry Daniel teaches acting as well as movement classes, directs for the Summer Acting and Performance Institute, and conducts the third stage of the audition. Along with preparation, her main concern is a student’s “willingness to play given a new adjustment.”

The contrast between the two songs presented will provide insight into a student’s range, but be ready to run with prompts designed to create tonal shifts in your monologue delivery, too. In one case, Daniel asked a student who’d read a monologue about a familial confrontation to try it as if “metal weights were tied to his wrists,” embodying the power of the character’s emotional exhaustion. Although his physicality reduced drastically, the subsequent read was undeniably more compelling. Daniel’s approach to auditioning students is relaxed and surprisingly nonjudgmental, given the circumstances.

“You can tell a lot about a program by how the interview process is run,” she says. “I try to make it as warm and welcoming an opportunity as possible.”

Finally, the personal interview determines what elements a candidate would bring to the student body as a person. Occurring after the more intense components of the audition, they are informal but infused with bigger questions on the nature of inspiration and identity. Topics of discussion include actors’ responsibilities to society and the extent to which personal life experience shapes acting style. The interview can often be the most revealing section in the entire audition—but only after combining the results of all four categories does a complete picture of an auditioning student emerge.

It’s a diverse process. “You need to be prepared, but flexible and willing to change,” Kite suggests. “Theater is about artists coming together to create something that on their own neither would have thought to bring into existence.”

Ready to get to work? Check out Backstage’s dance audition listings!