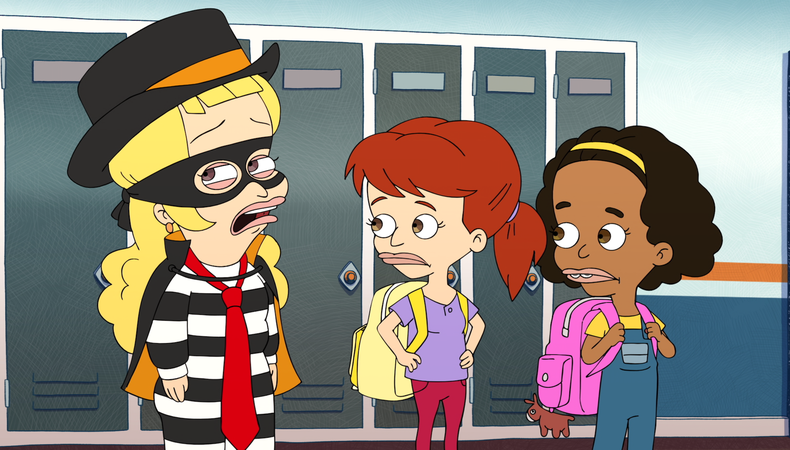 It’s not an oxymoron: When it comes to voiceover acting for an animated series, the less cartoonish, the better. At least that’s true for “Big Mouth,” the sardonic Netflix comedy that features vocal talent including Maya Rudolph, Jordan Peele, and Nick Kroll, the latter of whom co-created the series with Andrew Goldberg. Goldberg, an executive producer on the Emmy-nominated streamer, knows all about compelling VO performance, as well as how to actually give one in the booth.

“Executive producer” is kind of nebulous; can you describe what it is you do?
On our show in particular, there’s four of us. There’s myself, there’s Nick Kroll—who I grew up with and I’ve known since I was 6—and then there’s Mark Levin and Jennifer Flackett, who I’ve known for about 20 years. And the four of us really operate as the showrunners. In some cases, we work together as a unit, like if we’re breaking a story. In some cases, we kind of divide and conquer and have different areas of expertise. Like, Nick and Jen and I, when we’re writing, we really spend all day in the writers’ room. Mark spends a lot of days with the editors and handles a lot of the oversight of the budget and personnel on that end. Nick is super hands-on with casting. So, EP can mean different things. In my case, it’s really like the person who, along with my partners, is in charge of making the show and kind of running the small company that is the production of “Big Mouth.”

LISTEN: Nick Kroll’s Guide to Creating Your Own Work

In your expert opinion, what makes for a compelling voiceover performance?
What we’re always striving for is this sense of realism and naturalism. That’s just the voice of our show. Like really bizarre, strange things happen, [but] there are certain intangible things, like some people just have a voice that cuts through the noise of animation and really resonates. I think Jason Mantzoukas is a great example of that. He’s super funny and a great improviser, a terrific actor, but he also just has this voice that has so much behind it that really rings through everything. There are also people like Nick and Maya Rudolph and Jenny Slate and Jordan Peele who have this quality where they’re able to do multiple characters and are really unrecognizable as the same performer doing the characters, which is another incredible tool set. John Mulaney is another person whose voice is just so engaging that it really brings you into any character. And Jessi Klein is in that category, too: somebody who feels so real that you buy immediately in her emotional situation because she just seems like a real, authentic person having these experiences.

Voice acting is notoriously difficult in part due to the isolation of being in the booth. What advice do you have for actors in that sense?
Not being a performer myself, I can imagine how challenging it is to kind of act by yourself. Maybe you have somebody feeding you the lines through the intercom, but it’s obviously not the same. In my experience watching actors on our show, especially when they’re recording by themselves, we do try to put somebody else actually in the booth, kind of occupying the physical space with them, because I think that is helpful. Also, I can really tell when there’s a scene or a situation and the actor really gets it and is relating to it as something that they’ve experienced. You can tell when they’re not just trying to do a voice but trying to really be in the moment. That’s what we’re often looking for.

In that sense, voice acting is just like regular acting, no?
Yeah, it is, but I could see why it would be more challenging to do it in just a booth, in your clothes. There’s something that actors love about just showing up and not having to go through the hair and makeup and wait for the lighting and everything. That’s one of the real draws of acting for animation. But I could see how, creatively, it would be challenging, because, in some ways, the costumes and the makeup and the set can help you get into the moment.

To that end, what advice would you offer to someone who wants to break into voice acting?
There’s the nuts and bolts thing about producing an engaging voiceover reel. I would say if you’re not a writer, it might be worth getting a writer friend or hiring somebody to write the copy for your reel, because I’ve definitely heard some where I’ve thought, I can’t judge the acting because as a writer, I’m just focused on the writing. Then, I think just creatively, a lot of our performers come from UCB or another improv background, which seems to me like a really outstanding way to grow your craft for comedy and also for voiceover comedy, because it gets you into this really collaborative mindset where you’re able to go with any premise and add to it in a way that is super useful, whether you’re improvising in the booth or not. I think sketch comedy is also a cousin to that in terms of establishing a premise and committing to it. I also think stand-ups are super successful at this; they have this experience where they know how to stand up in front of a group of people and really captivate them and get their attention, mostly just with their voice. And they’re also, at the same time, honing their voice, which comes through when they’re performing, especially in voiceover.

How did you get started working in animation?
I started my career way back in my 20s; I was an assistant at 20th Century Fox in the comedy department. My bosses knew that I didn’t want to be an executive, that I wanted to be a writer, and they started introducing me to writers. One of the people they introduced me to was Seth MacFarlane, and, fortunately, around that time he needed an assistant. It was around when “Family Guy” was coming back, so I started working for him and I wrote a couple of scripts for “Family Guy,” and then I got promoted and I spent eight seasons as a writer there. A little bit accidentally, I fell into it, but I really enjoy it. I learned so much from “Family Guy”—and then even more with “Big Mouth”—about how animated shows are made, and I love the medium. I have so much respect for the artists and directors who put the show together visually, as somebody who cannot draw a lick. And it’s a great medium for a writer, too. There’s a nice thing with animation as a writer, where you write it and then it goes away for a couple months while it’s storyboarded and turned into an animatic, and you really get the chance to come back to it with fresh eyes, which is something you don’t necessarily get in live-action.

To that end, can you walk me through how one of these episodes actually gets made?
It starts in the writers’ room, in very similar ways to live-action sitcoms, where we have an idea for a story, we break it down into scenes as a group, and figure out what the story looks like as a whole. One of our writers or a couple of our writers will take it and write a first draft, then we sit around as a big group and rewrite it together in the room. That’s kind of our big creative moment for an episode before the table read. Then we do the table read, which is a great opportunity to hear it and get a sense of what’s working, what’s not working, what jokes people like—and then we do a rewrite. The difference comes in when, instead of doing a shoot, we do a record. And for us, because we like to do a lot of improv because we have these great improv actors in our cast, we try to get people together in the booth when we can so they can play off each other and open up the script a little. Then, editorially, we put together a “radio play,” which is just the audio of the episode, which is a hugely important part in the animation process. The [animation] artists will storyboard the episode to the radio play. And then that, along with very detailed timing notes and all our color designs, get shipped to our overseas studio in Korea, where the physical animation is done. They have about 14–16 weeks per episode, and then it comes back to us and we do post-production in-house. And that’s an episode!

Casey Mink
Casey Mink is the senior staff writer at Backstage. When she's not writing about television, film, or theater, she is definitely somewhere watching it.
END_OF_DOCUMENT_TOKEN_TO_BE_REPLACED