How to Translate a Play, According to the Man Behind Broadway’s ‘The Height of the Storm’ 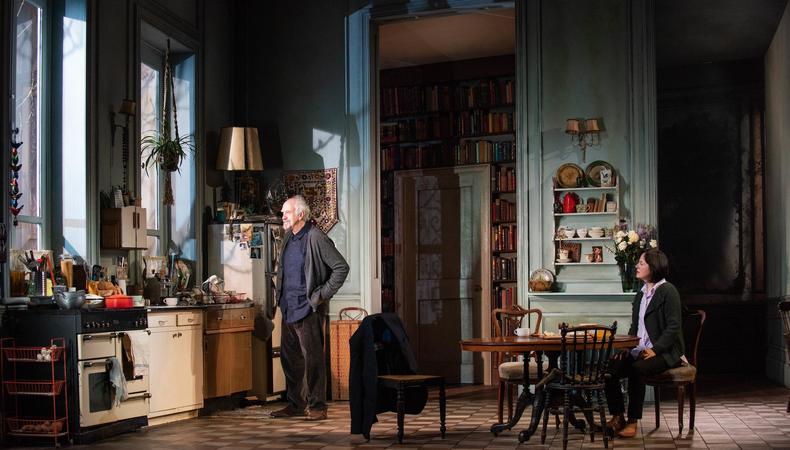 Translating Chekhov or Ibsen is one thing—it’s safe to say the long-dead playwrights will have few objections. But what about translating the work of a writer who is alive and still working at the top of their game? Christopher Hampton, one of the preeminent English translators who is also a prolific playwright in his own right, has trod that line with aplomb. Here, Hampton speaks with Backstage about his latest task in translation, Florian Zeller’s “The Height of the Storm” (at MTC’s Friedman Theatre), his writing advice for all, and how actors define the entirety of his work.

How would you describe what a translator does?
I imagine my job as to be as invisible as possible, and to present the play so that it will work, to the best effect, with an English-speaking audience.

Obviously, there are many, but what are some of the major differences in writing your own plays and translating someone else’s?
Well, if you write your own plays, it’s kind of a small number of huge decisions, and if you’re translating a play, it’s a huge number of small decisions. It’s like doing embroidery or a crossword or something. It’s finding the right word all the time—you kind of write faster when you’re writing for yourself. One is a very good complement to the other. They do each other good; working on other people’s texts is enriching for your own work.

In what ways has translation informed your own plays?
I started with the classics, so I started off doing “A Doll’s House” and “Hedda Gabler” and “Uncle Vanya,” and if you spend a couple of months with those plays, which I did when I was very young, you learn a lot about structure, about strategies of the theater.

What is the process of translating work by a living writer?
What I do is a draft of the translation—a first draft. I send it to them, and then I usually go and see them and we discuss it. The results are different. It’s more complicated a process with [frequent collaborator] Yasmina Reza. I’ve found that Florian is very supportive, and that’s to say that nothing really tends to trouble him and, typically, we’ll only have a very few things to discuss once he’s read the text. I think “The Height of the Storm” was probably the most difficult of the plays I’ve done of his, because it’s more poetic and more abstract. In some of his plays, the language really serves the theatricality of the play and how it’s set out, and therefore the language wants to be as simple and transparent as possible. But “The Height of the Storm” was a little more demanding.

What was unique about translating “Height of the Storm” compared to other translations you’ve done?
I’m very pleased to say that I saw it before I read it. I think one of the reasons he wrote it was to write a part for Robert Hirsch, who was then about 91, and who was the actor who created the part in [Zeller’s 2012 play] “The Father.” He just decided he would like to work with him again, and that was his point of departure, in a way. So I came to Paris and saw the play when it first opened, and I found it incredibly moving and mysterious, but I think it was one of those plays that was much better to see first than to have started off by reading it. Other pieces of his, I’ve read first and that’s been fine, but this particular one, it’s hard to define what makes it work so powerfully.

To switch gears, when you’re in the writing process—be it for an original work or translation—how much are you considering the actor when you’re putting words on the page?
I mean, totally. In other words, I would sort of define my profession as writing for actors. Sometimes you know in advance the actor you’re writing for, and that’s always helpful. I sort of imagine that so-and-so will play the part [when I’m writing], and then it doesn’t really matter if they do or they don’t, because their voice in your ear is a help when you’re working. I like getting to rehearsals. I’ve always liked working with actors, so I feel I’m really, in that sense, a man of the theater.

When you are in the rehearsal phase, are you open to your work being informed or even changed by the actors?
Very much so. I’m very happy to hear what they have to say, and, of course, I do this process normally with the contemporary plays that have been done in New York and elsewhere in America. There are two different texts that exist: There’s an English text and an American text, and, in fact, they often differ quite significantly.

In what ways do they differ?
It’s kind of a different language. It started with “Art”; Yasmina came over and sat with the actors before rehearsals started, and we worked through the script with the director and the actors and just translated it into American. I always try to do that when a play is being done for the first time in America. This one is different because we’re bringing our own English company.

Do you find there are major differences between American and U.K. audiences?
No, I don’t think so. English audiences and American audiences react differently. They laugh at different things, and some jokes strike an English audience more than they do an American audience and vice-versa, but it’s a sort of mystery, really. For a play to work, you need the audience to react in a particular way, and if the play is done well, it doesn’t really make much difference what country you’re doing it in.

What advice would you give a first-time translator?
I think, in general, the profession of translator is very much underrated and undervalued, and I think they’re better treated in the theater than, for example, in the publishing world. Translators of novels and so on, people don’t really understand how creative a process it is. In the ’60s, the Royal Court Theatre in London decided they would put on the great Chekhov plays, but for the first time, they asked playwrights to translate them rather than using the academic translations. They started by asking three different playwrights to do three different Chekhov plays, and I got asked to do “Uncle Vanya.” What’s important in a play is to get a translator who is able to write dialogue, and sometimes somebody who knows precisely what the meaning of the line might be is not necessarily good at writing dialogue for actors. It makes sense to have playwrights rather than academic translators.

Casey Mink
Casey Mink is the senior staff writer at Backstage. When she's not writing about television, film, or theater, she is definitely somewhere watching it.
END_OF_DOCUMENT_TOKEN_TO_BE_REPLACED