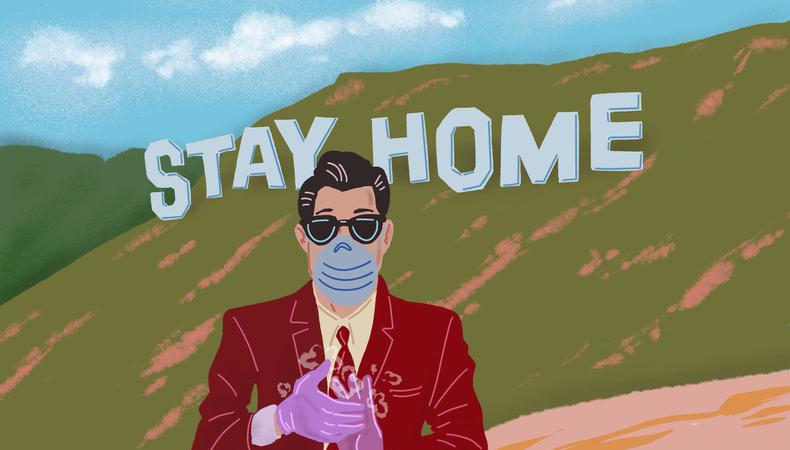 It happened so quickly. Within days, rumors became fact and concern grew into fear. Life suddenly changed in ways none of us could’ve imagined. Watching the effects of the COVID-19 pandemic hitting the U.S. was watching the domino effect in real time. One production stopped, which led to a few more shutting down, and that chain continued until every film and TV set became a ghost town. And that’s not to mention the theatrical productions canceled, the press tours postponed, the feature film releases pushed—the list goes on and on. The entertainment industry went from full speed ahead to a dead stop in record time.

My agency saw the writing on the wall, and we switched to a work-from-home model early on. But that can only last so long. When breakdowns dry up and there’s no work to book, commissions will cease to exist, and I’m fairly certain I’ll be collecting unemployment by the time you read this. (I haven’t done that in ages, so I have a lot to learn. Actors file all the time, right? Maybe I should call one of my clients for advice…)

Here’s the sad truth about this situation: Tragedy has no sense of timing. It doesn’t care about your plans. The damn thing just shows up when you least expect it.

Right before the world’s fan got covered in feces, one of my clients booked a guest star role on a network show that shoots in Atlanta. Mike had to be a local hire, but that was fine, because the money would cover his expenses and it was a huge opportunity. He was a happy actor when his flight left Los Angeles. But that changed about 2,000 miles later, when Mike’s plane landed in Atlanta and he listened to his voicemail. There was a message from the production office: “Sorry, we’re shutting down. Don’t get on that flight.”

There’s a rep at my company who focuses exclusively on Equity. I remember how hard the guy worked to get one of our younger clients seen at a prestigious theater company. His efforts paid off, and the actor booked the job, a lead at one of the few stages in L.A. that attracts a lot of industry eyeballs. The Champagne was popped and a celebration was had. Sadly, production shut down two weeks into rehearsal.

And on a personal note, yours truly was planning to spend two weeks in Italy this spring visiting family members I haven’t seen in over a decade. Pilot season was brutal, so this trip is all I’ve been thinking about. Now, all I can do is pray that everyone there is safe.

Every agent I know has stories like these. Plans that went in the toilet. Accomplishments that turned into frustrations. It breaks our hearts. (And yes, agents have hearts. A cardiologist in Sweden proved it just last year.)

I work in Hollywood, so I don’t know much about pandemics, but I do know one thing: We’re going to get past this. The worm will turn—it always does. Pretty soon, I’ll be back behind my desk closing deals, and you’ll be back at work finding new ways to drive me crazy. Until then, take care of yourself.