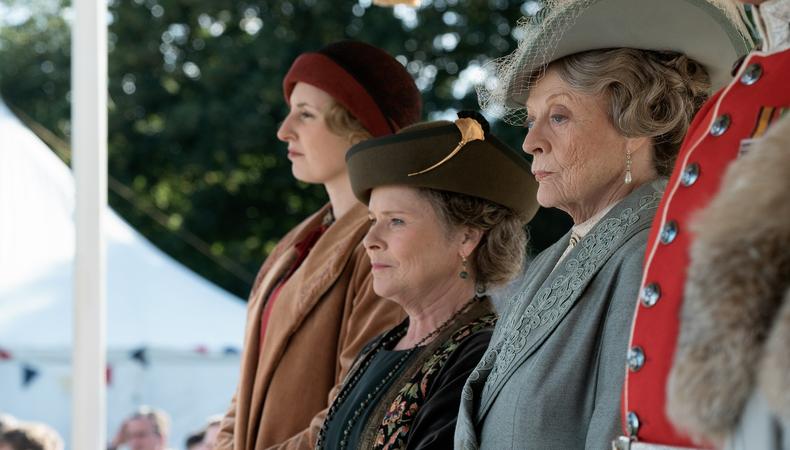 How does the long-running British television drama “Downton Abbey” transfer to the big screen? Well, it gets bigger. The feature film provides cinematic, aerial shots of the titular estate, grand costumes, and ample time for entangled subplots. At the center of it all is the sprawling cast—a tight-knit ensemble that has long worked together to comprise a winning team.

The film from the show’s creator, Julian Fellowes, and director Michael Engler, who helmed the series finale, is the cherry on top for fans of the 15-time Emmy-winning ITV/PBS drama. The beloved cast garnered three SAG awards for outstanding performance by an ensemble in a drama series during the show’s six-season run, and they reunite for the film like old friends after a four-year hiatus.

The residents and staffers of Downton Abbey pull their weight in preparation for the film’s main event—the English monarchy coming to the titular Yorkshire estate for an overnight visit. It’s a high-stakes, once-in-a-lifetime honor that requires all the best players to represent Downton. Jim Carter’s Mr. Carson, Downton’s erstwhile butler, comes out of retirement for the excitement. Suited in a tailcoat and white bow tie, he’s unflappable. He heads up the preparations, usurping the duties of the newly appointed head butler Thomas Barrow (Rob James-Collier).

When the King George V and Queen Mary arrive with an entourage in tow, complete with their own head butler and a pompous French chef, the Downton Abbey staff come together to show the special guests that they, too, can provide the royal treatment. The mild-mannered lady’s maid Anna Bates (Golden Globe winner Joanne Froggatt) leads the charge in the so-called “revolution,” with a ploy to regain control of the kitchen and serving posts.

Between polishing the silver and procuring foodstuffs, there’s also a secret pregnancy, a thwarted assassination attempt, and even a budding romance to keep the Crawley family and their servants busy. The stately manor’s Lady Mary, played with poise by the inimitable Michelle Dockery, makes sure to care for the Downton crew amidst the commotion. She even lends her opulent sleeping quarters to Anna and her husband (Brendan Coyle) when Anna goes into labor as the royal soirée unfolds downstairs.

Perhaps the most important mark of a good team is its ability to bring in new players. For the film, the principal cast was joined by a number of newcomers, including Oscar nominee Imelda Staunton and Tuppence Middleton (“Sense8”), who both imbue more strains of drama—a hushed family secret and a ripple in the Crawley line of inheritance.

Even with these plot entanglements, two-time Academy Award winner Maggie Smith, the acerbic Dowager Countess of Grantham, still manages to steal the spotlight. When Tom Branson (Allen Leech) shows interest in a distant Crawley relative who is actually a stakeholder in the family inheritance, she takes it upon herself to promote a correspondence between the two. “I won’t dislike it. I’ll lick the stamps myself,” she quips.

Indeed, the movie points to a future for the Downton Abbey estate—and possibly to a continuation of the upstairs and downstairs antics that propelled this ensemble to the big screen.