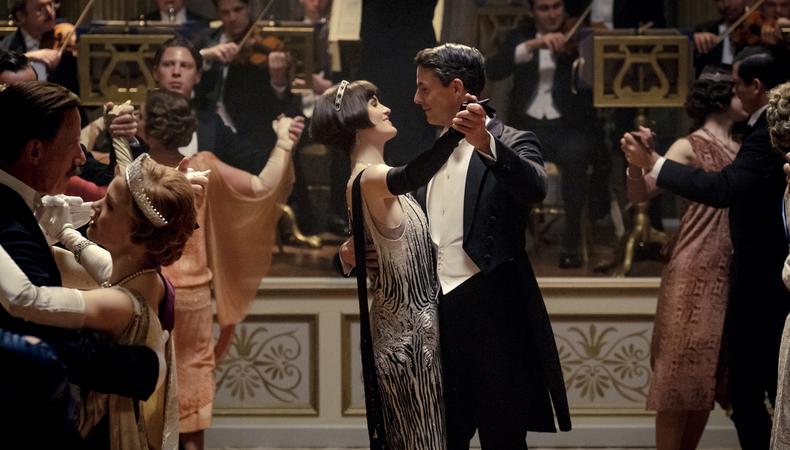 Michael Engler was an avid fan of “Downton Abbey” before he took a seat in the director’s chair for the long-running series. “I really knew every bit of it,” Engler recalls. He ultimately directed three episodes, plus the series finale in 2015, and now he’s returned to helm the much-anticipated “Downton Abbey” film, coming to theaters Sept. 20.

The full-length feature takes place in 1927 and follows the Crawley family and the servants at Downton Abbey as they prepare to welcome King George and Queen Mary to the Yorkshire estate. While the royal visit is the movie’s main event, the film also delves into the drama behind the scenes—both upstairs and downstairs—at the stately manor. There’s plenty of scheming, romance, repartee, and, of course, enviable costumes.

Fans will be delighted that the award-winning show’s beloved principal cast members have all returned for the big-screen follow-up. The task of wrangling the actors’ schedules, though, was a tall order.

“The amazing success of ‘Downton’ changed so many people’s lives and careers that they were just all so busy and all over the world,” explains Engler. For instance, Lesley Nicol, who plays the cook Mrs. Patmore, was splitting her time between sets in England and India, where she was shooting a television series.

Reconvening the cast and crew at Highclere Castle to shoot the film “had the atmosphere of a family reunion, in the best sense,” Engler says. The film also welcomed some new faces, including Stephen Campbell Moore, David Haig, Geraldine James, Simon Jones, Tuppence Middleton, Kate Phillips, and Imelda Staunton. “They knew they were being invited onto a very winning team, and so they didn’t want to be the one who turned out to not fit in somehow,” says Engler of the nervous newcomers. “But it couldn’t have been a more welcoming group.”

As an American, Engler was also nervous at first to join the “Downton Abbey” team. He worked with the show’s historian, Alastair Bruce, to learn about the social hierarchy and expected mannerisms in early 20th-century England. Engler’s outsider perspective proved surprisingly beneficial, and he found along the way that the “Downton Abbey” world transcends its time period and culture.

“The reason I love this show, and why it has millions of fans all over the world, is because it is so universal,” he says. “The relationships, the stories, the family, the workplace situations, and being committed to making something bigger than yourself run smoothly.”

There were challenges transferring the “Downton Abbey” saga to the big screen, however, the biggest of which was breaking out of the rhythm of episodic storytelling. Television tends to move more quickly and leave viewers with unanswered questions, explains Engler, whose TV credits include “Unbreakable Kimmy Schmidt” and “30 Rock,” among others. The format of the TV series allowed for the members of the large ensemble to each have individual storylines, which sometimes stretched over numerous episodes. Here, the two-hour film weaves together multiple subplots that each connect to the film’s overarching storyline about the royal visit. “It’s a masterful piece of writing,” Engler says of Julian Fellowes’ script.

The show’s swelling theme song and sumptuous design had a cinematic feel, but the film ups the ante. “Visually, [the show] had that richness, that scale of life, the detail, and the gloss of things, you know?” says the director. “The houses, the costumes, the props—everything. And so the question was, how do we play with it, both as filmmakers and storytellers, in ways that it can feel like it can earn its place on the big screen?”

Engler notes that the film is more stylistically varied and cinematically playful, and it raises the stakes visually. “We’re going to give you things we could never have given you on television.”

While there are no current plans for future “Downton Abbey” projects, the cast and crew were grateful for the opportunity to reconnect for the film. “It is probably the greatest honor of my life, professionally,” Engler says of being asked to come back and direct. He advises emerging directors to surround themselves with people whose work they admire, and to share their interest in projects. “I’m often surprised at how open people are when you express your passion for a project…. People are often willing to take a risk because of that.”

Ten years ago, Engler couldn’t imagine working on “Downton Abbey,” he admits. “I dreamed of it, but I couldn’t imagine it happening. I just said, ‘This is something I want to do. Is there a way to do it? Is it ridiculous, or would somebody consider it possible?’ I think because I pursued it in that way, it happened.”