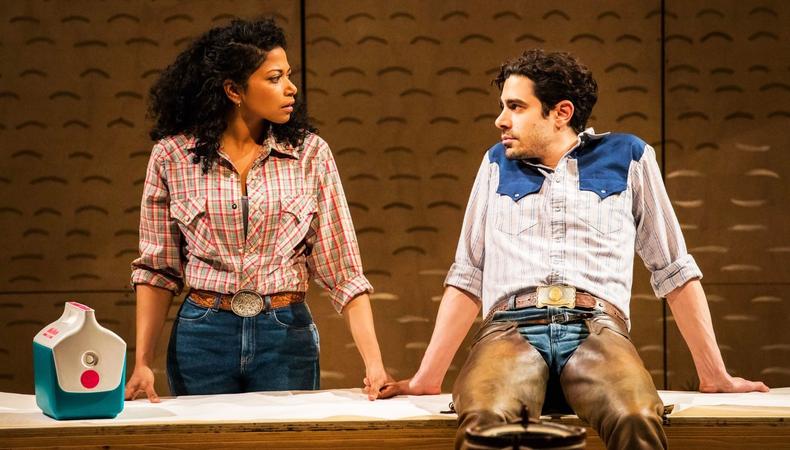 Your theater “Golden Globe” nominees are…
The Drama Desk Awards, informally known as the Golden Globes of theater as they recognize productions both on and Off-Broadway, have announced their 2019 nominees. Typically seen as a precursor to the Tony nominations (announced April 30), this year’s nominees included 12 nods for “Oklahoma!,” and 11 for “Tootsie,” with “The Prom,” and “Be More Chill” also recognized for best musical. On the play side, “The Ferryman” and “What the Constitution Means to Me” were both nominated for best play, while notably missing from the lineup was Broadway’s “To Kill a Mockingbird.” Additionally, on the acting front, Tony’s most unpredictable category currently is leading actor in a play, which will not be impacted at all by the Drama Desk Awards, as every nominee is from an Off-Broadway production. (Gold Derby)

Outer Critics Circle nominees are announced.
Also announced this week were nominees for the Outer Critics Circle Awards, with new musical “Hadestown” leading the pack with 12 nominations, followed closely by “Tootsie” with 10. Daniel Fish’s inventive “Oklahoma!” notched six nods, with “All My Sons,” “The Ferryman,” and “Ink,” each nabbing five nominations. Additionally, the Puppetry Team of “King Kong” as well as the York Theatre Company for their 50th anniversary were announced as Special Achievement Award winners. (Playbill)

“Avengers: Endgame” debut busts China’s scales.
In its opening day in China, “Avengers: Engame”—the conclusion to over a decade of Marvel movies—rung in $107 millio, leading predictions to be in the $1 billion area worldwide after the film opens in theaters everywhere this weekend. The film already set records in China for most pre-sold tickets, and has now set the record for biggest opening day in Chinese cinematic history. (Variety)

The WGA and ATA are still battling it out.
The Writers Guild of America and the Association of Talent Agents are still going head to head, with the former refusing to back down from its stance that packaging fees are cheating writers. Agents are now threatening to sue writers the writers that fire them, and more, deals have been attempted, but no resolution has been reached yet. This is ongoing—stay tuned here at Backstage. (Backstage)

The Academy makes a change, but not the one that was expected.
The Academy has ruled against new eligibility rules that would prevent streaming services such as Netflix, Amazon, Hulu and other digital platforms from being able to even enter into the competition. Instead of changing eligibility as many speculated, the only change will be to the title of the award for “Best Foreign Language Film,” which will now be “Best International Feature Film” so as to be more inclusive. (Variety)

“Maisel” creators to spearhead a new Amazon project.
Amy Sherman-Palladino and husband Daniel Palladino, creators of Amazon’s Emmy-winning hit ‘The Marvelous Mrs. Maisel,” are set to develop another charged piece. The duo has signed on to adapt Mary Gabriel’s novel “Ninth Street Women,” which will be the first project under their renewed contract with Amazon, which they signed in February. No casting has been announced at this time. (The Hollywood Reporter)

Bill Pohlad signs on to direct a new musical biopic.
Producer Bill Pohlad is set to write and direct a new biopic about the lives and music of duo Donnie and Joe Emerson. Currently titled “Dreamin’ Wild,” the musical project will be spearheaded on the producing side “Green Book” brawn Jim Burke. This will mark Pohlad’s second directorial credit, after 2014’s “Love & Mercy.” No actors are attached to the project just yet. (The Hollywood Reporter)