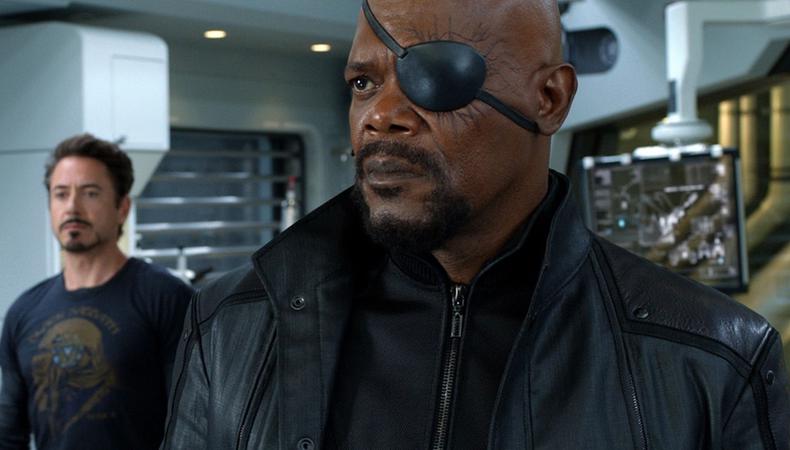 Nick Fury Disney+ Series
The council has made a decision. There is never enough Samuel L. Jackson or Nick Fury, so Disney and Marvel are planning on fixing that. The actor will reportedly reprise his role as Nick Fury in a new Marvel Series currently in development at Disney+, according to Variety. Like most of Marvel’s series, the plot details are being kept under wraps, but Jackson will reportedly star with Kyle Bradstreet attached to write and executive produce. It seems very unlikely the project won’t go to series, so be sure to keep an eye out on casting news from veteran Marvel casting director Sarah Finn.

“The Unbearable Weight of Massive Talent”
Tiffany Haddish is adding to the list of massive talent that is the cast of “The Unbearable Weight of Massive Talent.” The star has joined the meta action-comedy opposite Nicolas Cage, Pedro Pascal, and Sharon Horgan. Written by Tom Gormican and Kevin Etten and directed by Gormican, the Lionsgate feature follows a fictionalized, creatively unfulfilled Cage who, in the face of financial ruin, accepts a $1 million offer to attend the birthday of a superfan (played by Pascal), which takes a dangerous turn. Haddish will play eccentric rogue government agent Vivian, who forces Cage to go undercover in a crazy, off-book, last-ditch effort to bring down one of the largest criminal organizations in Europe. Production on “The Unbearable Weight of Massive Talent” is expected to take place later this fall. Jessica Kelly and Mary Vernieu are the casting directors.

“The Sky Is Everywhere”
A24 and Apple are continuing their partnership and have begun lining up the cast for Apple’s next original. Cherry Jones and Jason Segel will join Grace Kaufman in “The Sky Is Everywhere,” based on the novel by Jandy Nelson. Nelson will adapt the script with Josephine Decker attached to direct. The movie, like the novel, will follow Lennie (Kaufman), a teen who is working through the loss of her sister Bailey. The film joins Apple and A24’s soon-to-premiere “On the Rocks,” directed by Sofia Coppola and starring Rashida Jones and Bill Murray. There’s no word yet on when “The Sky Is Everywhere” will begin production, but Jessica Kelly from Chrystie Street Casting will be on the job once it goes into pre-production.

“Maestro”
The band is nearly warmed up for Bradley Cooper’s “Maestro,” his previously announced Leonard Bernstein Netflix biopic. The director-actor has found his onscreen partner in Carey Mulligan, who will play Felicia Montealegre Cohn Bernstein, the wife of the legendary composer. As previously reported, Cooper will play Bernstein in the film, which he also co-wrote with Oscar winner Josh Singer (“Spotlight”). Maestro will seemingly focus mainly on the complex and tumultuous love story of Leonard and Felicia. Cooper has been working with the Bernstein family and estate for three years to develop the piece, which will begin shooting next spring. No casting team has been announced, but Cooper had great success with “A Star Is Born” casting team Betty Mae, Inc., and it would be of no surprise if he wanted to collaborate again.

“Spiderhead”
Also at Netflix, Joseph Kosinski has pulled together an all-star cast for his adaptation of the George Saunders short story “Spiderhead.” Chris Hemsworth, Jurnee Smollett, and Miles Teller have joined the project in lead roles. Adapted by Rhett Reese and Paul Wernick (“Deadpool,” “Zombieland”), “Spiderhead” is set in the near future when convicts are offered the chance to volunteer as medical subjects in hopes of shortening their sentences and where two prisoners become the test patients for emotion-altering drugs. This is next on Kosinski’s slate after directing “Top Gun: Maverick,” featuring Teller. No further casting has been announced.

“Peter Pan”
“Black-Ish” and “Grown-ish” star Yara Shahidi will bring some magic to the big screen soon as she steps into the role of Tinkerbell for Disney’s live-action “Peter Pan” movie. The David Lowery-directed “Peter Pan and Wendy” will also star Alexander Molony and Ever Anderson as the eponymous characters, as well as Jude Law, who will play Captain Hook. Lowery co-wrote with Toby Halbrooks. The film is aiming for a theatrical release rather than a Disney+ streaming release, according to Deadline’s sources. Debra Zane is the casting director.

“Original Sin”
A few weeks after reporting that a “Pretty Little Liars” reboot was in the works from “Riverdale” creator Roberto Aguirre-Sacasa and Alloy Entertainment, the project has officially been given the go-ahead at HBO Max. Titled “Original Sin,” the new series will take place 20 years later and center around a group of teen girls “who find themselves tormented by an unknown assailant and made to pay for the secret sin their parents committed two decades ago.” Aguirre-Sacasa will be writing the reboot-revival with his Muckle Man Productions, original producer Alloy Entertainment, and Warner Bros. Television producing. The creator typically works with Rapaport/Baldasare on his TV projects.