Trust Us: It’s Not a Bad Thing to Demand More Money for Your Work 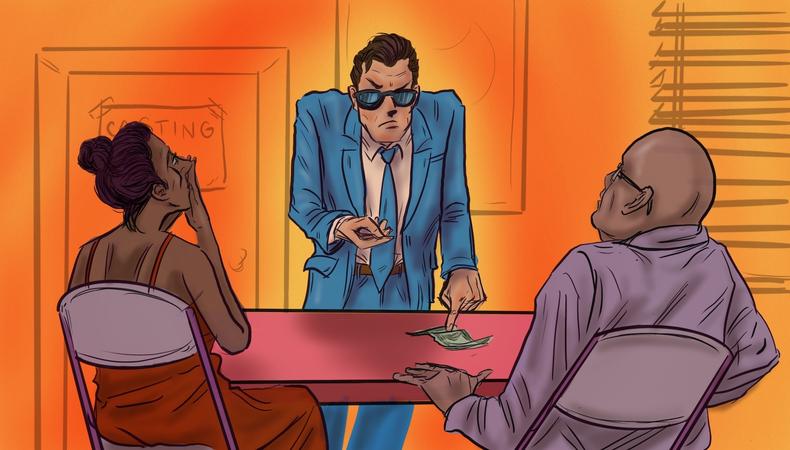 When I was in my 20s, I worked at a post-production house in Chicago. It was a fun gig, and the owner liked my work ethic. As a result, he would constantly give me extra responsibilities. What he didn’t give me was more money. So, after knocking back a few drinks, I decided to ask for a raise.

Boy, was I nervous. It was my first real job out of college. My young brain concluded he would fire me on the spot for being such an ungrateful punk. On the day we finally talked, I was shaking like a leaf. I couldn’t get my thoughts straight, and I made a complete fool out of myself. But you know what? I got the raise.

Now that I’m a Hollywood agent, I look back on those days and smile. It was such an innocent time. I didn’t understand my own worth, and it had never occurred to me that someone else would. Lesson learned.

One of the things I’ve noticed over the years is that actors, even experienced ones, get just as nervous when an offer comes in and I suggest we hold out for more money. Actors go through lean times when they’re starting out, so the concept of demanding more from someone who’s offering to actually hire you is a little daunting. That’s one of the many reasons you need representation.

Here’s the thing: Actors have skills. They create believable characters, they take direction well, they know how to deliver dialogue, and so on and so on. That’s why offers come in. And let me tell you something else: Every casting director claims poverty. I’ve never had someone say, “We have extra cash in our budget this week, so we can afford to pay your client anything you want.”

But trust me when I say that there’s always room to negotiate. It’s expected. And to be successful in that, I need the freedom to do my job. Sometimes, that means taking a hard stance.

What’s the worst that could happen? I hear you muttering, “I lose the offer!” Well, that’s not the way it works. I’m always given fair warning before we get to that point. After a lot of back and forth, the casting director, who I’ve likely known for years, will tell me they just can’t afford to give me more and it’s take it or leave it time. At that point, I’ve lost my shot at bettering the deal, but I haven’t lost the deal.

READ: What Actors Need to Know About Finances to Make a Living

Actors also get worried casting directors will get mad and never hire them again if we push for a bigger payday. I promise that holding out for more money will never burn a bridge. Want to know why? Because actors never catch the blame in these situations. I’m the bad guy. That’s my feature.

To be clear, this advice applies at every stage of your career. Just because you’re new to the game doesn’t mean you have to bend over and take what you’re given. Grow a backbone. Aim high. You can always settle if they say no.

So please don’t panic if I tell you we should ask for more money. I would never jeopardize the opportunity before you—if only because it would mean no commission for yours truly, and that is simply not an acceptable outcome!