How to Sing the Most Heartbreaking Song in ‘Dear Evan Hansen’ 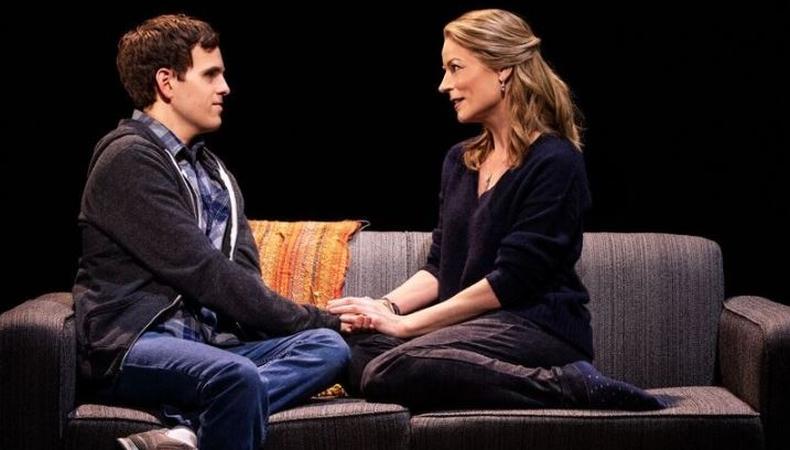 Tony-winning best musical “Dear Evan Hansen” continues breaking hearts on Broadway nightly, in no small part due to the act 2 tearjerker “So Big/So Small.” Sung to Evan by his mother Heidi, the tune is arguably the emotional climax of an entirely emotional show and for that reason, the temptation for the actor to self-serve looms.

But Lisa Brescia, who’s portrayed the single mother full-time since August (replacing Rachel Bay Jones, who won a Tony for the role), insists that making the moment about oneself is not only indulgent, it’s boring.

A few months into her run, Brescia shares how she ensures that song—and her performance overall—remains in service to the broader storytelling of the piece, and what actors should tell that inner critic every time it rears its head.

How did this role come about for you?
In the spring of 2017, the company reached out to my manager to ask if I might be interested in being a vacation cover for both of the moms. Being a professor in Missouri on a tenure track and knowing the show and loving it, I said, “Yeah!” I thought that would be great for me as an artist and it would be great for my trajectory in my tenure track. I made an audition tape with my husband over the course of six hours. It was a lot of material and we took our time in the lobby of the Pioneer Theater in Salt Lake City where I was doing “The Will Rogers Follies.” I sent it in and they said please come. I rehearsed both of the [roles] and played both of them twice. I just had no expectation of it going any further… But it was an audition of sorts [to play Heidi full-time].

What was the rehearsal process like?
Last summer was fast and furious. It was really learn-the-basics-of-what-you-need-to-know: the music, the lyrics, the blocking, the lines, the general mission of each scene in telling the overall story. For Heidi, the difference was I had four full weeks of rehearsal for just the one part, knowing I was heading into a long run of a year contract. There was plenty of time for exploration during the rehearsal process with the music team along with [director] Michael Greiff and the associate directors. I watched the show a ton, which was something they requested of me during my process, all the while encouraging me to keep what I like and leave the rest. I needed time to discover things on my own. The company was very open to me trying very different approaches and guiding me when I needed guidance and letting me take risks, fail, risk again, and discover her for myself.

Speaking to making the role singular, what was your process for finding your Heidi?
I try not to make it about me and instead make it about what the relationships are in the play and work off the other actor in the scene. It’s the basic fundamental acting technique and then trying to get out of my own way. The enemy [is] self-centered fear in the work: “How am I doing? What do people think? Am I good enough?” That’s boring and it doesn’t lead to anything good.

It’s not about me replacing, it’s not about me being back on Broadway. It’s about the story and if I can just concentrate on that, the ego can be set aside long enough to say, “I’m a really important part of this story but it is not about Lisa the [actor].” And that takes a lot of the pressure off. I think my work is so much freer and more spontaneous when I’m not thinking “How am I doing?” I can’t think of a more dull thing as an actor than that.

“Dear Evan Hansen” is so much about interpersonal connection; what’s it been like to forge bonds with the company off and onstage?
This is a funny cast. There’s a lot of sweetness and light backstage and then when we’re onstage—it’s not unusual but it’s extremely refreshing to have every moment onstage be treated so delicately and seriously by my colleagues. There’s no room for shenanigans. It doesn’t even occur to us and that’s really lovely. And they have been open to my take on things. The one emotional connecting relationship for Heidi is Evan, and connecting with Taylor Trensch [who plays Evan], I just feel like every single performance we get closer. Watching him is like watching a masterclass in Meisner Technique. He is so present and focused and I feel like we’ve built a history together through performing each night. It’s really easy because he makes it easy.

Let’s talk about that song. How did you find your way into “So Big/So Small”?
I do a lot of autobiographical work about the given circumstances of the play. I explored on my own, “What was that day like when my ex-husband came with a U-Haul truck and packed up his things? And what exactly happened with Evan when he came outside?” Once that work is done, the function of the song is to comfort Evan. He’s said, “I don’t ever think I’ll get over this.” She’s saying, “I promise you, you will. And another thing, I’m not going anywhere.”

It’s not about me and my pain. If I made it about me having an emotional experience in front of an audience, that’s just indulgent and not my job. It happens organically because I want so much to take care of him through the recollection of, “Boy that was a hard day and I felt so small.” If I make it about comforting him—which is my function in that scene—the writing takes care of me and the emotion is simply there as a function of what I’m doing, rather than trying to conjure up any sort of feeling.

Do you have any advice for future replacements?
Use whatever tools you can to quiet the inner critic and simply focus on doing the work that’s necessary. If you focus on doing the work, it’ll all unfold as it should. You’ve been hired for a reason, so just say to that inner critic, “Oh, hi, thanks for sharing. Take a hike.” And try to have a good time! It’s called a play. Don’t get bogged down in what other people think and “Am I going to be as good as…” or, “Will the fans like me?” Try to focus on what you can control and letting the rest go, and then just have a great time. It is such a privilege to be able to do this work in one’s lifetime. Don’t let it pass without enjoying it.

Casey Mink
Casey Mink is the senior staff writer at Backstage. When she's not writing about television, film, or theater, she is definitely somewhere watching it.
END_OF_DOCUMENT_TOKEN_TO_BE_REPLACED