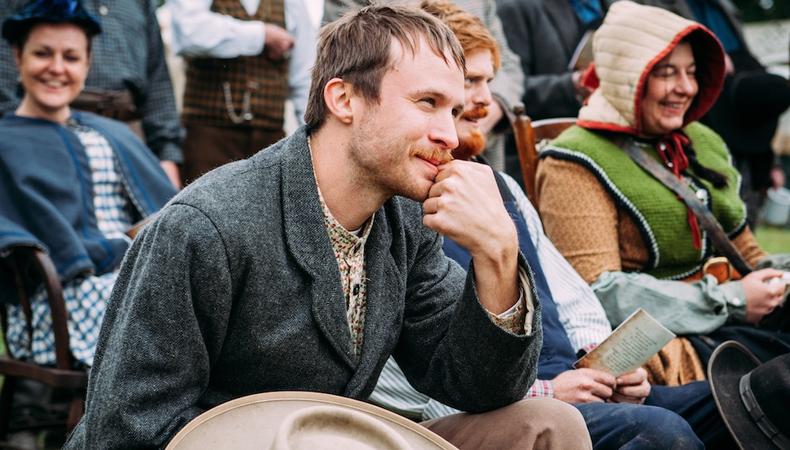 A lot of actors hate auditions. The room is “cold.” The reader doesn’t “give you anything.” It’s “not like being on set.” Admittedly, it’s superficial—the role exists in X world, yet the audition is usually in a small room in an office building with beige walls and gray carpeting. Here’s the thing, though: Auditions can be painful if you want them to be. Or they can be spontaneous, alive, and, dare I say, joyful, if you’re open to discovery.

Too often, auditions are marred by inauthenticity caused by an erroneous attempt to maintain control of the audition performance. Actors trying to get the audition “right” or play the scene the way they want it or the way they think it should be.

But imagine the casting director who watches dozens of actors trying to get the scene “right.” Do you picture that CD is enjoying him or herself? Of course not. The actor who wows is the one who surprises their audience without breaking the reality of the given circumstances. That’s the trick to a great audition.

In life, we’re immersed in our given circumstances and we move forward from who we are based on our needs and wants. Immersion in our world is sensory; we sense our given circumstances before we understand them—if we understand them. Sometimes we’re emotional, other times detached, sometimes we think through an encounter before it happens, other times we’re caught off guard by the events of life. In any case, we’re improvising. We’re always improvising. Life is improvised. Great acting seems the same—improvised.

Improvisation is more than ad-libbing dialogue and finding the “game” of a scene. At least it can be. Even in a highly structured multi-cam sitcom or on stage playing Shakespeare, surprise is the silver bullet. Every acting technique or method seeks to make well-prepared performances simultaneously surprising. We recognize this kind of behavior as the best acting; it seems primal, animalistic, alive.

READ: Everything You Should Know About Improv

The key to a surprising performance is constant discovery within the scene. Here are three improvisational tools that will propel you into a state of discovery and offer you a wealth of surprise.

1. Create the where. Every scene takes place somewhere. It’s almost always not a casting office. Most acting classes spend time dealing with the fourth wall, but that’s hardly immersive. Taking a moment to actively imagine the six (or more) walls of the room you’re scene takes place in will give you a chance at improvising truthfully from within the given circumstances. At your next audition go an extra step. Feel the temperature, see the colors, hear the soundscape, smell the smells. This can ground you in a way that frees and opens you up to a world of discovery.

2. Mirror the reader.
Auditions are different from movies and TV shows in that there’s no edit. They don’t cut away during your line for the reaction shots—the camera is always on you. That means your listening has to be as surprising as your speaking. Covertly reflecting the reader’s body positions, inflections and gestures will keep you in a state of discovery, create a visible connection and relationship to the other character in the scene (who won’t be visible on camera), and prevent nerves and self-consciousness.

3. Speak before you're ready.
Speaking before you’re ready will thrust you into a primal state, a hallmark of good acting. From this place of fight or flight, you’ll be engaged in a struggle from which no one will be able to look away.

Remember, actors are creative artists just like painters and poets. Our art is created right in front of people, so try not to “get it right.” Instead, discover something and surprise yourself.

Rob Adler
Rob Adler teaches you how to get out of your head and bring spontaneity, presence, and play to TV and film scripts so well prepared performances look improvised. He is an actor, director, teacher, founder of the AdlerImprov Studio in Hollywood, an on-camera coach, and a faculty member of the USC School of Dramatic Arts.
END_OF_DOCUMENT_TOKEN_TO_BE_REPLACED