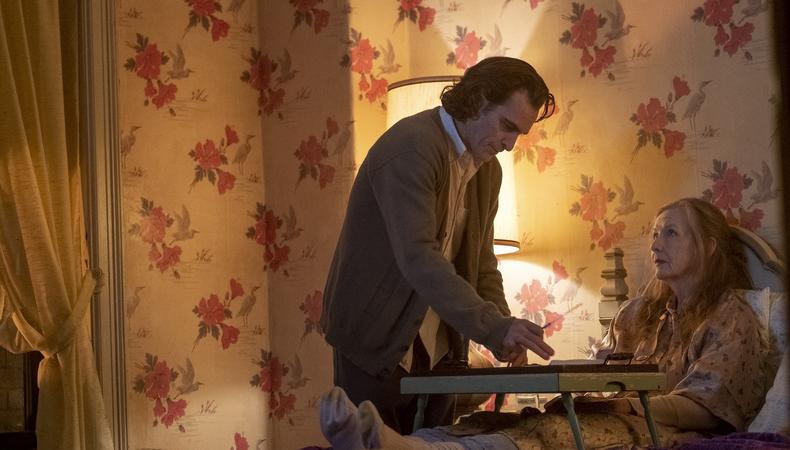 Production designer Mark Friedberg feels his job on film and television sets is focused on helping actors build a backstory outside of the project’s script—to create the “spaces that they’ve influenced or [have] influenced them.” In Todd Phillips’ “Joker,” he had a hand in constructing a Gotham and an iconic villain like we’ve never seen before.

How would you describe your responsibilities as a production designer, and in what ways does your work inform the actor’s work?
The production designer, at least as I see it, is responsible for the world that the cinematographer and the actor share, the world that we see. The psychic, cultural, sometimes social manifestation of the story; the world that this story is set in. That is a wide-ranging subject. Whether it’s a city, an era, a terrain, or time—or, specifically how it pertains to actors, residence, an office, a home, a product of who they are or the environment that influences us.

READ: How Production Designers Can Tell if You’re a ‘Great’ Actor

In some ways, we create a backstory, before the actors are even hired with the director, about what influences that person and who they are. What can we say about them visually? How do we add to who they are and how that character interacts with the story physically? And in what ways we can see—rather than see them do or hear them say—things about their past or their future?

Is there a specific dialogue you have with actors?
It depends. Often, an actor on a movie isn’t there until soon before they shoot. That’s usually if they’re famous. Once in a while, they are a part of the development of the project, and they want to have something to say about it. Or, in some cases, in a movie like “Pollock,” where the actor [Ed Harris] is the director. Or in the case of a movie where an actor has to do specific things, creation of art is an important one, one where I can actually speak a lot to them. And maybe it’s something that they’ve done a lot in their life, or maybe it’s something they’ve never done and they want to learn about from somebody like me who’s thought a lot about it.

A lot of times, the development of that character, or at least a part of that development, manifests itself in the process of designing that world. In other words, I may come on a movie six months before an actor does and work with the director and define the world that story takes place in and, on a lot of levels, the world that [character] comes from: their economic level, the neighborhood they come from. All the things that are affecting life, or are affected by life, in terms of place…. I think the process of cinema is one of continuous hand-offs. The novelist hands the book off to the writer, the writer hands it off to the director, who asks me to create a world that an actor inhabits, that a cinematographer chooses frames within, that an editor strings together, that a composer scores and gives an emotional shape, to sound design, to the way it’s marketed. It’s like a continuous chain, a giant relay race.

The holding of a character certainly manifests in the actor, but it’s not wholly the actor’s. It’s why it’s so cool and so collaborative, and it’s why I do cinema.

For “Joker” and its portrayal of the city of Gotham, how did you navigate reimagining something that audiences may feel like they already know?
It first starts with the script, for me. In this case, the script was written by the director, or at least he is one of the writers. So, his point of view is already in the script. One of Todd’s ideas was that this version of Gotham was the pre-’80s boom New York, or urban northeastern center, but not the iconic New York.

He was largely influenced by some of the cinema in New York, specifically [Martin] Scorsese’s “Taxi Driver” and “King of Comedy”—with “Taxi Driver,” the awfulness, the breakdown of the social contract. The awfulness of life for somebody challenged. Whether they’re emotionally, economically, [or] psychically challenged, it manifests in the place. The city, the hardness of that life has pitted person against person. The city has become uncompromising because everyone is fighting for the last scraps. The difference between the haves and the everybody elses has gotten so extreme that we’re all rats fighting in the gutter. In that situation, someone like Arthur Fleck, who’s emotionally challenged, who’s not normal, he becomes either a victim or, in this case, it somehow stirred up something in him. His ability to fight back brings out the worst in him.

Our version of Gotham was what groomed him. It was both an appreciation for how severe things got in the city, but also for the world of possibility that lived in the version of that city. That out of the rubble, things can grow. On top of all that, I think there are obvious shout-outs to the world we currently live in. How hard it’s getting, and how the line is getting thicker between the few people at the very top and everybody else. With distinction in the world that we see, between the world of Wayne, of Murray Franklin and the TV studio world, the Ivory Tower world, and then the world where Arthur lives, [the] urban, ethnic, poor part of the world that he lives in. Those places both affect who he is, and he affects those places after he sets it all on fire.

And those real-world connections are in part the reason why people are responding the way they are out of its festival run.
Page one says that the stakes are real. Even though it’s a comic book story, there’s an iconic character, and we are not trying to smooth the edges. We’re not trying to mythologize it. We’re trying to relate to it physically, viscerally, what it’s like to be on a messed-up subway or to be bullied by somebody, or to have to walk through garbage, or lose your job, or not be supported by social services, or all the things that happen. These are all things, in the case of Arthur, [where] we can relate to him. And what’s terrifying about the movie, is that we do relate to this guy.

He’s a sociopath. That, on some level, taken to its logical extreme, the decline of our societal compact leads us all to some version of madness. If you feel sympathetic to this guy who does bad things, what does that make you? It’s a curious question, and it’s an open-ended question, and it’s what’s risky about the film. So, that people are relating to it is cool. You don’t do something really good without risking something really bad.

Benjamin Lindsay
Benjamin Lindsay is managing editor at Backstage, where if you’re reading it in our magazine, he’s written or edited it first. He’s also producer and host of a number of our digital interview series, including our inaugural on-camera segment, Backstage Live.
END_OF_DOCUMENT_TOKEN_TO_BE_REPLACED