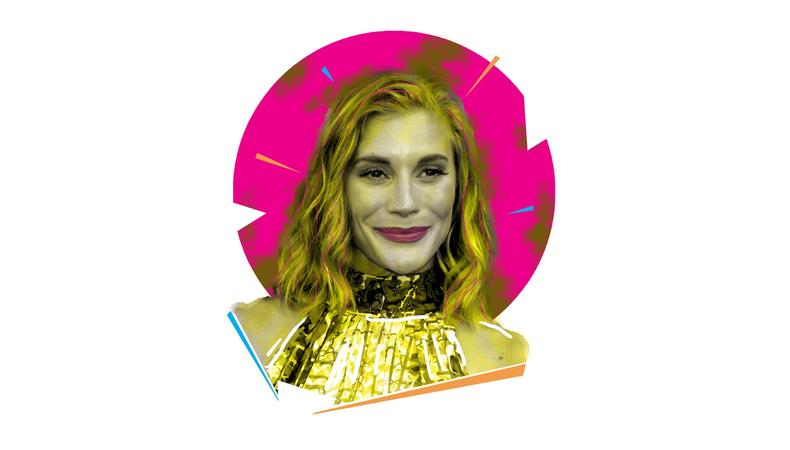 A masterful storyteller in the sci-fi and action world, “Another Life” star Katee Sackhoff (previously of “Battlestar Galactica” fame) is also an accomplished voice actor, with long-running gigs on “Star Wars: The Clone Wars,” “Robot Chicken,” and the “Call of Duty” video game franchise. We’re proud to recognize her this year with the Backstage Vanguard Award for Outstanding Achievement in Voice Acting. Here, Sackhoff shares her tips on how to get into character in voice acting and the early job that laid the groundwork for her entire career.

Learn how to get started in voiceover here!

How does it feel to be recognized for your work in voice acting?
I still feel like a little girl who moved here a couple of years ago with a couple hundred dollars in her pocket. It’s a beautiful reminder of how far you can come and almost not even realize the career that I’ve had in voiceover. It’s such a fun, relaxing thing to do voiceover work that it almost doesn’t feel like work, so I forget sometimes just how many shows I’ve been a part of!

What’s the biggest bit of advice you’d give to emerging voice actors?
Look at it just like a regular acting job. So many people say to me, “It must be great to show up in your pajamas!” But that’s not actually what it is. It’s an incredibly serious part of my career. I have the ability to work [in roles] that I never would’ve gotten in live action, like “Star Wars,” which I’ve been a fan of since I was a little kid. Take it just as seriously as your live-action auditions, but make sure you do your homework. Don’t just show up and put a voice on tape; do your homework and make sure you understand who the character is and what they want—and have fun. Voiceover is so much fun because you get the opportunity to play characters you’d never get to play. Some of the most iconic male or boy cartoon [characters] are played by women. What voiceover does is it puts everyone on an equal playing field. It’s the person who has the best understanding of the character and who manages to find something that’s individual and authentic in a voice who gets the role.

How do you approach voice work from a physical perspective?
I’m incredibly physical when I do voiceover work. I have been known to almost pass out from fight scenes, which, ironically, sound as much like a sex scene as a fight scene. I have to be wearing the shoes of my character—not the exact shoes, but a similar height. That allows me to get into physical character. Even for ADR work, it’s the same exact thing. If I showed up to do some ADR as Vic Moretti [on “Longmire”], who is a police officer, I had to take my shoes off in order to stand flat-footed, the way she feels. If I’m going to voiceover [her “Star Wars” character] Bo-Katan, I’m not going to wear a dress and heels. I need to feel like Bo-Katan, and I need to make sure I can move around. There’s a certain way that every character stands, whether they’re live action or animation. They all have a way of moving. For me, it’s really important to be able to stand the way the character does. I find it really hard sometimes. My character on “The Flash” is British and she wears 6-inch platform heels, and the first time I tried to do my ADR for her—which is so similar to voiceover—and find that accent, I couldn’t do it. So the next time I went in, I wore platform heels and I found her a lot faster. As soon as you stand like your character, and you, for lack of a better term, put yourself in their shoes, you find them faster.

What advice would you give your younger self?
I would continue to tell myself what I told myself then without any validity: not to give up. I constantly reminded myself that everyone gets one out of 50 auditions. So I would check them off on a board because I knew every job I didn’t get would get me closer to a job I was going to get. It’s the same advice, but now it comes with 25 years of experience—and it’s the truth.

How do you typically prepare for auditions?
I want to be 100 percent off-book. For me, that is 80 percent off-book, because I like to give about 20 percent to go with a bit of spontaneity. The most important thing about auditions is you have to be personable. People want to work with people they want to be around. There are so many things that go into getting a job that if you can look someone in the eye and smile and be warm and friendly, that gets you one step closer. I have seen so many people who are the best actors I know who don’t work. You have to take control of the things you have control over. Being personable is one of them.

What is your worst audition horror story?
One of the negative aspects of moving to Los Angeles and working right away, which was an amazing blessing, was that I never got good at auditioning because I didn’t do it a lot. Until this day, there are roles I knew were mine, [where] I had the best audition of my life and still didn’t get it. To me, those are the bigger horror stories of auditioning than if you go in and you don’t do a good job. If you went in and nailed it and everyone knows you nailed it and you didn’t get it, that’s the hardest part. Being a producer now and producing the TV show I’m on right now [Netflix’s “Another Life”], I know the reasons people don’t get jobs. When you know why people don’t get jobs, you realize it’s not personal anymore. It has nothing to do, sadly, with your ability as an actor. There are so many other things that come into play. That’s why it’s vitally important to control the things you can control. It is a business. It cannot be the thing that provides you with your self-worth. It can be the thing that provides you some joy in life, but it can’t be the thing you hang your hat on to validate you in life.

What’s the wildest thing you ever did to get a role?
Before I got the role in “Riddick,” on a stage at Comic-Con, I said I had it. There was a part of me that knew I had it. But I really didn’t. [Director] David Twohy tells this story [about how] he got this phone call: “Katee Sackhoff just said she got the role in ‘Riddick,’ ” and he said, “We haven’t cast her yet!” I just knew it was mine, so I started talking about it as if I had it.

How did you first get your SAG-AFTRA card?
When I was 16 years old, there was an audition to be Kirsten Dunst’s body double for a Lifetime movie in my hometown. I was a swimmer and I had just gotten hurt and my mom wanted to get me out of the house. She saw the ad in the paper and she took me down there, and I had the meeting and they said, “A body double has to be very similar to Kirsten and you’re four inches taller than her.” And so they said, “Can you act?” Of course, I lied through my little teeth, which is basically what acting is—so I went home with my mom and memorized that [role] and I got the job. I think I have a career because of this one moment. The director, Sam Pillsbury, believed in me, and he convinced my mom to bring me to California and introduced me to my agents and my manager. That one movie got me into the union; I didn’t realize how lucky I was until I saw people around me trying to get their SAG cards.

What performance should every actor see and why?
If anyone sees themselves as a woman going toward action or science fiction or they see themselves getting into genre work at all, watching Sigourney Weaver in the first “Alien”  is incredibly important. A lot of times, you see a strong woman written and so many people make the mistake of playing a one-dimensional strong character, completely forgetting the fact that nine times out of 10 of what makes a woman strong is her weaknesses and the things she’s had to fight for. We lose sight of that sometimes. I think any strong woman you can watch who brings a sense of vulnerability into the role is very important to study. That is something that is overlooked a lot of times when women play physically strong characters.