It all started by breaking the “bombshell” mold Hollywood had waiting for her: “I don’t want that life”

In 1979, a year after earning her very first onscreen credit on an episode of “Fantasy Island,” 21-year-old Michelle Pfeiffer was determined to never again play “The Bombshell.” That was, in fact, the name of her character on the short-lived ABC sitcom “Delta House,” a spinoff of “National Lampoon’s Animal House,” in which Pfeiffer was tasked with the role of the ditzy blond, the kind whose name you’d never even care to learn. Today, she remembers it as “really kind of a humiliating experience.” 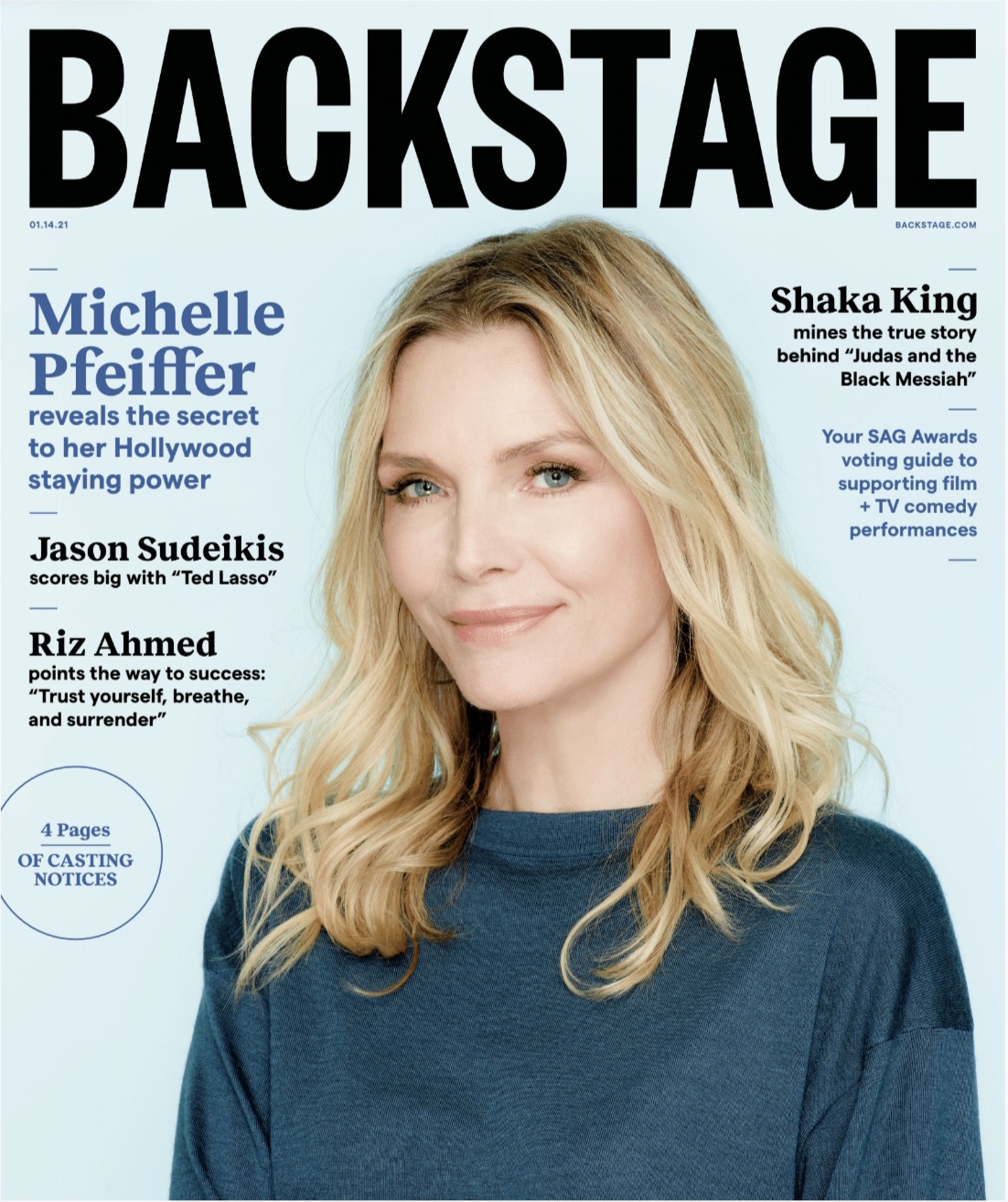 “It was a mixture, because it was a great break for me; I moved to L.A., and it was a regular income. And, at the same time, it was degrading,” she says. “I was surrounded by all of these very accomplished theater actors, and then there was ‘The Bombshell.’ I said to myself: I don’t want that career. I don’t want that life.”

True to form, Pfeiffer, now in her 60s and earning her best reviews in years as Frances Price in Azazel Jacobs’ “French Exit,” worked hard to build a career and a life that didn’t reduce her to just her looks. Which is not to say that the California-born actor’s good looks, much like Frances’, have been incidental in the decades since.

“In her youth, she had been renowned for her beauty and style,” Patrick deWitt writes of Frances in his 2018 novel of the same name, which he adapted for the screen. It’s a line that could very well refer to Pfeiffer herself, were it not followed by the admission that while these attributes were still in evidence, Frances had a “searching, malevolent flicker in her eye that marred her person.” 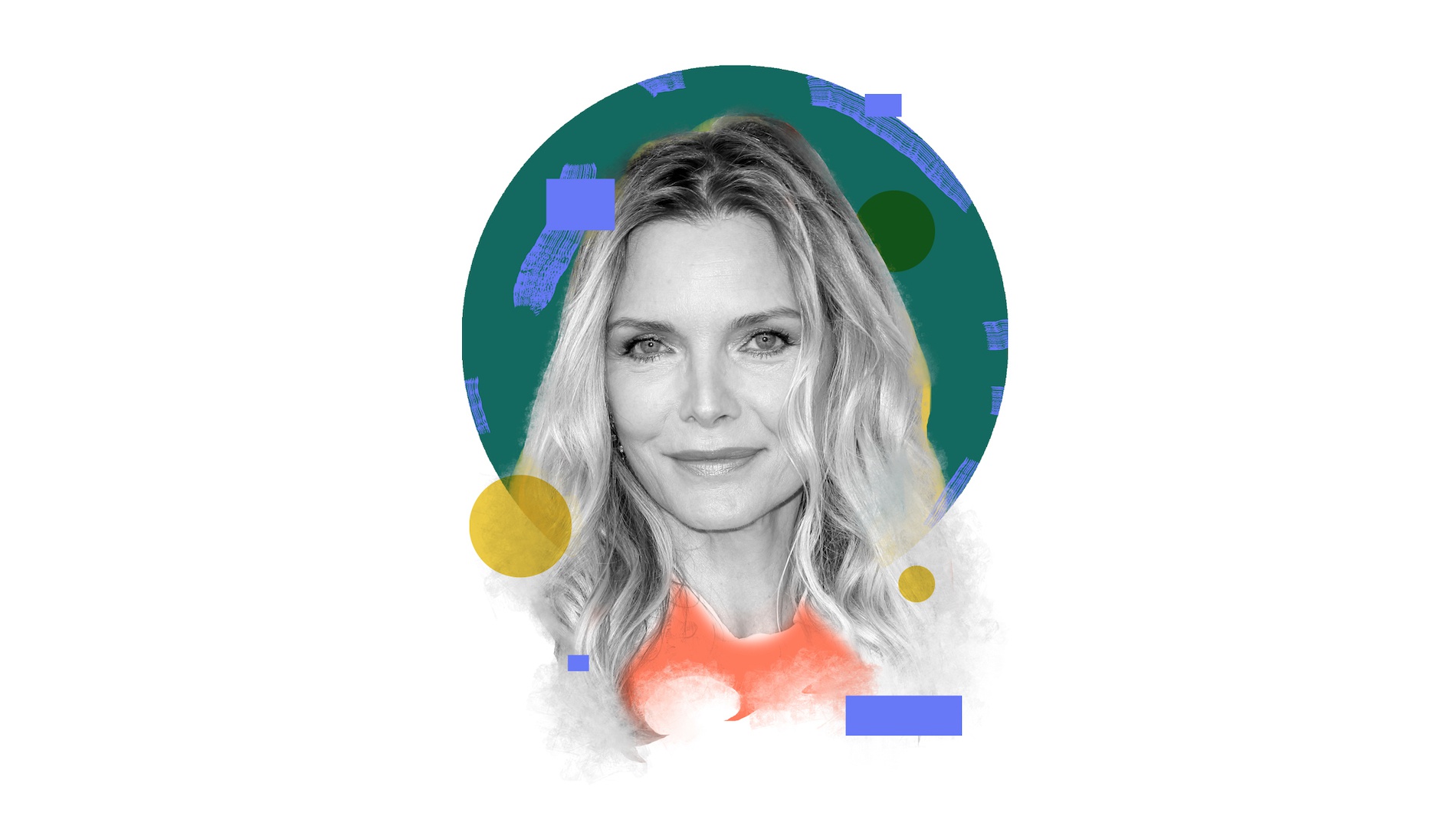 A moneyed widow who lives in infamy in New York society and flees to Paris, where she must contend with the impending loss of the wealth she hoped wouldn’t run out before her death, Frances is defiantly odd—“more than odd,” she threatens at one point. Like many of Pfeiffer’s most memorable characters, she uses her beauty as a kind of weapon, an armor she’s learned to deploy just as icily as her honeyed indifference and flippant condescension. In one hilarious sequence, she calmly sets fire to a centerpiece at a restaurant when a rude Parisian waiter opts to ignore her requests for the check; in another, she playfully banters with a homeless man in Central Park before coldly chastising an insufferable cop who approaches her to ask if she’s being bothered.

“I’ve never read anything like this script,” Pfeiffer says. “It was just delightful and odd and wicked and tragic. And somehow it has all these sort of disparate tones coming together, and it makes sense in a way that is breaking a lot of the rules. You can’t even really comprehend why it is that it works.” 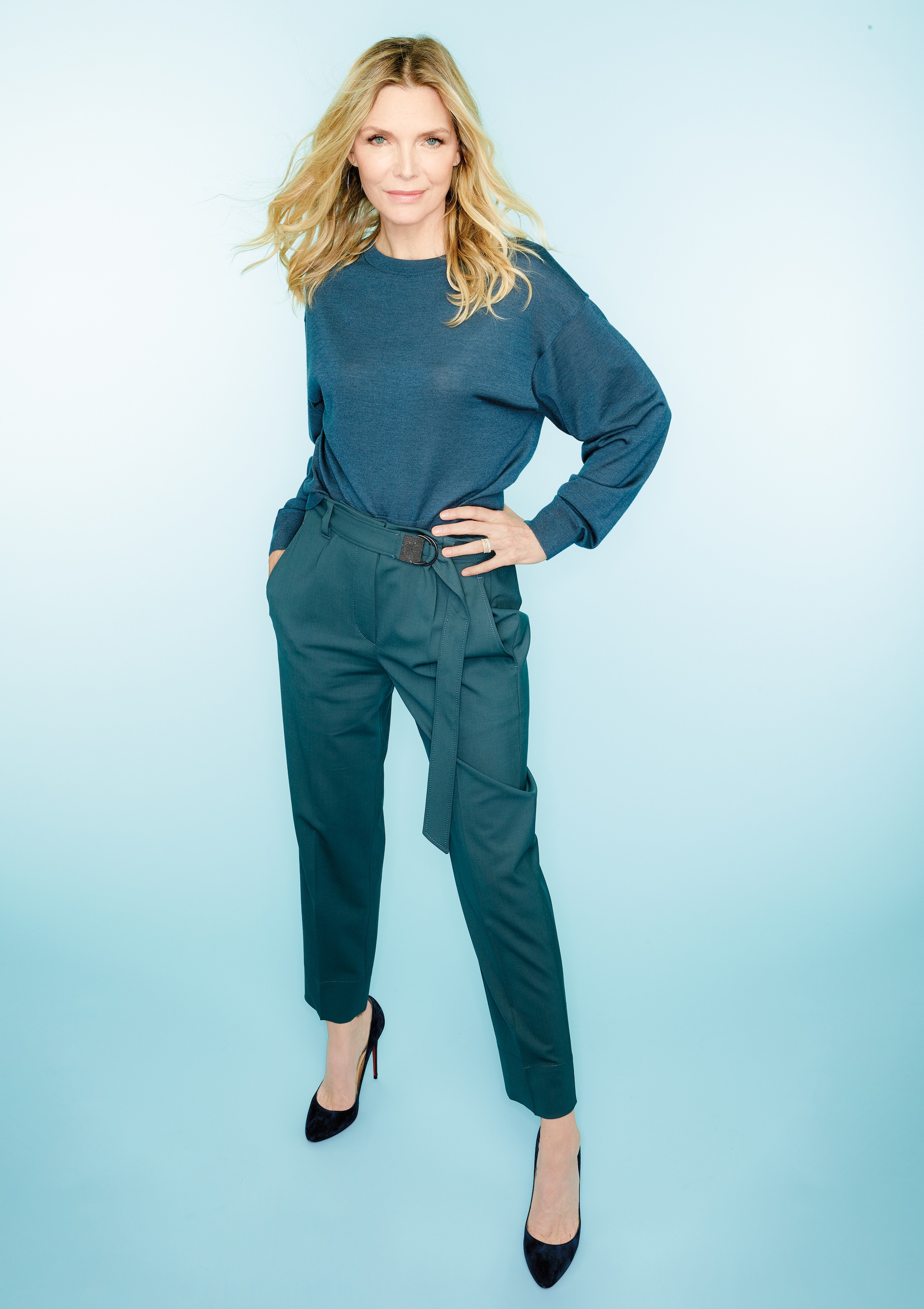 When Frances heads to Paris with her son Malcolm (Lucas Hedges) for her life’s third act (“Or the coda, if you’d rather,” she deadpans) she sets in motion a droll tragicomedy of errors that involves a cruise psychic, a lonely French socialite, a stoic P.I., and a black cat (voiced by Pulitzer Prize winner Tracy Letts) whom she knows to be the reincarnation of her late husband. It’s the kind of role that allowed Pfeiffer to truly let loose.

“I loved her take-no-prisoners attitude,” Pfeiffer says. “It’s just so refreshing to see characters like that, because we spend all of our time trying to be polite and not hurt people’s feelings, and along comes this person who is breaking all of those rules. And yet, there’s an underlying fragility about her.”

If it had been set and produced in a different time, “French Exit” may have suited one of Pfeiffer’s early childhood idols, those silver screen sirens whose striking features went hand in hand with their searing performances.

“When I was really small,” she remembers, “I would stay up very late at night and watch old black-and-white movies. You know, probably Bette Davis and Joan Crawford and all of those amazing actresses. I remember watching—and I don’t know where I got this—but I remember watching and thinking, I can do that. And then, of course, nothing came of that.”

It wasn’t until she was working as a checker at a supermarket that the epiphany of her chosen career came to her—this time with follow-through. “I was having a really bad day at work. I was not a very good checker; my cash register never balanced out right at the end of the day, no matter how hard I tried. And there was a customer going on and on about the price of their cantaloupes, and I remember, in frustration, kind of looking up to the heavens and saying, ‘OK, what is it in this life that you want to do?’ ” The answer was all too clear: Become an actor.

“The parts I get the most excited about playing are when I can visualize them immediately. When I hear their voice, the rhythm in which they speak, and their dialect. It’s almost like a lyrical thing.”

Pfeiffer confided this newfound revelation to just one person, who suggested she enter a beauty pageant. It took all of her self-restraint to not throw him out then and there. The pageant, the friend explained, would be the perfect way to meet an agent who often judged it. And that’s how former supermarket checker Michelle Marie Pfeiffer entered and won the Miss Orange County beauty pageant in 1978, signed with an agent, and began taking acting classes in a workshop in East Los Angeles. She finally felt at home.

By the time her next big role after “Delta House” came around, as the lead in 1982’s highly anticipated musical sequel “Grease 2,” Pfeiffer realized that not playing the bombshell wasn’t enough. Even before the film was released, she found herself yet again being scrutinized in ways that felt both inevitable and unsustainable.

“I was so uncomfortable with the way we were being presented to the public,” she says. “I remember there was this big ad, and it [read], ‘Too hot!’ And it was me and [co-star] Maxwell Caulfield together, you know? I just felt like, Oh, why are they shoving us down people’s throats like that, telling them that we’re hot? What if they don’t think we’re hot? I was so uncomfortable. And then I started to feel the pressure of having to live up to what I felt were unrealistic expectations.” 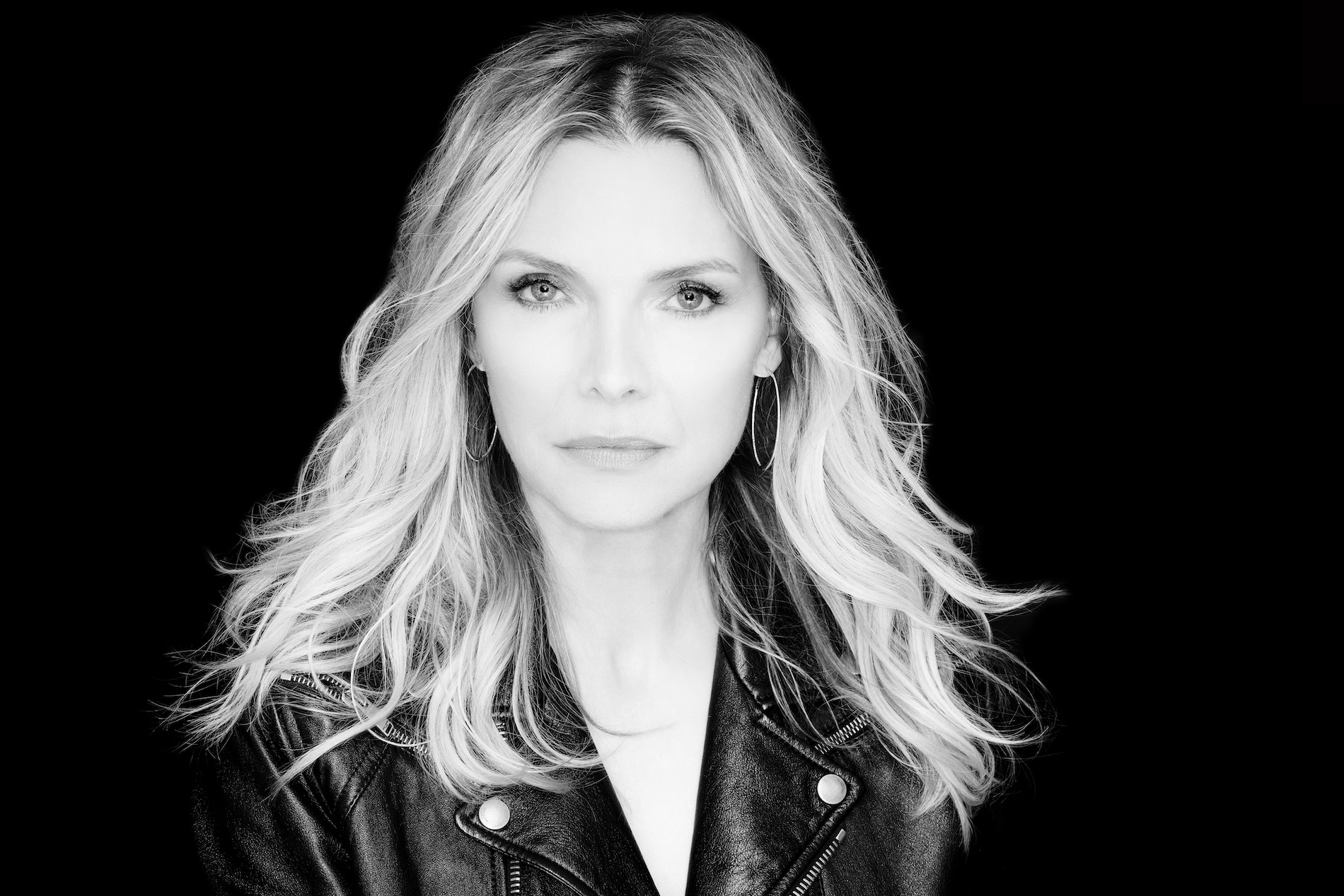 That experience pushed Pfeiffer to actively pursue parts that would help others see her as the character actor she aspired to become. She famously lobbied hard for the role of coke addict Elvira Hancock in Brian De Palma’s gritty gangster pic “Scarface.” The director was wary of casting an unknown and was only convinced she’d nail the part after an electric screen test that Pfeiffer still considers some of the best work of her early career. (It famously ended with a bloodied Al Pacino.) 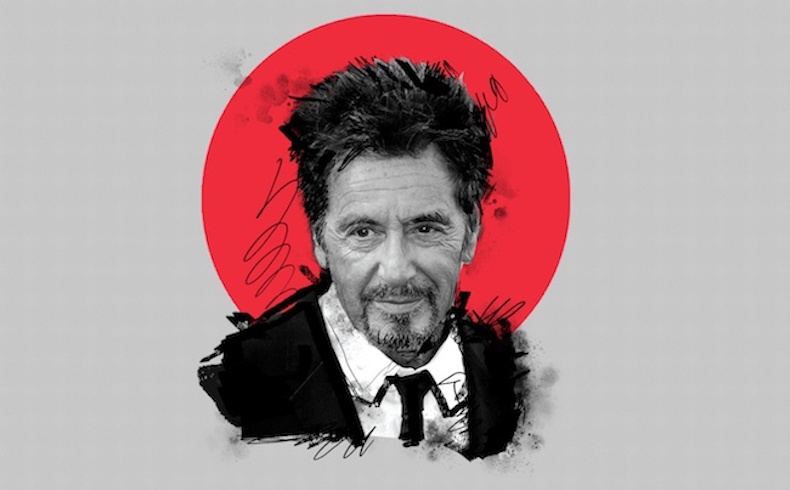 Al Pacino Remembers Getting His Start With Backstage

That concern with getting others to look beyond their own first impressions of her extends to how Pfeiffer has come to approach her work. Whether giving life to a chaste French noblewoman (in 1988’s “Dangerous Liaisons”), a troubled housewife (in 1992’s “Love Field”), or an imprisoned, conniving mother (in 2002’s “White Oleander”), Pfeiffer has long been perfecting the ability to embody women whose inner contradictions are both revealed and concealed by their very gestures. “I’m always just looking for the humanity in the part, and there’s always something below the surface that contradicts what is happening on the surface. I’m looking for what that is. What are we hiding in that scene?

“I had an acting coach who would say, ‘OK, what do you think’s going on with this character in this scene?’ ” she continues. “And you go, ‘Well, I think she ordered the pizza, and I think it’s cold, and I think she’s not really happy about it.’ And he’d go, ‘OK. Now, what do you really think is going on?’ I never forgot that. Inevitably, your first instinct is usually just a cerebral one, and you have to really stop and question that. Because usually what’s going on underneath has nothing to do with what you’re doing.”

“I’m always just looking for the humanity in the part, and there’s always something below the surface that contradicts what is happening on the surface. I’m always looking for what that is. What are we hiding in that scene?”

Walking that tightrope of conveying what’s not being expressed is central to her portrayal of Frances, whose pursed lips and stiff physicality (“It’s confident, and it also just has a very slight hint of drama; I think it’s a self-awareness that’s constant”) betray an uncontrollable inner turmoil that reveals itself in due time. Carefully attuned to deWitt’s droll comedic dialogue, Pfeiffer makes Frances’ breathy one-liners (“There’s a goodly part of me that wants to set this building on fire. What do you think of that?”) sound cutting and tragic in equal measure.

“The parts I get the most excited about playing are when I can visualize them immediately,” she says. “When I hear their voice, the rhythm in which they speak, and their dialect. It’s almost like a lyrical thing, like a musical thing. Frances was just such a challenging part, and something I had never come close to trying to unravel.” 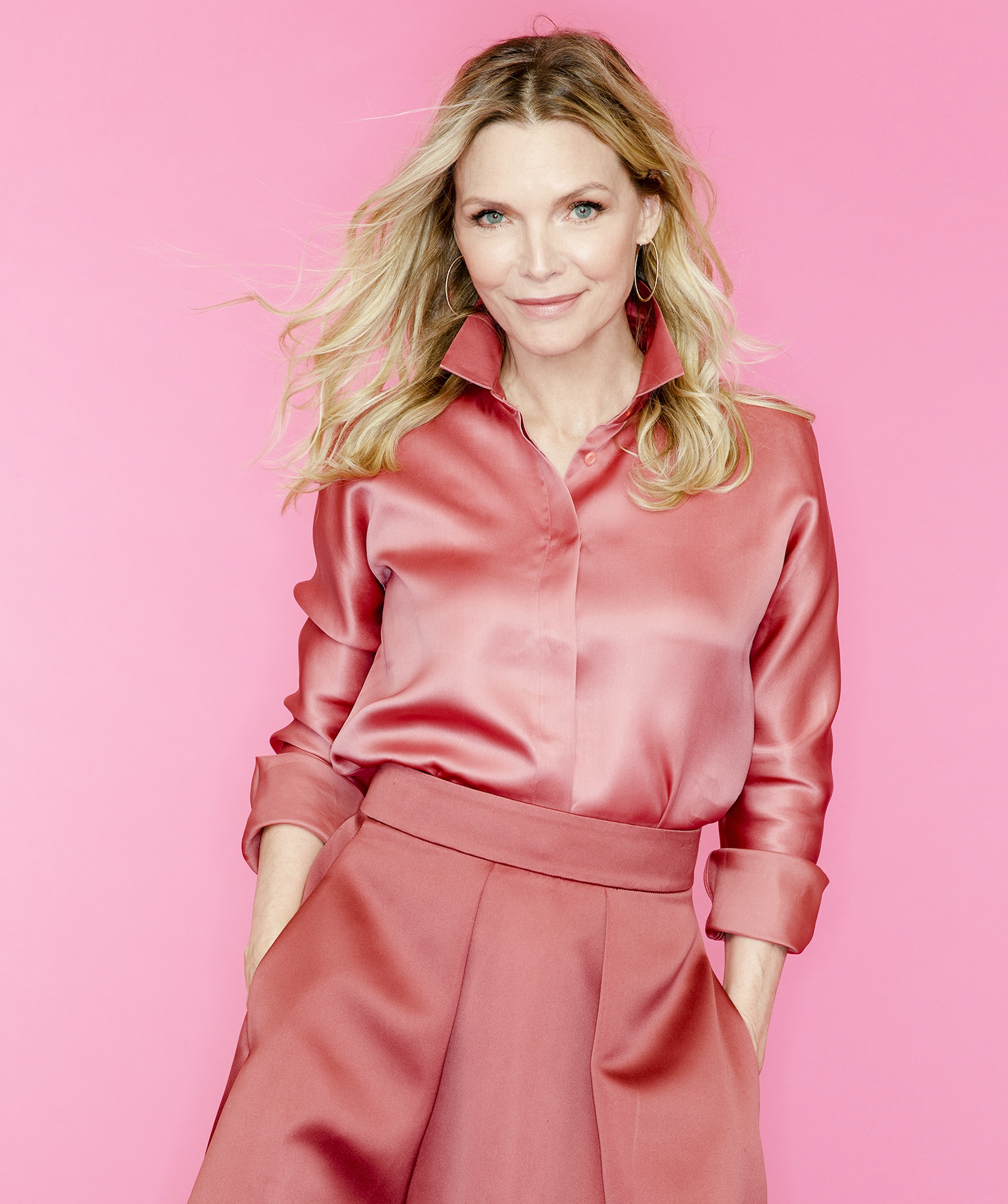 Despite her sterling roster of roles, which have nabbed her three Academy Award nominations, a Golden Globe Award, and a Silver Bear for best actress from the Berlin International Film Festival, among others, Pfeiffer confesses that she’s not one to revisit past work. It’s mostly a way to avoid being too self-critical.

“[That instinct has] mellowed in time,” she clarifies, “only because I watch myself less. I don’t look at dailies anymore, which has improved my life tremendously. And I really only watch the film once when it’s finished so I know what I’m talking about—and then I don’t see it again.”

She’s not so much priding herself on only looking forward as much as reassuring herself that it’s the only way to avoid being paralyzed by past missteps. There are, she admits, scenes—and entire performances—that still haunt her.

“Yeah, I don’t know why they stick in my memory. I mean, there are some performances I just would rather redo completely. I just feel like I missed the mark. Not that the work was bad, but the overall choice that I made for that character was wrong.”

Asked how such impasses can be overcome, considering how much of filmmaking depends on collaboration between actors and directors, Pfeiffer smiles. She knows, of course, that the ideal is to have an understanding with her director from the very beginning about who her character is and what world she’s inhabiting—finding that balance between an actor’s instincts and a director’s vision.