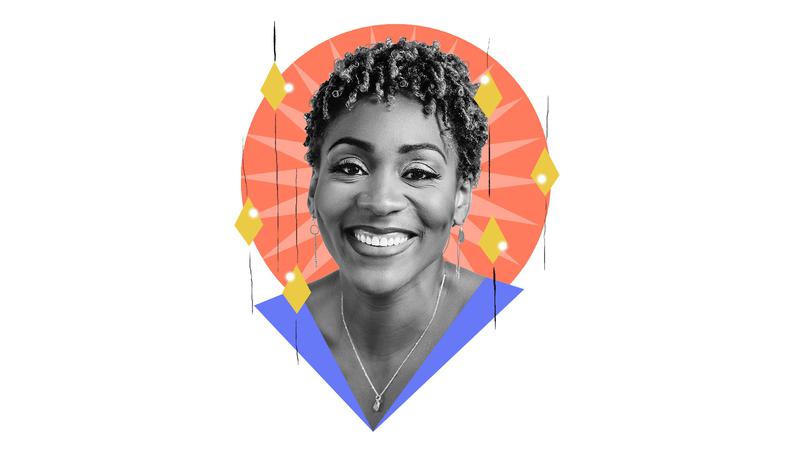 Without representation from an agent, actor (and award-winning director, writer, and producer) Mignon Von landed the leading role of Danni on Tyler Perry’s hit BET dramedy “Sistas” through self-submission. The show broke barriers this summer when it became the first production to film an entire season amid the COVID-19 pandemic. Now, going into Season 2, Von discusses how she got cast and more.

Tell me about filming during a pandemic. What was the quarantine process like?
Filming in quarantine was so fun because it was like camp, and all of my friends are there. It was also really challenging, too. [Perry] is so vigilant because when the country first locked down around April, he had a longtime crew member who had worked at [Tyler Perry Studios] pass away. So, for him, it was very personal to keep everyone safe. We would pretty much wear our masks up until he would call for action. We would stuff it in our pocket or stick it in a wardrobe purse. It was challenging in that regard; you’re moving quickly, and it’s the Georgia heat, and masks are hot. It was also really fun, because I roomed with Ebony [Obsidian], who plays Karen on the show.

Did this process affect how you approached the work?
We prepared a lot because we had the scripts for longer than usual. But again, because we are filming in a COVID environment, it definitely did affect the way we worked. It’s not the same when this person is wearing a mask and a face shield. The way it’s changed the work is really being more prepared. An actor’s always preparing, but it’s a different type of preparation. It brought me back to my improv days. Obviously, I have the lines and it’s not improvisation in that sense, but being prepared for anything. Being able to say, “Yes, and,” to things even though I have the lines already. But then when you get on set, it’s different. It’s not the same as rehearsal. Being more loose.

What was the pacing like? You filmed the whole season over the course of two weeks, right?
A little over two weeks, maybe. Honestly, it was actually faster last time. Last season, we did 25 episodes; this season, we did 22. [Season 2] felt faster because of the precautions. You can’t think about the pace. One thing I will tell you: I would recommend—if any actor is lucky enough to work with [Perry], I would recommend it. It’s the acting Olympics. What’s really great about it is it has to get you out of your head; you cannot think about the pacing. You’ve got to treat it like theater and go out there and do your thing. The pacing is fast, but you don’t feel it at the end of the day. It’s like being an athlete. In the moment, you don’t feel that muscle soreness when you’re lifting. It’s after.

You’re also a writer and director. What was the moment you decided you were going to pursue acting?
It was probably about 2018. My film had just won best director at the Women in Film and Television Atlanta showcase. I was like, You know what? I’m going to make it faster as an actor. There’s nothing fast about making it as an actor! But I just realized that with directing and writing and producing and acting in my stuff, starting out with no capital is going to be a slower burn. But if I can get myself a really good part and get my foot in the door, then I can shift back to storytelling. Making films [while] broke is incredibly uncomfortable. [Laughs] You’ve got to pay bills. If I can get myself a good gig, that’s one less thing I have to think about—a roof over my head, car payments. It takes some of that survival stuff that can crowd your brain and really put a cap on your creativity off of your heart. You can really move from joy and love and have your basic needs met. That’s why I think it’s so difficult for a lot of actors: For a long time, our basic needs aren’t met.

When did you feel like you got to a point that allowed you to put some of that survival mentality thinking out of your mind? Was there a big break?
I was living a very luxurious homeless lifestyle. I was couch surfing. They say once you finally face your fear, you find freedom in it. Because once you look at homelessness, once you look at having nothing and you realize: OK, I’m here, I’m alive, I’m fine, I’m breathing. I don’t know where my next meal is going to come from, but I’m not hungry right now. It’s not raining on my head. We run away from being broke. We run from it until it chases us. Finally, you let it catch you, and you’re all right. And there’s freedom in it. Once I faced that fear and I realized I’m still taken care of, I’m still supported by almighty God, there’s incredible freedom that came creatively and that came honestly with my faith. I was like, I can do anything because I faced this. I can walk into an audition room and be rejected. I’ll do my best, and if I get rejected, I get rejected, because the worst has happened. That’s where the breakthrough is. There’s a saying: On the other side of a breakdown is a breakthrough. You realize, I’m tough; I’m strong; I can get through anything. Hell, I can go into an audition room. The confidence of knowing I can get through anything is what helped get the part.

Do you have an audition horror story you could share?
Here in Atlanta, they opened up this wonderful theater a year or two ago [with] a great endowment. In the first year, they were doing “42nd Street,” “Hairspray,” [and] “South Pacific.” I was like, I am going to go and audition! Meanwhile, my voice hasn’t been trained in years, I haven’t taken dance classes in years. I go in there, and I’m going to sing “One Night Only” from “Dreamgirls,” [thinking,] No one is going to sing that song. The pianist, he went way faster than I anticipated, so they let me do it a second time. I was terrible. The looks on their faces could be memes, the way they looked at me with these wide eyes; their mouths were agape. A girl came in after me and belted “One Night Only”—the very next girl—and she was incredible.

1 Way You Should Never Approach a Producer, According to Tyler Perry

What’s the wildest thing you ever did to get a role?
The craziest thing I did was I did the two callbacks for “Sistas,” and I went back to L.A. and I packed up my stuff. And I moved [to Atlanta, where the show is filmed,] knowing they haven’t called and given me the part yet. And they eventually did. I did that three-day drive across the country and waited for the news out of sheer faith. This is mine; I know this is my part.

Thinking back on that time, what advice would you give your younger self? It’s a numbers game. Because I didn’t have representation, I would check all the platforms, [like] Backstage, multiple times a day. Because I cast my own short film, I know what the casting process is like. The quicker I can get my face in front of this person before the person with an agent or manager does, if I’m possibly right for it, I might get picked for an audition. Just play the odds. Don’t submit yourself every other day; don’t submit yourself once a week. Submit yourself multiple times a day.

How did you first get your SAG-AFTRA card? Danni on “Sistas”! I was not even SAG-eligible before this, but [Tyler Perry] is a really great guy; he doesn’t care about any of that.

What performance should every actor see and why?
There are several that I’d recommend, but Colin Firth in “The King’s Speech,” because that movie is about him having to give a speech, but we don’t really focus on the fact that the speech he’s giving is, “Hey, we’re about to go to war.” The way the story is set up and the way his performance is executed, his stutter is more urgent than the fact that a full country is about to go to war. That shows you how important storytelling is. When you understand stakes and nuance and urgency and a want and an objective, you understand insecurity and humanity. A stutter can be more urgent than a war.