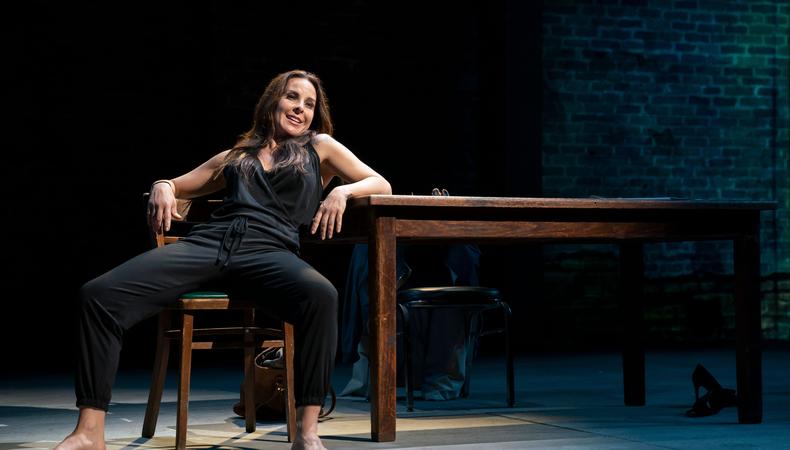 Isaac Gomez knows his plays aren’t easy to act in—nor easy to watch, for that matter. “They’re often centered on trauma, mostly mine,” he says with a laugh. That’s certainly true on both fronts of “the way she spoke,” Gomez’s New York playwriting debut, running through Aug. 18 at the Minetta Lane Theatre. Starring well-known Mexican actor Kate de Castillo, the one-woman tour de force focuses on the missing and murdered women of Juarez, Mexico, frequently (and devastatingly) referred to as a “femicide.” Gomez speaks with Backstage about the scrupulous research he did to construct the play—which Audible will additionally release as an audio play this fall—and the unmatched merit of actors willing to deep-dive.

Why did you feel compelled to write “the way she spoke”?
I’m originally from the border. I grew up on the American side, in El Paso. We would visit [Juarez] often, but once the violence started increasing, around the time I was in middle school, my family stopped crossing the border. It wasn’t until I had left to go to college that I learned about the missing and murdered women there and it horrified me and embarrassed me that everybody knew about it but me. It was sort of the first time I was confronted with, What [does] it mean to be a man growing up in this area? Because every woman in my family had known about it since they were kids. It was this very intense reckoning moment for me of needing to go back to Juarez as an adult to see it for myself. I went back to Juarez to interview women specifically whose daughters are still missing, bus drivers, everyone you saw in the play, and had written, initially, “La Ruta,” the sister play of this one that premiered at Steppenwolf earlier this year; “the way she spoke” came out of writing that play.

Why did this need to be a one-person play?
In that writing, I was like, “Oh shit, well this feels like it’s its own show because they’re individual testimonies,” but, as a man, I’m like, Should I be performing this? So then I go, “OK, well, what if it’s a woman?” And then, all of a sudden, it goes down this rabbit hole of, What does it mean for me to choose not to participate, to make someone else do it, the cost that that has on that particular person and the sort of passive inquiry of a playwright.

And why was Kate the right actor for this (hefty) job?
It was really important to me that this actor not only be Latina but she be Mexican. An experience I often have—and I know I’m not the only one—is casting directors and producers often sort of approach casting from a “pan-Latina lens,” when in reality, the cultural differences between Mexicans and Puerto Ricans and Columbians and Cubans and Dominicans are so varied that the only actor who could really tackle that level of specificity is the person who has lived it. Kate del Castillo isn’t just a Mexican-American actress, she’s a Mexican actress. She’s from Mexico, and is highly revered [for] her telenovela career, and has a long history of activism alongside her performance work. She’s very vocal about this, and in a lot of interviews she’s done, she’s spoken out against injustice and against government impunity, specifically in Mexico. It was important to me that the actor who was going to be embodying these women be someone who has that ability, who can take it on in that way.

READ: Jez Butterworth of ‘The Ferryman’ Isn’t Trying to Manipulate You—His Characters Are

More generally, what are some of the traits you look for in actors when casting your shows?
I am an actor’s writer. I’m so hungry to get actors in the room as early [in the process] as humanly possible. Even when it’s a first draft and it’s a total mess I’m like, “I need it. Let’s do it right now!” I can have a sense of it gutturally, and I can have a sense of the world theoretically, but when someone is embodying one track, they really do know it better than anyone else. Actors that I look for are actors who are really good in script analysis. These are actors who have really exercised their muscle in deep-diving into texts and to putting their sort of analytical lens on top of what’s happening. I’m invested in actors who are not afraid to take risks, so I’m a big “strong and wrong” person. I don’t care if the choices are “right” or not, because what does that even mean? We’re going to find out together. Just pick something, lean in, and then we’ll learn together if that’s not the right choice for this moment. And actors with rigor and passion; the plays I often write are not easy ones. It’s very important to me that my collaborators are willing to go into the trenches alongside me and it not be just a gig [to them]. I really value investment from the actor’s point of view.

Do you have any advice for the fledgling creative, looking to get their writing out there?
It’s such a common answer but it’s one that I think has so much truth to it, which is keep writing and surround yourself with a community who’s invested in you because of your work, not just because of what box you check. When I moved to Chicago, I was so hungry for a support group of playwrights who I could share my work with and who could give me feedback that wasn’t clouded by bias or by an Aristotelian or Western way of thinking, of play-making. I knew I could provide the same for other writers. So I started the first Latinx writers’ group in Chicago called El Semillero. We’ve been running since 2014 and we meet on average twice a month every month. We work on a new play over the course of 15—18 months, and then we present them as public readings, asking favors from our friends, from peers around the city, and then we invite everyone to them. That’s largely how I got my work out there, and I know that’s largely how so many of my friends did, too. That’s the best way because it’s under your terms, no one else’s. Don’t wait for anyone, because if you do, you might wait forever.