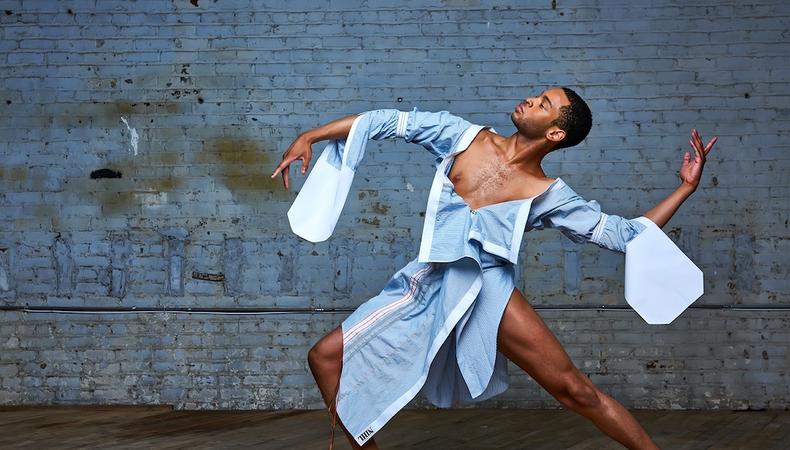 The following Notes From the Field essay was written by actor Ryan Jamaal Swain, who stars as Damon Richards on Ryan Murphy and FX’s “Pose.”

There are only a few times where I can say that I saw glimpses of the person I am and could be. Among them are the times my grandparents played Donny Hathaway’s “I Love You More Than You’ll Ever Know” or “For All We Know” and asked me to identify the instruments; I remember weeping because I never heard music like his. Another is my time at Howard University studying in the Department of Theatre Arts, along with my final showing at this theater training program in Oxfordshire, Oxford, where I literally felt my soul jump out of my being as I was presenting a scene from “The Cosmonaut’s Last Message to the Woman He Once Loved in the Former Soviet Union.” (Yeah, it’s a hell of a name.) The others I am in desperate pursuit of remembering, looking pensively into space asking, “When did I find the things that made me…me? Have I found them?” And then I look at the bigger picture and think about my time spent acting and dancing, and I realize just how fortunate I have been in that artistic pursuit.

With me being the first born in my family, my mom used me as her personal experiment, throwing me in any and every thing she could: art, dance, sports, you name it. I am thankful for that because unconsciously—or consciously—she was prepping me to become a citizen of the world and a more impassioned and empathetic person. (Thank you, Mommy). And when it came to those grueling, long hours at Beverly’s Dance Unlimited while a young performer, I didn’t know that I was in fact preparing for a starring role as Damon Richards on Ryan Murphy’s groundbreaking series, “Pose.”

Dance has always been my first love. The way that I express myself when talking—always accompanied with a bunch of gestures and body movements—is attributed to those hours at that barre, learning discipline and structure. It also, for so many African American bodies, is where we find nuance—nuance that is not readily taught to us through everyday life because of the hell-bent pressures that are put on black and brown bodies and the lack of representations on how to deal with those pressures.

In a world where society looks down upon mental health issues like depression, anxiety, eating disorders, psychological ailments, and so on, the sentiment is even worse in the black community. While it seems many white Americans are encouraged to develop their entire brains and feelings and minds with accessible mental health tools, it’s my experience that African Americans often practice a mindset of, “That’s a white person’s problem,” or, “Child, just sleep it off.” Such beliefs put some form of bandaging over the real issue at hand. Proper treatment, however, sharpens feelings and thoughts that would help a young actor or dancer be taught the necessary things that provide them with emotional intelligence—an intelligence that could help them reason with character, situation, and above all, woes in everyday life.

Psychological ailments like those listed above are a very crucial (and very normal) mental space to be in as a teen. I look at a films like “Hot Summer Nights” or “Eighth Grade” and weep at the brilliantly executed reality of what it means to be in that space. On the other hand, I am sad because I see that such a narrative is not taking place on a brown or black body when it very well could, seeing as those situations are familiar to black and brown folk, as well.

Symbolic annihilation takes place with the lack of this representation—a form of conditioning that says, “I don’t see myself represented in these narratives, thus those narratives and myself are not important.” When will that time come for entertainment to stop associating being a person of color with excessive amounts of trauma—that somewhere we are those normal American teens trying to get through the eighth grade or dealing with love and loss?

I know that for me, dancing and acting provided me the space to find specificity in what made Ryan Jamaal Swain who he is, and they continue to show me there are a lot of things that I have yet to learn.

For many other wayward black and brown dreamers, it has the power to save the soul of generations.