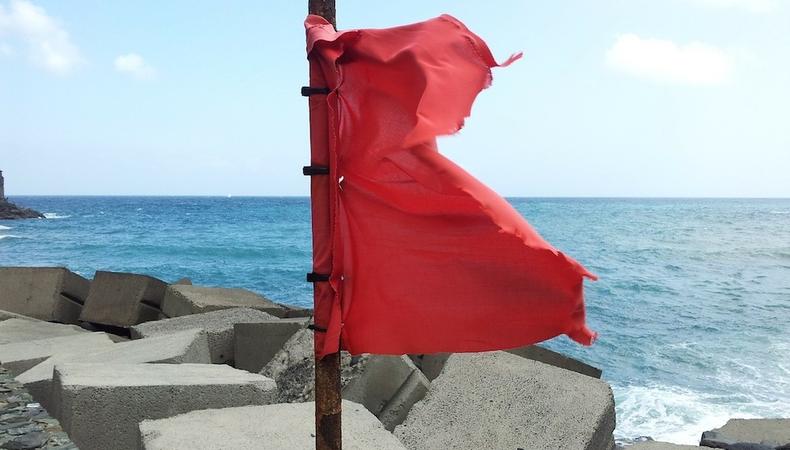 I encourage all actors to audit classes when shopping for a new teacher. It’s a lot like dating. When looking for a new acting teacher, you’re looking for a new partner (just not a romantic one). Few people in the dating scene strike gold right away—part of the reason for this, they’ll tell you, is because of all the freaks and egomaniacs out there. The same is true for acting teachers; there are just as many freaks and egomaniacs who make acting class their own personal springboard for feeling important or for not doing the hard work a teacher needs to do.

If you were sitting across from a first date who did any of the following things—described in chilling detail his/her childhood of sexual abuse, said “there’s plenty of room in my apartment for you to move in,” or asked you not to order the soup, simply because they don’t want to watch you eat it—you would run so far and so fast for your life (I hope).

Why? Because they’re red flags. And as experienced daters, you’ve learned to spot them quickly. It should be the same when you’re auditing acting classes.

Below are some common red flags that far too many actors miss during the auditing process.

Red Flag #1: The teacher never delivers any critique to students.

This is a common symptom of the “warm and fuzzy womb” class, a class which acts like a giant womb and feeds off students need to feel pleasant and snug when class is over. Acting class is now like acting camp, and the teacher is more like a camp counselor – s/he is more concerned about being liked and making people feel good than about real work occurring. Other times, the teacher doesn’t have the skills to address and fix what wasn’t working in the scene.

Why to avoid: It’s a gooey love fest with no work being accomplished, and thus, no room for growth to occur.

Red Flag #2: The teacher condescends to the actors and/or their work.

This is a common red flag for abuse-based classes, where the teacher isn’t really interested in teaching (not deep down) and is actually just using the actors as a way to feel better about her/himself. This is common when the teacher is a failed actor.

Red Flag #3: The teacher’s “technique” orbits mainly around expecting actors to dredge up past pain and trauma.

This is yet another common trait of abuse-based classes: it no longer becomes about acting, but about who can dredge up the most pain.

Red Flag #4: The teacher invites the class to critique another actor's work directly to that actor.

It was drilled into me from my early days at NYU that students should NEVER be allowed to directly critique other members of class after they presented work – that's the teacher’s job. A student can safely comment or make an observation as long as it’s directed at and to the teacher, not another student. Actors don’t directly critique (both positive and negative) other actors on a film set. Why would you do it in acting class? The reason you don’t directly offer critique to a fellow actor is the possibility your comment may shut them down to you when working.

Why to avoid: If the teacher is allowing this s/he doesn’t understand the damage such critiquing can do or s/he doesn’t care.

This is common in over-crowded scene-study classes where the celebrity teacher (Madame 0oh-la-la) likes to pack the actors in to the room’s capacity. The mentality is that Madame Ooh-la-la is so important, she won’t learn your name until you’ve proven yourself and your work worthy of her knowing your name.

Why to avoid: You’re paying off her mortgage with your monthly class fee. She should know your name.

Red Flag #6: The class is over-crowded.

This is of course related to Red Flag #5, and is so common that far too many actors miss it. An overcrowded class does not mean you’re getting a great teacher that helps push actors to the next levels of their ability. It usually means you’re getting a teacher who is too cheap or clueless to open up other sections of the class so that it’s not so damn crowded all the time.

Why to avoid: Overcrowded classes means everyone suffers and their ability to work is stunted.

Is it about them or you?!

Does the teacher make it about their Ooh La-La acting method or technique or do they make it about you? Is it your goal in class to please the teacher or for you to feel empowered in the scene and reach your “booked-role potential”?

The Best Of All Worlds: Ultimately, I believe every actor must be the creator of their own technique. A “good” teacher and class must value and reward the strength and uniqueness of an actor’s personality, not some doctrine. The teacher must be able to, in a supportive manner, address the elements that weren’t working in the scene and help the actor(s) find a fix during the working session––before the actor(s) sit back down.

I describe my classes as “Private Coaching in a Class Setting.” Classes are small enough for actors to coach one-on-one with me until they come through something and have a way of doing the piece that’s on the tips of their fingers, ready to bring into an audition or on-set the next day.

Joseph Pearlman
Joseph Pearlman is a celebrity and on-set acting coach for Hollywood’s top actors, musicians, and comedians. He works with clients such as Zooey Deschanel, Skylar Grey, Michael Welch, and Julian Sands, and he also coaches presenters for all the major award ceremonies. Pearlman Acting Academy was voted the best acting studio in Los Angeles by the Backstage Readers’ Choice Awards.
END_OF_DOCUMENT_TOKEN_TO_BE_REPLACED