A modern day icon in the world of comedy and entertainment, Ricky Gervais has had quite the cultural impact in his 20 years onscreen. To his name, he has seven BAFTAs, two Emmys, and a Golden Globe, also notably serving as  the host for the latter awards ceremony five separate times. The creative mind behind “Extras,” “Derek,” and of course “The Office,” Gervais can most recently be seen on his latest Netflix venture, “After Life.” As a writer, director, producer, and star for two seasons strong, Gervais knows firsthand the benefits—and endless challenges—to creating your own work. In this in-depth interview with Backstage as part of our ongoing digital series, The Slate, he discussed his creative process and how pushing the fear of others’ opinions out of the way is imperative to creating original work.

“Creativity, it flows,” Gervais says of his creative process. During self-isolation, he had to hone the craft of creating even more and he explains it includes “lots and lots of relaxation and thinking, opening your brain and letting ideas come.” He implores anyone else that is trying to write and be creative at this point in time to not just sit in front of your laptop for hours on end. “You've got to live, you've got to go for runs, you've gotta sit around doing nothing, you’ve gotta watch TV, you gotta chat, you've got to do lots and lots of normal things.” 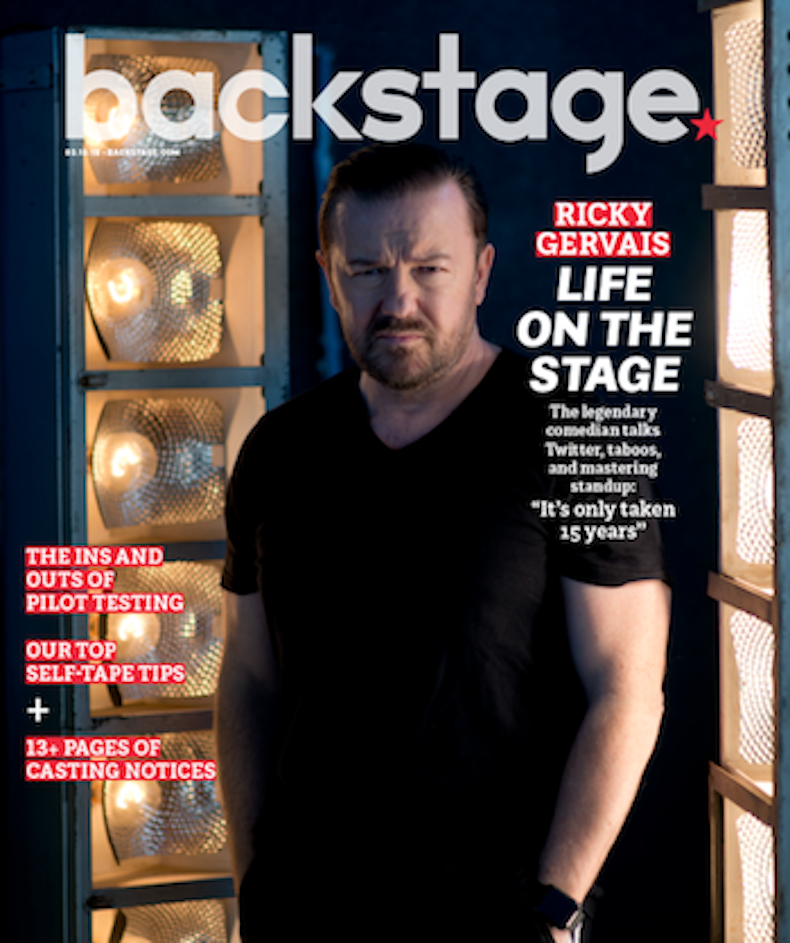 Gervais also discussed the common fear that creatives experience while putting themselves out on a limb for the world to see: “if you're excited about something and you haven't seen it before and you do it your way and it turns out like you wanted it and you had fun doing it, you can't fail.” When all is said and done, he says, ultimately “you’ve gotta trust your instincts because there's no one else to trust. You've got to do it for you and like-minded people.

“You've got to be a good self critic,” Gervais adds, speaking to the practice of directing himself on “After Life” (a position he also took on for “The Office,” “Extras,” “Derek,” and others). “As a British comedian, luckily I'm very aware of my own inadequacies.” Directing himself while starring on the series is actually preferable to Gervais. “Only because I don't have to ask anyone's permission.” Changing a line or controlling the pace of a scene are all things he finds easier to do on a project like “After Life” where he fully flexes all of the creative muscles. “If I was directing someone else's piece that I was in, I'd be more nervous and it would be harder, so I've made it an environment where it's just easy for everyone.”

Gervais wasn’t always a Hollywood player. With a background in music and radio, he didn’t break big on television until his late 30s with “The Office.” So while by his own accounts, he isn’t a typical actor, considering he’s never taken an acting lesson and now mainly performs in his own projects, he does advise actors to look to the world around them for inspiration and a sort of guerrilla training.

“I study real life, that's all. That was my training ground,” he says. As such, when he’s casting his own projects, he’s just looking for authenticity. “The deeper you go and the more honest you are and the braver you are, I think the better it is.” To him, confidence is key—and with it, he could get a performance out of anyone.

Watch the full interview below, and stay up to date with future interviews on The Slate right here.