Sasheer Zamata Got Her First Agent by Sticking to Improv 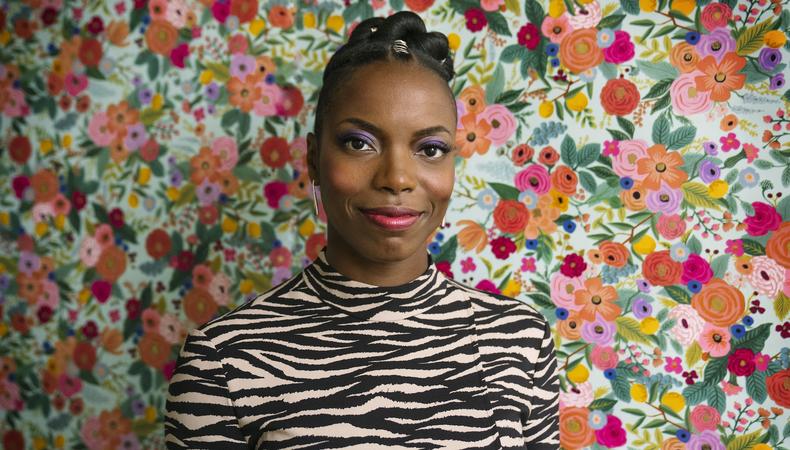 “Saturday Night Live” alum Sasheer Zamata is switching things up from her improv and sketch comedy past with writer-director Stella Meghie’s low-key rom-com “The Weekend.” For the first time, Zamata steps into the leading lady spotlight as Zadie, a cynical standup comedian who invites her ex-boyfriend and his new girlfriend to her mother’s bed-and-breakfast—only to stir up drama and find new love along the way. Zamata sat down with Backstage to discuss the new film, how she’s expanding her career past her comedy roots, and how anyone can successfully jump-start their acting dreams.

Comedic characters don’t always have to be the sidekick.
“It’s my first leading lady thing, and I like being able to play a character that’s showing a range of emotions and doing more than being the comedic relief. I think her being a comedian adds to her language and why she’s so quick-witted and sarcastic, but also she’s a person who has desires and needs and wants to fall in love. I think it’s cool to see that kind of character have that story.”

READ: Everything You Should Know About Improv

Want to be a good scene partner? Be a good listener.
“The best scene partner is definitely someone who listens. Tone Bell is in the movie. He plays my ex, and he is also a comedian, so it’s nice to be able to play with another comedian because we both like to improvise, and when you’re doing that with someone who knows how to do that, it’s very fun. Even if someone doesn’t know how to do it, if someone is listening, that’s the basis of improv and the basis of acting. If you’re with someone who is willing to go on this journey with you—as opposed to going on their own journey by themselves and you’re going on your own journey by yourself and your journeys are going in different directions—that doesn’t make for a great scene. You guys have to listen to each other and work on this thing together because you’re creating something together.”

Rejections are steppingstones along your way to success.
“Be comfortable knowing you’re going to get a lot of ‘noes’ for a while. Some people don’t. Everyone’s timeline is different. I got years of noes. I’m still getting noes! It will never end. But, as long as you look at [them] as an opportunity for something new as opposed to taking it personally, you’ll grow exponentially. Your time will come when it’s supposed to come. There are definitely times where I was like, ‘Oh, I should’ve got that thing,’ or, ‘I was way better than that other person for this role,’ or whatever the thing was. But then was like, ‘I would’ve been so unhappy if I had done that thing,’ or, ‘That clearly didn’t fit me’ once I actually saw the end result of the project. Or, like, ‘Thank god I didn’t get that job because it opened up more time for me to do this other thing that actually is what I should be doing right now.’ There’s always a reason for why things pan out.”

Power poses and poetry can help your nerves.
“Body language is a big thing for me. I saw a TED Talk on body language, and she was talking about a lot of poses. There’s the ‘superwoman pose,’ basically like a Beyoncé pose where you just put your hands on your hips. (Get a fan—have it around you constantly and bring it to auditions!) Something about it makes me automatically more open than a closed-off, insecure pose because [that] makes you more withdrawn; I don’t think it [puts] you in a position where you want to show off your talents. But [the superwoman pose] is an ‘I’m ready’ kind of pose. If I feel nervous or feel scared of some situation that I am in, I’ll try to force my body into positions where I am very chill and very comfortable. Also, I learned this sonnet in voice class in college, and I’ll recite it to myself for diction, but also because it kind of puts me in a nice headspace to be like, ‘I’m performing. I’m about to perform,’ or just, ‘This feels familiar.’ If I’m in a different town or something by myself and I just feel a little antsy, I do that sonnet and it kind of brings me back.”

You can begin your career with or without college.
“I did major in theater in college and started an improv group, so I feel like that gave me the confidence to do that out in the real world. But I don’t think it’s completely necessary. I think you can just grab any number of people and start a thing. That’s what I got from college. Our campus was very student-run, and if you saw a void in this system, you could fill it, so that’s why I started theater groups. I feel like that’s helped my career in many ways because I was like, ‘Oh, I see something that needs to be here—I need to start it.’ But that can happen without college, too. You can grab people, grab a camera, use your phone, you can make something and put it online. We’re in a very cool age where people can just put out content and it can be consumed. There are so many ways to have your stuff seen by people, and you don’t have to wait for someone to tell you to do that or teach you how to do that. There are also so many books and so many YouTube videos on anything. Like, if you want to know how to do anything at all, like how to write a screenplay or how to edit, you can google that and someone will tell you how to do it. You don’t have to pay hundreds of thousands of dollars to go to college if you don’t want to, or if you can’t because you don’t have those resources. The internet will tell you everything.”

You may change your career interests down the line, but that will only open new doors.
“After college, I knew I wanted to perform, but I didn’t know [in] what capacity, and so I moved to New York thinking I was going to be doing Broadway, and I was auditioning for plays and stuff—didn’t get anything. But then, I kept going to watch improv and then doing it, and was like, ‘This feels the best!’ It just felt so good, and I just kept following things that felt fun to me until I got to the point where I was like, ‘Oh! All the people I look up to in comedy did this. They all came from what I’m doing.’ And then the people who can give me jobs are the audience. I got my manager because he saw me onstage. I got my agent the same way. Doing the things that I love created a career for me.”

Zamata’s advice to her younger self?
“You can chill out a little bit. I worked a lot. I did so many things at the same time and now I’m so tired. The fatigue is catching up with me! So, I think I would have been like, ‘You know what? You can just focus on the things that really excite you as opposed to stretching yourself thin and doing all these things for other people.’ I would do shows or videos because I was like, ‘I’m supposed to be busy! Right? I’m supposed to take all the yeses!’ And sometimes, you’re supposed to say yes, of course; you’re supposed to say yes [to] all the opportunities. But also, ‘no’ is a really important word, and knowing when to take care of yourself and preserve your energy and just be picky with what you want and need in your career.”