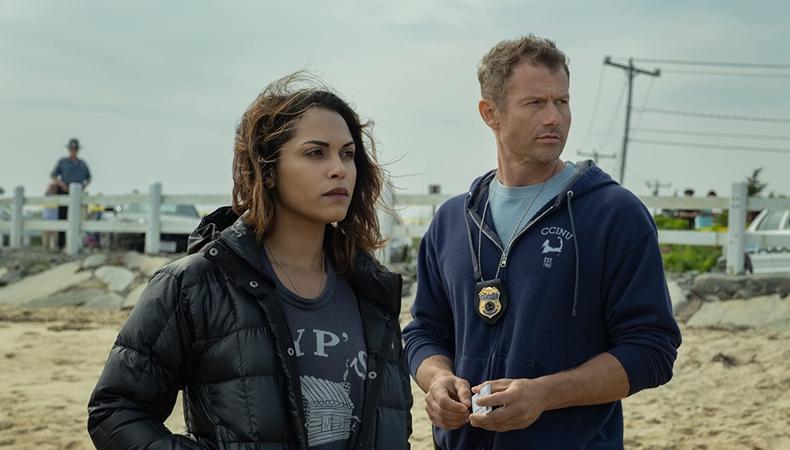 For Rebecca Cutter, the pursuit of her passion project was just the thing to take her from a showrunner’s assistant to a showrunner herself. The creator, writer, and showrunner of Starz’s newest crime drama, “Hightown,” which premiered May 17, Cutter traces her professional journey from assisting the showrunner on “The Mentalist,” a job she took to fund her indie film career, to writing “Gotham,” when she decided to follow the TV path. Those experiences gave her the ability to now lead the charge on a personal story years in the making. That story, which covers murder, drug epidemics, addiction, and, of course, a feminist, lesbian Latina agent, is the product of a cast and crew who ended feeling like family, a feat of which Cutter holds herself extremely proud.

So how exactly does a showrunner, whose initial ambition in the industry was to go indie, deliver primetime drama that achieves both entertainment and enlightenment? Simple: Recognize a medium where good stories can be told (even if it’s not the one you sought out) and assemble a team driven by collaboration, engagement, and the need to be unapologetically ballsy in their vision. Or as Cutter imparts, “Don’t chase the marketplace.”

How to become a showrunner.

What was the creation process like for “Hightown”?
When I was on “Gotham,” I had sort of fallen into it with Bruno [Heller, the show’s creator]. I started to feel like I hadn’t ever written a pilot, and I needed something that showed my voice that I could use as a sample if I wanted to go out for staffing season again. I really wanted to write something just for myself that I could be proud of, something very personal to me. And really, I set out writing it completely on my own without any idea that it would ever get on TV. I didn’t even pitch it to my agents or anything. I just wrote it, and then I gave it to them saying, “This will never make it on TV, but here’s the sample I wrote.” And they said, “Oh, no, we can sell this.” So that was eye opening. It was really my personal passion project that luckily other people thought of as commercial.

Why do you consider “Hightown” to be a personal story?
I grew up going to Provincetown and I always wanted to set something there. And I think even before I was sober, I always wrote these kinds of hot mess characters. I guess that’s who I relate to, and those are the people I like. I’ve also, unfortunately, known more than one person who has died from that disease. So I think it’s always been on my mind. Then I married a man from Cape Cod, so I got to see both sides of the Cape. I’d only ever been a tourist who’d seen a really iconic, happy vacation place. Going there in the winter and having family that lived there year-round, you get to see what happens when everybody leaves. Unemployment spikes, it’s completely isolated and cold, and a lot of the businesses close. So that was all the milieu around “Hightown.”

So what was the process of making that into a show?
I just got a vision of Jackie Quiñones. My father-in-law was a fisheries service agent in Cape Cod, so I had that as a cool job that we hadn’t seen before. But really, it was about this woman. This unapologetically sexual, ballsy woman who views herself as the mayor of P-town. She’s partying, she’s living her best life, she has her pick of the tourists. It seems like it’s all good, and she’s unaware about the fact that there is a level of self destruction in that. So how does a murder case bring all that to the forefront? How does sending this woman on a journey toward sobriety parallel with her going on this investigation? So this could have been an indie character drama about a woman getting sober, but it has this procedural back.

What it takes to be a successful film and TV writer.

Why is this story right for 2020?
I was actually surprised how many people said we still haven’t seen a show like this. Meanwhile, I started writing “Hightown” in 2015. I didn’t watch a ton of TV, but in the back of my mind, I must have known, Oh, a lesbian, Latinx lead is something unique, but I didn’t think it was unheard of. I’ve had so many questions about how this feels so new even now, and it’s very gratifying, but I didn’t set out asking, How can I create a character that we’ve never seen before? To me, I just knew that Jackie was a good, interesting character.

“I really wanted to write something just for myself that I could be proud of, something very personal to me. And really, I set out writing it completely on my own without any idea that it would ever get on TV.”

What about your experience on “The Mentalist” and “Gotham” prepared you for “Hightown”?
I learned a lot from my staffing jobs about the kind of boss I wanted to be and the environment I wanted to create. It’s a really different world running your own show than being on staff because when you’re on somebody else’s staff, your whole job is to align yourself with somebody else’s vision. And I don’t mean it in a negative way of being a cog in a wheel, but you have to subvert your ego and do somebody else’s show, whether you like the direction it’s going in or not. And then when you’re the showrunner, your entire job is to believe in your own vision and impart that to other people. So to me, it’s a very different skillset and I didn’t know until I got to “Hightown” whether I would be good at that. Luckily, I was, but the actual nuts and bolts of breaking story in a room, I absolutely attribute to having learned that while on “The Mentalist” and “Gotham.” That was the best TV school I could have asked for because I really learned how to keep an audience engaged and not lose them at a commercial break.

What did a day in the life look like while in production for “Hightown”?
When I was in the writer’s room, all I had to focus on was making the stories, managing the writers, writing the scripts, and rewriting the scripts. I could be 100% focused on that. And it was amazing to go into production with all these episodes and be able to scout all the locations at once. Also, it was a gift of time. Having time to look at all the scripts together and have hindsight to allow themes that were important. Understand how to plant things and pay them off in a way that you can’t do when you’re only one script ahead of the shooting schedule. So, to me, being in the writer’s room and being a writer, that is the most important part of my job. We shot in New York and Cape Cod, and I live in L.A. I view my job as part cheerleader, part making sure that the scene is getting what it needs for us to cut it together, part making sure the actors have a safe place and person to come to. I think that they were always so happy when I was there because they can talk story with me in a way they can’t with the director. 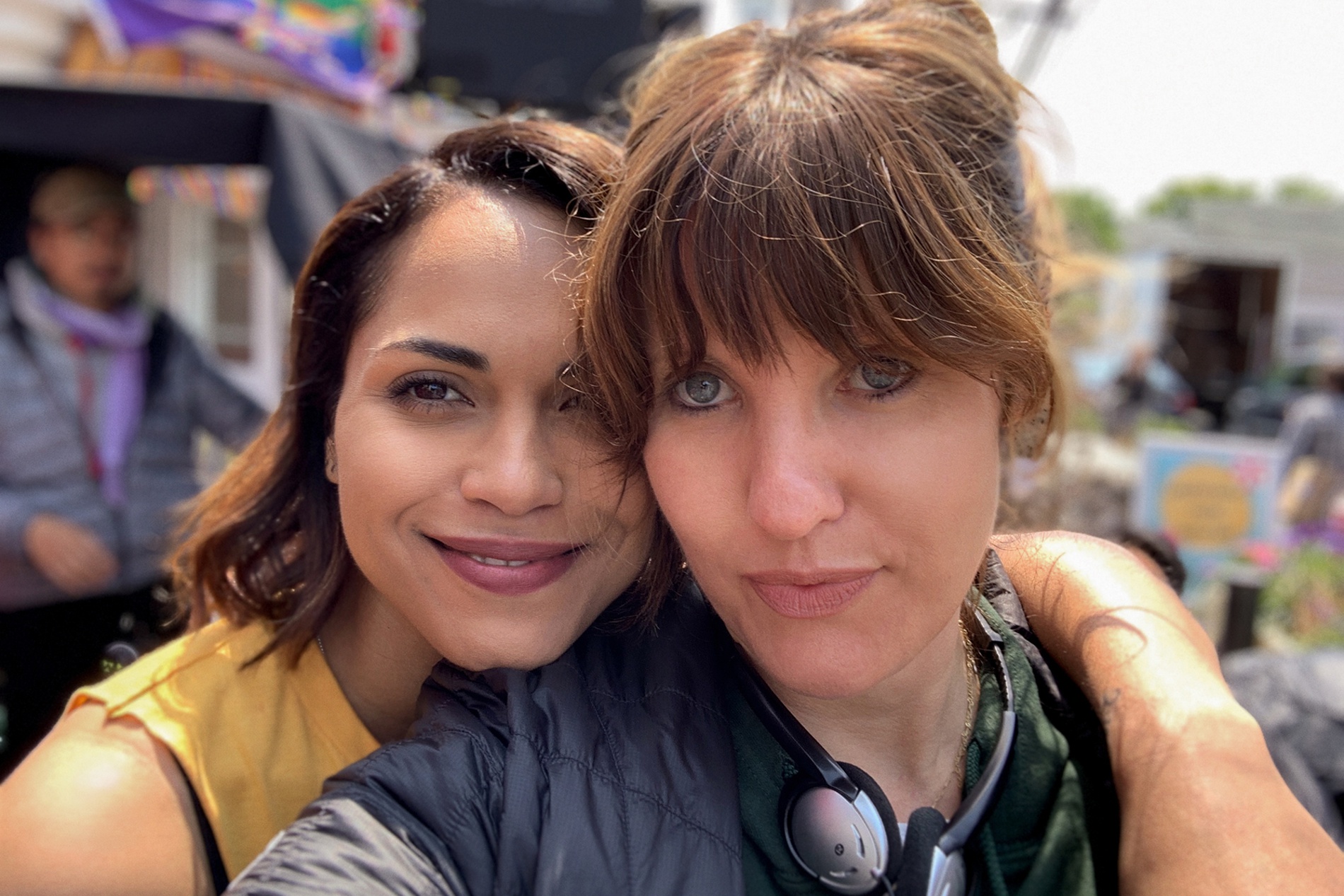 In your experience, what do you think makes a great showrunner?
I think somebody who has a strong vision for the show and knows what they want is very useful. And you have to be kind, right? I think people get very shut down by criticism and meanness, and I think those things are the opposite of fostering a creative environment. When people are scared, they’re not going to give you their best work. To me, it’s about being welcoming of ideas but being clear about what works and what doesn’t work so you don’t waste time. If there’s a way to do that kindly so that people aren’t scared to pitch the next thing that may or may not work, find that balance. The clear vision works all the way through because you have to be a little bit of an expert at every department. I might not be able to know which brand of jeans Jackie is wearing, but when I’m presented with three options, I can have an opinion. I might not know what lights to use, but I know what I want the show to look like and I can make a decision to make my vision carry through the whole process.

How to find a producer for your project.

What TV shows have inspired you?
“The Sopranos” and “The Wire” very much informed “Hightown.” “The Sopranos” was such a great mix of crime, plot, and character. And I love that it was funny, which is something I strived for in “Hightown.” Just because something’s about crime, it doesn’t have to be grim and pretentious. And “The Wire” for the storytelling and realism of it. But, you know, when I watched “Girls” for the first time, I though, Oh, TV isn’t what I thought it was. Oh, women can do a lot more on TV than I thought we could. I think the way Lena Dunham portrayed herself, and that she was so flawed, inspired me and I wanted to see more of that.

What’s some advice you would give to an aspiring showrunner?
This is always my advice to any writer: Don’t chase the marketplace. Write the thing that you are truly passionate about. Write that weird little personal story that you don’t think anybody else would be interested in. Now is the time for that in television. I mean, if what you’re passionate about is a big giant sci-fi epic, write that too. I don’t mean you have to write a small character story, but I think there’s no need to shy away from something because you think it’s unsellable or off the beaten path. There’s space for that. I think the more you have that personal connection and creating that strong character that you understand is invaluable because it just comes across on the screen. Make it as personal as you can, don’t be afraid, and don’t chase the marketplace.