Why Audiences Are Sobbing (Loudly) at Broadway’s ‘The Inheritance’ 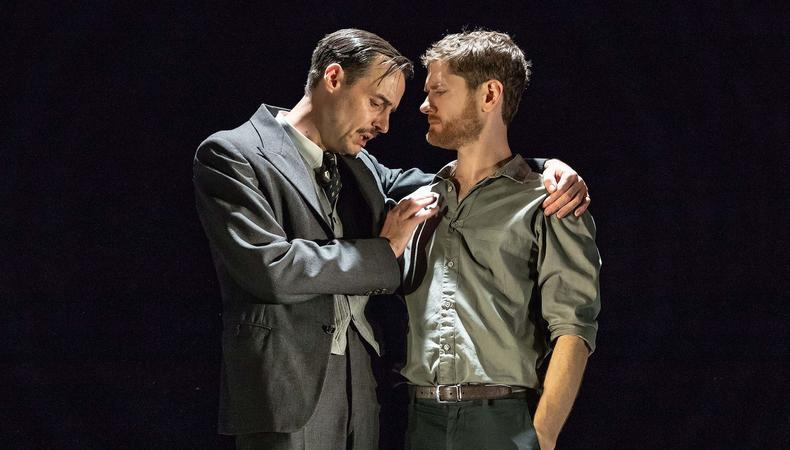 Much more than your typical straight play, sound factors heavily in Matthew Lopez’s “The Inheritance”—and that’s not just the audible sobs rumbling through the theater at every performance. Newly minted at Broadway’s Barrymore Theatre following a smash-hit West End run, the two-part Stephen Daldry–directed saga features an original composition by Paul Englishby, whose score aurally enwraps the audience and lets them know: It’s OK to cry. That, however, can be a double-edged sword for the actors onstage—here’s why.

When most people think of composing for the theater, they think musicals. But that’s not what you do. So: What do you do?
I do all sorts of stuff, not just theater. I do TV and films and ballet and contemporary dance, [but] I love to do plays, because you are a kind of support for the play without ever getting in the way. There’s a real kind of balance. You’re part of a creative team, and it’s not about the music as much as when you’re doing other things. Every play is different. I’ve done a lot of Shakespeare; I do a lot of contemporary plays. I’ve worked with Stephen Daldry [before], but this particular play had its own challenges, really, because it’s incredibly emotional. It’s also wickedly funny. And the stagecraft they’ve come up with to tell a story is really unique. It’s a privilege to be on it.

Can you speak further to the experience, specifically, of creating music for “The Inheritance”?
My job on this particular production is kind of to allow the audience to feel rather than instruct them, so the music puts an arm around the audience and says, “Come with me. It’s OK to feel. It’s OK to cry.” It’s a very subtle score, and sometimes it’s there to bring focus to something you want the audience to listen carefully to. It’s a big, epic six hours of theater, so you’re helping the narrative, supporting the emotion. [It’s about] generations of gay men, 100 years or so, and the music helps to frame it. Sometimes, you’re asked to help with momentum in plays, help drive things forward, but there’s none of that in this because the staging is so energetic. I was there for the emotion in this one, really, the heart of it.

As you said, this is an “epic” production. What was your jumping-off point for finding its epic sound?
I’m a pianist, and actually I don’t write very much piano music. But I did for this because, despite the fact that it’s epic and it’s sweeping through generations and contemporary American politics and all this stuff, I was more interested in the individuals’ souls, the intimacy of it. The play and the direction do the job, so I don’t need to create anything epic. It’s getting into the heart of it, really, and apart from a few places, it’s quite a subtle score, which was a challenge because I want to write lots of dramatic stuff. I was brought in quite late, when Stephen realized he wanted an original score opposed to bits of sourced music in there, found music. I came in when they were actually doing final run-throughs, which is unusual in the theater.

That is highly unusual in theater, to be brought in that late.
It honestly wasn’t going to have a full score, but then Stephen rang me and said, “What are you doing next week?” What that meant was I kind of made this score in the theater during the technical [rehearsals]. We had plenty of time and lots of previews, so I did a few sketches in my studio then brought a sort of portable rig into the theater and sat in the stalls. As we slowly went through the plays, putting the lighting and all the technical elements in, I’d be writing, and Stephen could say, “At this moment, we could use some music.” I love that sort of thing.

Music is so effective, particularly when it comes to actors’ performances. Can you speak to that symbiosis?
I’ve spoken to lots of actors during these processes, and often, an actor will tell you how much it helped them, just getting into the scene. Sometimes, you’re heralding people on with a cue or maybe a scene change and the music propels you into the next scene. That can really help an actor. [But] if you get that wrong, it can wrong-foot them. Also, there’s often a warning for actors not to play the music, because sometimes if you’ve got this emotional score, it can be playing the counterpoint to a different emotion that the actor’s trying to play. You don’t say, “Don’t play the music” [but rather,] “You carry on because the music’s not for you; it’s for the audience.”

So actors frequently have to “act” unaware of the music in theater?
Yeah, because it’s rhythmics. Sometimes—we had a case like this yesterday in rehearsals—the music’s playing and it’s describing a great sadness that isn’t onstage, and the scene onstage needs to be quite slappy and quick between the actors. The actors were slowing down because the music had this very slow rhythm. The director had to say, “No, no, no. Don’t play to the music.” So it can work both ways: Sometimes it can really help; sometimes you’ve got to counterpoint.

And that’s a major difference between stage and on-camera, because for film and television, the music is added after the fact. What else is different about composing for different mediums?
Technically, it’s different from my point of view, in the sense that [when] you have a lot of picture, you have a lot that needs music. But in the theater, there needs to be a different approach to accommodate the slight differences at every performance. It’s a real, technical challenge that I really like, which is kind of layering “stems,” which is sample tracks of the music. And then you can bring different stems in on line cues or action cues. You’ve got a long piece of music that goes right under a scene and needs to build at a certain point, needs to accentuate a certain line or come out at a certain point. It’s often made up of lots and lots of different cues but, hopefully, it sounds completely effortless!

Casey Mink
Casey Mink is the senior staff writer at Backstage. When she's not writing about television, film, or theater, she is definitely somewhere watching it.
END_OF_DOCUMENT_TOKEN_TO_BE_REPLACED