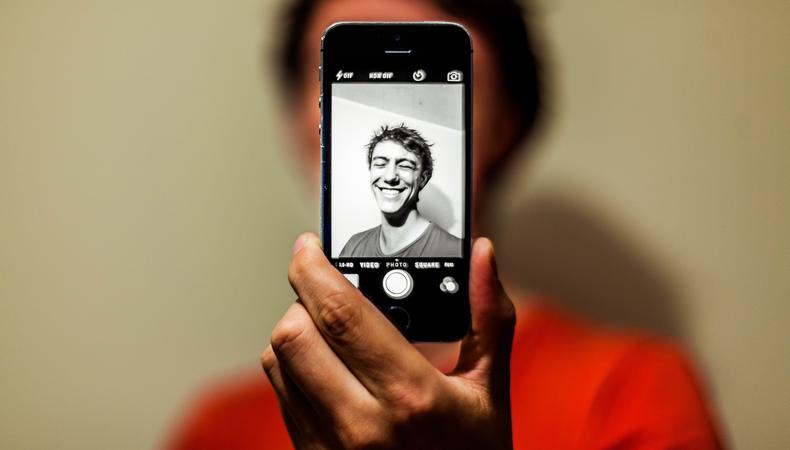 OK, actors, it’s time for an intervention on self-taping. It seems there are a lot of you out there who are sending in poor audition tapes. I’m talking out of focus, poorly lit, unprofessional, shaky, Blair Witch-style auditions.

I get it. You get the tape request at the last minute, panic, and need to make some quick decisions. What do you do when it’s 10:30 p.m. on a Monday and your agent emails you saying they need the tape by the next morning? You can either pay a lot of money to get it done professionally or you can simply take a deep breath, and do it at home using the tools you already have. I promise you, it’s not that complicated.

1. Use a smartphone or tablet like an iPhone or iPad.
We all have one of these and the HD quality is better than most camcorders. Prop it up on a book or buy a cheap tripod ($20 on Amazon) and an iPhone clip. You can email the file directly from the phone afterward instead of uploading to WeTransfer or Hightail. It couldn’t be easier.

2. Use a neutral backdrop.
A wall works best. Or buy an inexpensive gray or blue bed sheet and pin it on the wall. Keep it simple and clutter-free. Nobody needs to see your creepy doll collection in the background.

3. Find a quiet room.
Turn the TV off, silence your phone, tell your roommate to stop singing, and shut the windows. Nothing kills a self-tape more than car alarms and sirens.

4. No shadows.
Don’t use overhead lighting as it creates strong shadows under your eyes and chin. Use natural light or if your apartment is dark, buy a couple of cheap clip-on lights from your hardware store. Put the lights a little above eye level, on either side of the camera, and use daytime fluorescent bulbs (tungsten bulbs create a less appealing “candlelight” effect). It’s all about the eyes, so make sure they are clearly lit and in focus.

5. Get a good reader.
A bad reader or a loud reader can really ruin an audition tape. Make sure when they are reading they are quieter than you, as they will be right next to the camera and you want the voices to balance out. Also, make sure the reader doesn’t read the stage directions. You’d think that would be obvious. You’d be surprised.

6. Check the slate instructions.
Sometimes the casting director wants something very specific with the slate, like a full body shot or a tight close-up and profiles. Make sure you read the original email carefully. If the instructions are to send via YouTube or Vimeo, make sure it’s a private link. If you are uploading into iMovie, you can send directly to Vimeo or YouTube from that application.

7. Slate separately.
It’s always better to separate the slate and the scenes, and film as separate takes. It allows a break so you can really get into the character before rolling the camera for your first scene. The slate is directly into camera (name, age, role, agency, etc.) The scenes are to the reader sitting next to the camera. Also, don’t slate in character. It’s weird. This is the first time anyone sees you. Be cool, be natural—be someone they would want to work with.

8. Use a tight medium frame.
The frame should be from the chest up. Be still. Think it and feel it, and the camera will capture it. Save the flailing chicken acting for your “Guys and Dolls” audition. Don’t pan and don’t do any handheld “Law and Order” stuff. Lock the frame and keep it simple. Too much movement is distracting from the performance. The camera should be at eye level, not below, not above.

9. Sit or stand.
It’s a medium shot so it doesn’t matter, unless it affects your energy. Sometimes if you stand it gives you the scene more life, as a chair or sofa tends to zap the energy. Go with whatever feels right.

10. Eye lines.
Never look directly into the camera in a scene unless the stage directions specifically say so. Make the reader the main character in the scene and connect to that person. If there is another character, imagine someone standing directly on the other side of the camera.

11. Set a time limit.
Half-hour to an hour max. Don’t overthink it. Be as prepared as possible when you start taping (memorized, strong choices), so that you don’t waste time messing up lines. Do two or three takes of each scene, and pick only the best one to send (unless otherwise requested). We’re not doing a David Fincher movie.

12. Always watch it back before sending.
You never know if there will be a tech problem. Make sure it looks and sounds good, and is in focus. You want this to be as professional as possible.

13. Look your best.
Treat it like a real audition. Make yourself camera-ready (hair, makeup, outfit) and make sure you are well-rested.

Finally, just relax and have fun. The great thing about self-taping is you can do it until you get it right. If you have a bad taped audition, it reflects poorly on you and makes you look amateur. You want to be as professional as possible and show the people hiring you that you take your job seriously. If you follow these steps, your talent, not your poor tape quality, will stand out. Since most of us have this technology at our fingertips, learn how to make the best use of it and be prepared when that big opportunity comes along.

*This post was originally published on April 11, 2014. It has since been updated.

Matt Newton
Matt Newton is one of the most sought-after on-camera acting coaches in New York City. His clients include Tony winners, Emmy award winners, Golden Globe nominees, and well-known actors from film and TV.
END_OF_DOCUMENT_TOKEN_TO_BE_REPLACED