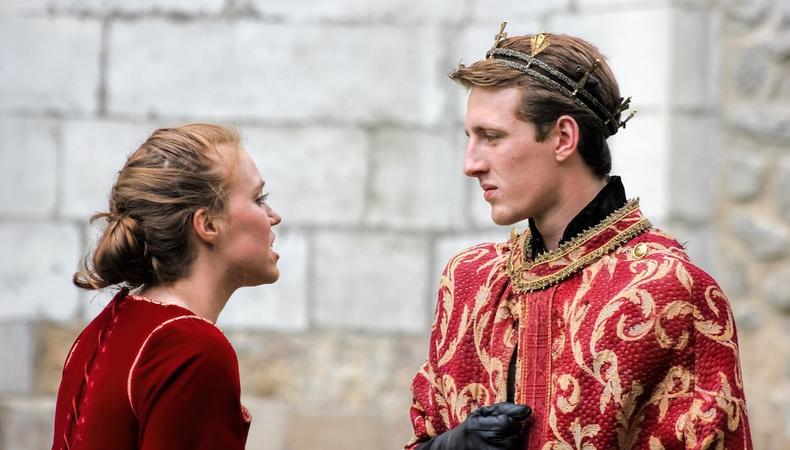 Many actors find Shakespeare (or any heightened classical text) intimidating. To truly understand the Bard in all his intricacies, it’s best to find a teacher who specializes in his work and study it closely. There are many rules of language, grammar, and character Shakespeare consistently employs, which I’ll expound upon below. He also breaks these rules all the time and when he does, it’s usually his way of telling you something about the character and situation.

Here are a few things to look for as well as a few tricks to get you through in a pinch.

The easiest way to differentiate between the two is to look at the physical structure of the lines as they’re printed on the page. In poetry, the line will not extend to the end of the page:

Good night, good night! Parting is such sweet sorrow,
That I shall say good night till it be morrow. (Romeo and Juliet Act II, Scene II)

In prose, the lines will continue to the end of the page and pick up immediately on the next line:

All the world’s a stage, and all the men and women merely players.
They have their exits and their entrances:
And one man in his time plays many parts. (As You Like It, Act 2, Scene 7)

Once you’ve determined whether your lines are poetry or prose, consider the circumstances of the play and the moment. What does the use of verse tell you about that moment and your character? Why is this moment better served in prose?

When it comes to poetry, there are two forms of verse: rhymed and blank (unrhymed). If the text is rhymed, your character should probably have a playful awareness of the rhymed words. And remember that unless the character is reading a letter, he or she is coming up with the ideas—and therefore the rhymes—in the moment. Poetry may also imply a heightened state of emotion, signifying love, passion, rage, humiliation, etc.

Whether rhymed or blank, iambic is the standard form of Shakespearean verse. In short, each line should scan to 10 syllables, broken up into five groups (iambs) that reflect a heartbeat, with the second beat being the stressed syllable: da DUM da DUM da DUM.

Before committing to the rhythm, quickly scan the line. If it scans more or fewer than 10 syllables, your character is probably in a heightened emotional state. If it does scan, say the line while tapping the iambic on your heart to help you find the heartbeat of the moment.

If MUsic BE the FOOD of LOVE, play ON,
Give ME exCESS of IT; that SURfeitING,
The APPeTITE may SICKen, AND so DIE. (Twelfth Night Act 1, scene 1)

Note that this is a helpful way to learn, but performing while strictly adhering to the rhythm may sound unnatural on stage.

As a general rule, in Shakespeare and in all texts, one thought equals one breath. Meaning you should follow the entire line through from beginning to full stop (period, question mark, exclamation point) without pause. This helps you, and the audience, follow your train of thought.

O, that this too too solid flesh would melt,
Thaw and resolve itself into a dew!

One breath should take you from “O” to “dew!” This is how one acts Shakespeare on the line. You must maintain the flow of thought and language. Just because the line breaks doesn’t mean your thought does as well.

A comma, colon, or semicolon isn’t ever a stop. A comma isn’t always a pause. For example, in the above line there’s no need to take a break between “melt” and “thaw.”

Conversely, in one of Hamlet’s most famous speeches, using the colon might be of use:

To be or not to be: that is the question.

The colon here is not a full stop, but consider what a pause or beat earns you. 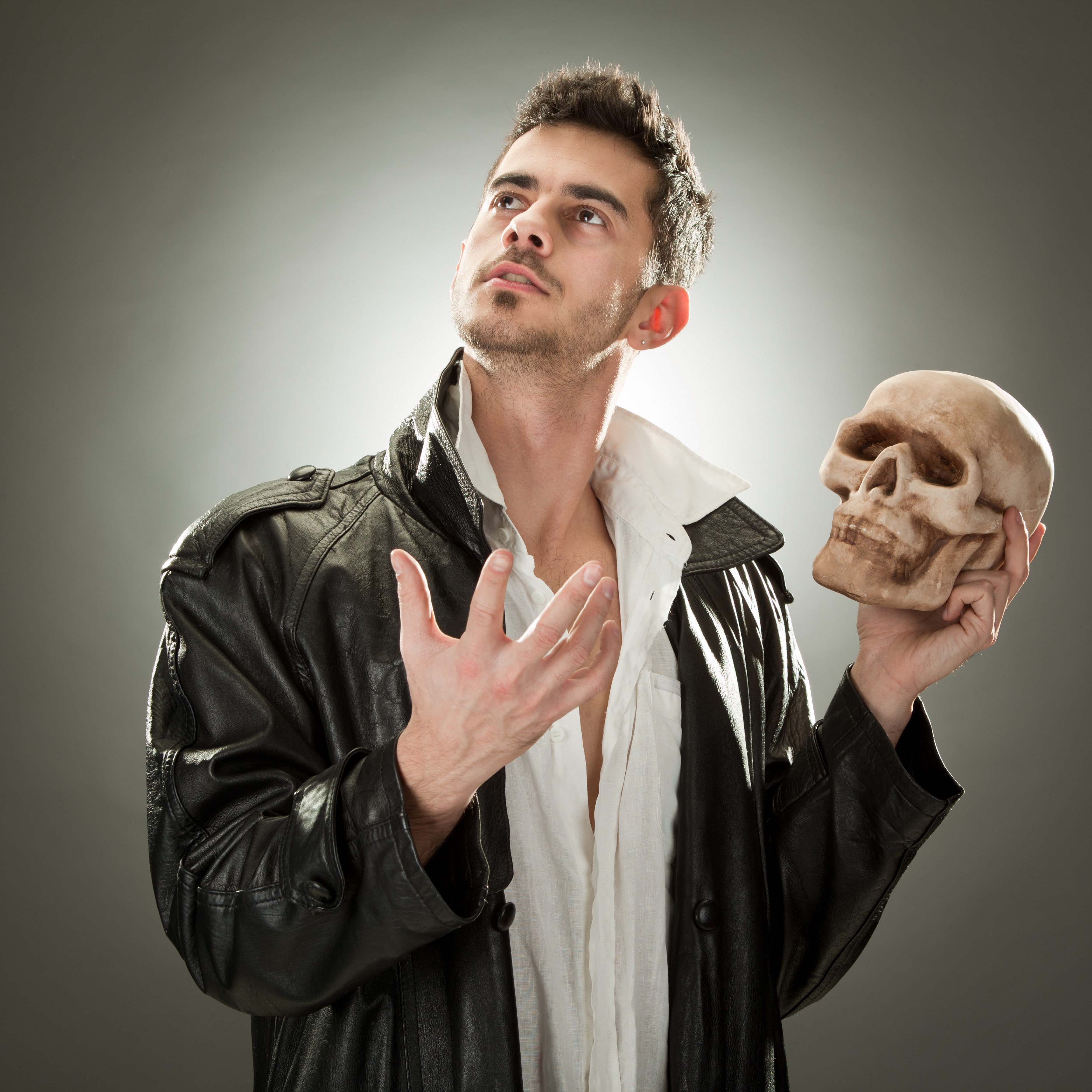 Acting Shakespeare on Film? An Acting Coach Tells You Where to Start

This is the repetition of consonants in adjacent or closely connected words. For example in the Friar’s opening prologue of Romeo and Juliet he says to the audience:

From forth the fatal loins of these two foes…

Note the repetition of “f” throughout that half of a line. It’s hard sound; a sound that has some bite. Shakespeare is telling you to take your time. It is impossible to speed through that line and land it at the same time.

This is the repetition of vowel sounds in adjacent or closely connected words. For example, Juliet says to Romeo:

My bounty is as boundless as the sea.

Notice the repetition of the “ou” sound. When you say it aloud, feel where it sits in your body.

This is a word that suggests or resembles the sound it describes, like tick, tock, bang, quack, bark. One of the most famous Shakespearean uses of this can be found in “Macbeth”:

Here we have a use of alliteration, assonance, and onomatopoeia.

Take Juliet’s line, “Romeo, Romeo, wherefore art thou Romeo?” It’s easy to assume that “wherefore” means “where are (you)?”, as if Juliet is calling Romeo to her side. But in actuality, she is asking “why?” Juliet is saying “Why are you Romeo, a Montague, instead of someone my family will let me love?”

Almost all of Shakespeare’s speeches and soliloquies have the same structure and movement:

All thought in Shakespeare is forward moving. One thought leads to another and builds upon the previous. Your character might pause or take a left turn, but follow the threads, the connections of the ideas. One thought, one breath will aid in this.

Shakespeare uses opposites all the time to make his point. Scour the text and find them. Sometimes it’s easily apparent, other times it’s not. But it’s these oppositions that help you make and focus your argument.

Once you’ve gone through the text and noted these uses of language, it’s time to get the words in your mouth. Shakespeare was, after all, meant to be spoken. You must speak these words, these sentences, these thoughts, on your breath—not in a whisper. Getting the language in you and out into the world will help you make sense of it.

Our doubts are traitors,
And make us lose the good we oft might win,
By fearing to attempt. (Measure for Measure, Act 1, Scene 4)

JV Mercanti
JV Mercanti most recently directed the critically acclaimed premiere of Songbird at 59E59 Theaters. He is currently the head of acting for the musical theater program at Pace School of Performing Arts. He served as the casting and associate director on the recent Broadway revival of “Romeo and Juliet” with Orlando Bloom. He also cast the Kevin Kline-starring revival of “Cyrano de Bergerac” with Jennifer Garner.
END_OF_DOCUMENT_TOKEN_TO_BE_REPLACED