The Truth About Prop, Makeup, and Effects Costs + Why You Shouldn’t Cut Corners 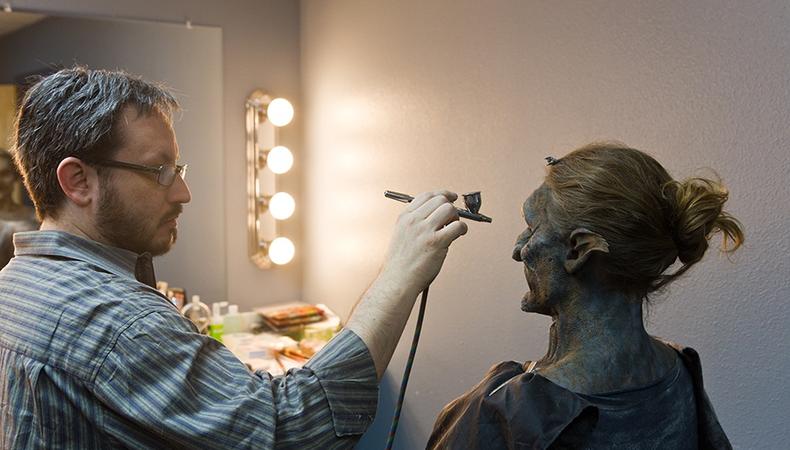 I’ve been doing makeup effects, specialty props, specialty costume elements, and prototyping for the film industry for 14 years. And if there’s one thing I’ve learned in that time, it’s that producers view my craft as a mystical unicorn floating in the sky.

What I mean is that what I do is an absolute mystery to them. Even the most inexperienced producers can calculate the cost of gear rental, catering, locations, and crew but when it comes to things that have to be made, their knowledge ends abruptly. They may come to understand the cost of basic sets that have to be built, maybe even a custom period costume, but the same knowledge of makeup effects and specialty props continues to elude them.

Now, there’s no harm in not knowing but let’s talk about the elephant in the room: what you do when don’t know can cause big problems. For example, logic and common sense would dictate that if I need a display made for a trade show or an office built for my law firm, I’d do a ton of research to get a true and accurate understanding of the costs. If I discovered those costs were too prohibitive or they exceeded what I could afford, the project would be shelved or rethought. I wouldn’t just forge ahead regardless.

But when we enter the film industry, that logic and common sense go out the window, especially when it comes to creative departments like art (set design, production design, props, etc.), costumes, CGI and visual effects, and makeup and special makeup effects.

In film, the producer or line producer either knows they can get a specific amount of money or they know they need to stay within a specific SAG-AFTRA tier. So they take all the costs they believe are non-negotiable—things like gear rental, insurance, location costs, post-production, etc.—and subtract them from the total. If they’re smart, they’ll also subtract 10-15 percent for emergencies and unforeseen expenses. After all the subtracting, whatever is left often gets arbitrarily divided amongst the art, makeup, costume, and post-production visual effects departments.

Basically, they assume they can come to a vendor like myself with any request, whether it’s cuts and bruises for a single actor in a single scene or five fully articulated werewolf suits and I can just “make it work.” But this could not be further from the truth.

Of course, sometimes the amount is enough. But typically, the money we’re offered is a far cry from what’s needed. And every time, I ask, “Why didn’t you research costs before seeking financing?” Though it’s rarely admitted, the culprit is usually eagerness. “We need to make this film RIGHT NOW, no matter how much we have to sacrifice!”

Another note: many producers think they can just rent this stuff and while in some cases you can get a generic body part, you can’t customize them in any way. (Plus, many rentals are in lousy condition.) Don’t even think about asking to rent a creature suit unless it’s a generic animal; someone paid for that suit to be designed and it’s likely protected by an NDA or is too specific to the film it was created for that it can’t be used elsewhere.

At the end of the day, sometimes the only solution for the problem is more money (and often more time). If someone tells you they can create a custom creature suit from scratch in four days, prepare to be underwhelmed or have it fall apart after a few hours.

Please understand that us creators know that budgets are limited, but you also need to know that the things we need to create (and live) cost money. A legal wage, material costs and kit fees, and a great contract will secure you a great artist who will produce great work. If you can’t pay for a $50 steak, order a burger. If a burger won’t cut it, wait and save up the money for that steak. If you respect us and approach us the right way, we will respond in kind. If you call up with demands or unrealistic requests, you’ll always get less than what you need.

Michael Dinetz
Michael Dinetz is a 14-year veteran of the motion picture industry in the field of special makeup effects. With a focus on craft, innovation, technique, and realism, Michael has worked in all avenues of the industry.
END_OF_DOCUMENT_TOKEN_TO_BE_REPLACED