With her devastating turn in “Pieces of a Woman,” the actor is giving us everything she’s got

Vanessa Kirby remembers the exact moment she realized what acting might actually be. That it occurred during a performance of a “probably terrible” all-girls’ production of “Hamlet” is beside the point. 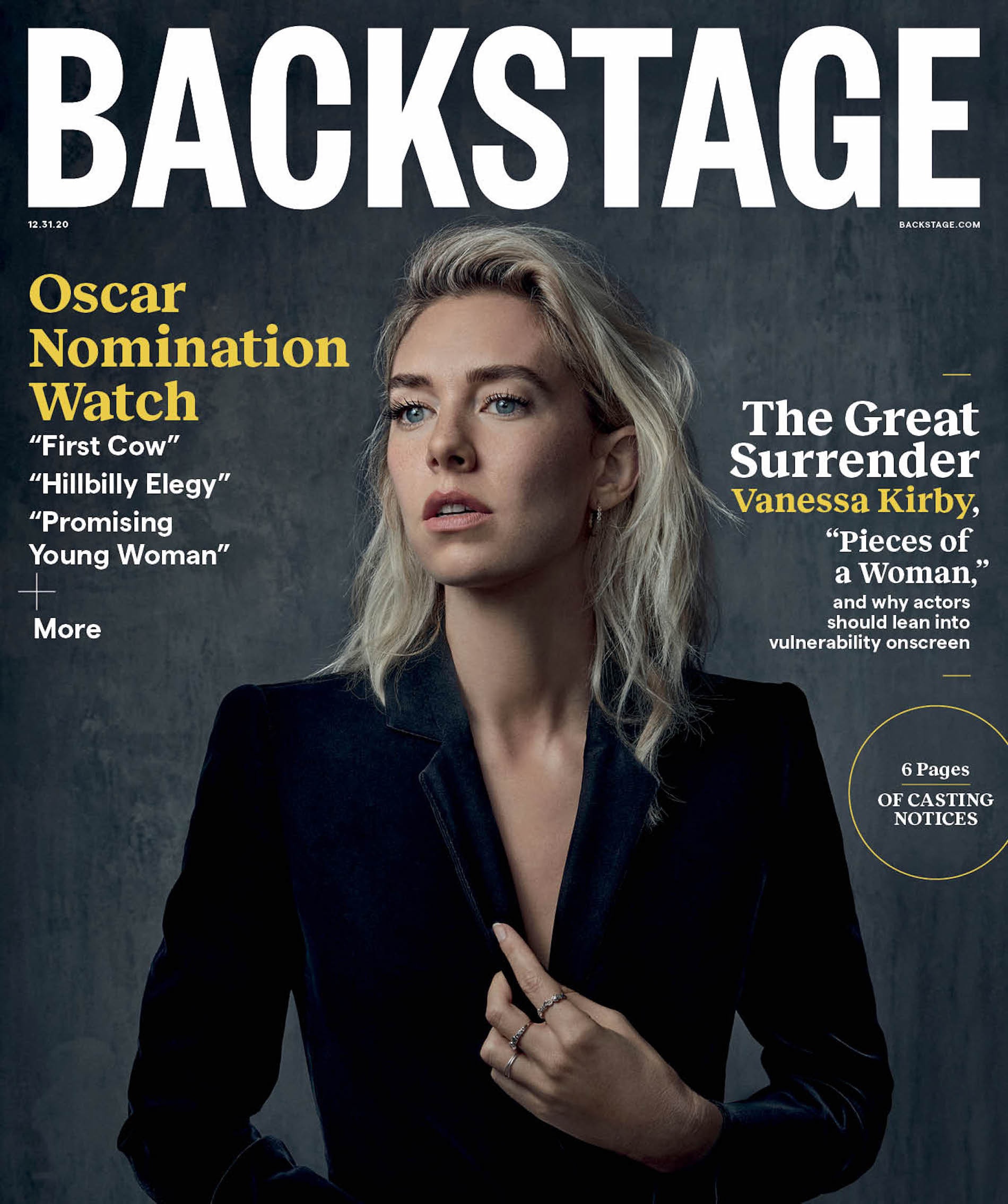 “I was playing Gertrude, probably in my mom’s clothes—complete crap,” she says with a laugh. “I remember being in a scene and then walking out into the school. I was walking up and down the corridor before going back on for another scene, and it was the first time it ever happened where I suddenly was thinking [Gertrude’s] thoughts. I was thinking, in the present moment, her actual thoughts about what was really happening. And then it made the scene coming next so much easier, because there was a blurred moment where this idea of [a] character being outside of you or someone that you have to become disappeared in a way.

“I just realized,” she continues, “Oh, it’s inside me.” Kirby has been chasing that lucid high ever since.

You may get it for just two seconds in the entire production of a film, she concedes, and longer only if you’re lucky. But she believes that its attainment should always be the actor’s primary objective: reaching that liminal space where you no longer have to think of yourself as the character and you can instead—speaking of “Hamlet”—just be. Kirby describes getting “into that zone” where you are inside the character as much as they are inside of you.

“I always think about it as this really strange process of finding the person, because the person kind of exists in the abstract space, I guess, between you and the words on the page,” she says, “which also have come through a writer and their own experience. And so there’s this third space in the middle that you have to sort of get inside, and it takes a lot of time.”

For her new film, Kornél Mundruczó’s “Pieces of a Woman,” which earned her the Venice Film Festival’s Volpi Cup for best actress earlier this year, Kirby, by her account, had to “get inside” three separate elements. The first two, being pregnant and giving birth, are experiences shared by women the world over. But the third required her to tap into something more hushed, a sort of sad sisterhood that she thinks isn’t spoken about enough: “what it actually feels like to lose a baby just after it’s born.”

“That involved finding and spending so much time with the women who had been through that, which was a massive privilege, actually,” she says, noting their bravery. “They pretty much all said it’s so difficult, because society doesn’t want to hear about it. These women haven’t had a voice, really, in their experience of that level of grief or loss, because society doesn’t want them to talk about it.” 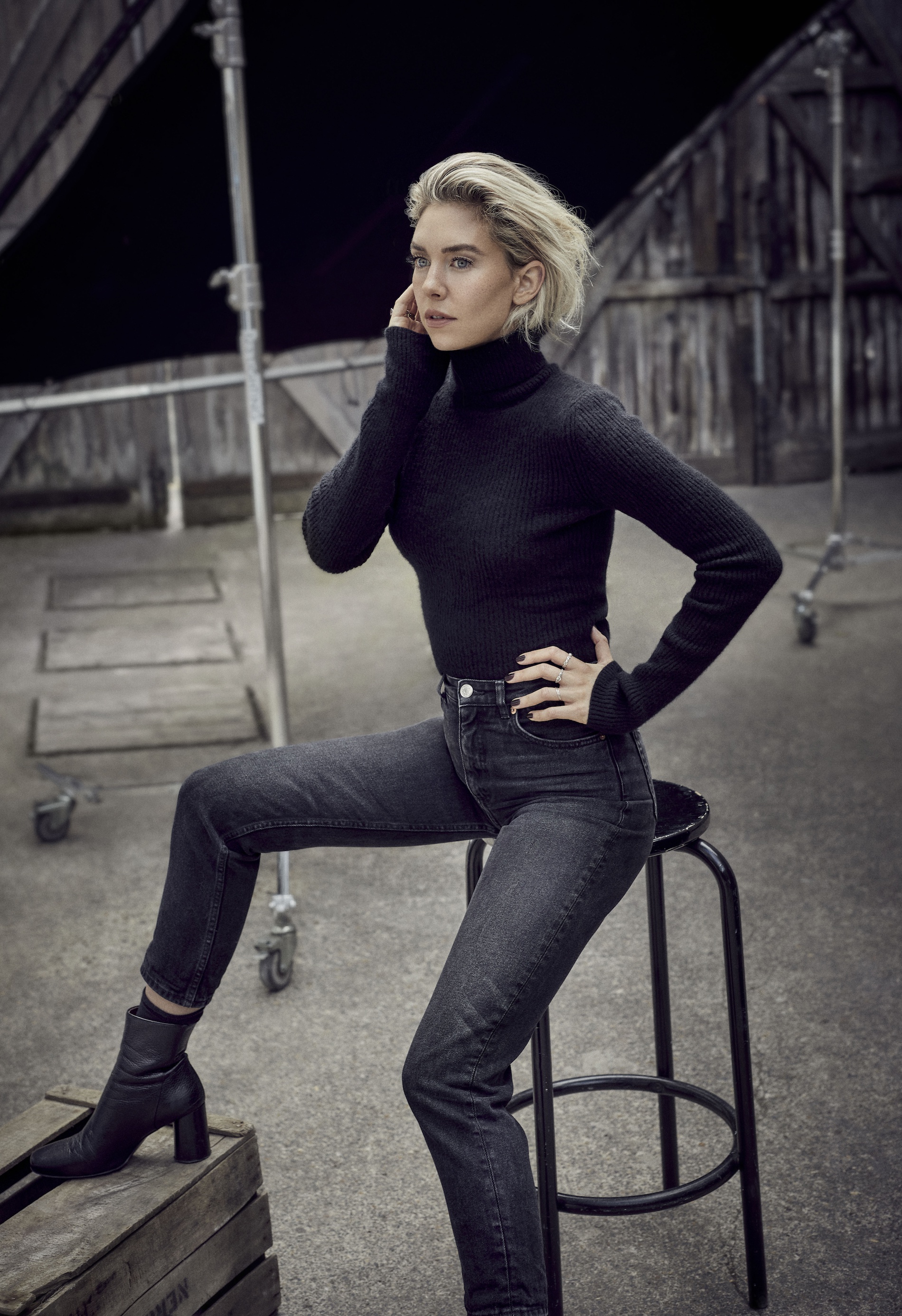 She cites model-entrepreneur Chrissy Teigen, who recently shared her experience of pregnancy loss online and was immediately subjected to charged responses across the spectrum, from adulation and gratitude to utter vitriol. “It just goes to show that a loss like that is really hard for people to hear about,” Kirby says. “I felt really honored to be part of this film in that way, because I think it speaks to grief universally.”

“It’s always best to tell your fear, ‘You can join me in the passenger seat, but you’re not going to be driving the car.’”

As she chats via Zoom just before Thanksgiving (though that likely doesn’t matter much to Kirby, who’s British), it’s fitting—and appropriately disarming—that the conversation begins with subject matter as heavy as infant and pregnancy loss, since the film does, too. Written by Kata Wéber, the Netflix feature (which will stream starting Jan. 7, 2021) almost immediately showcases a 25-minute labor and delivery sequence unlike any you’ve seen on film before—an intimidating prospect that was also part of the appeal for Kirby. She confesses, however, that her initial response to reading it was a more visceral “Oh, God.”

“We see death so many times onscreen, and we don’t really see birth in this way. I also can’t remember seeing a film that dealt with losing a baby so head-on,” she says. “Doing the film has really set a kind of benchmark for me of wanting to find things that haven’t been seen or expressed onscreen before that need to be [seen in order] to generate conversation around them, to represent a side of being female that we haven’t seen. Those two things really struck me—and scared me a lot.”

In discussing her work, fear comes up quite a bit for Kirby—or rather, how to cope with it. At the age of 32, she has already had more success than many actors ever do. Most notably, she earned an Emmy nomination in 2018 for her work on “The Crown,” playing Princess Margaret on the series’ first two seasons before handing the tiara off to Helena Bonham Carter. She also starred in “Mission: Impossible – Fallout,” has secured a role in the franchise’s coming seventh and eighth installments, and boasts numerous prestigious theater credits.

READ: How Claire Foy Landed Top Billing
on ‘The Crown’

But an unmistakable angst hums beneath everything Kirby does. Making peace with that feeling continues to be the lifeblood of her career. “One of my friends said something like, ‘It’s always best to tell your fear [that] you can join me in the passenger seat. You’re not going to be driving the car, but you’re welcome to be here,’ ” she says. “It’s inevitable that you feel anxious or nervous, I think. I can’t just switch off my stage fright or my anxiety before going onstage, and the more I try and fight it, the worse it gets. I have to welcome it and be like, ‘It’s OK; you can be here. You’re not going to ruin the show.’ ”

The most useful tool Kirby has found to combat anxiety, nerves, fear—whatever word you want to use for that prohibitive lurking—is old-fashioned preparation. Knowing her lines inside and out, front to back, sideways and in proverbial heels, gives her the freedom to show up and be present.

“These women haven’t had a voice, really, in their experience of that level of grief or loss, because society doesn’t want them to talk about it.”

It’s an odd sort of reconciliation to have prepped so thoroughly that you can act from a place of impulse, but one she considers crucial. “I learned that the hard way,” she says with a chuckle. “Sometimes I would approach jobs like, I’m just going to see what happens if I don’t learn my lines—just wing it on the day. Maybe it will be more spontaneous and impulsive, and it’ll be more flippant. And it wasn’t. Oh, my God, no, it wasn’t.”

While that trial and error informs her now-scrupulous prep work, Kirby gives credit where it’s due and admits she borrowed the approach in part from someone who knows just a bit about getting inside a character. Of course, if you worked with Anthony Hopkins, you’d do the same.

“I just had a few little scenes in this brilliant thing he was doing,” Kirby says of the 2015 television film “The Dresser.” “He has a method that he’s always used where he says his lines out loud to himself a thousand times before doing any film. He’ll mark it on his script [and] tally it up, because he said you can’t be truly free unless it’s really in your body. You won’t be able to take the risk and go, ‘OK, I’m feeling the feeling of the state of mind this person’s in’ so that the lines can come out however which way they want to [because they’re] coming from that feeling, as opposed to, ‘I made a decision, I’ve learned my lines, I kind of know how I’m going to say them, and I’m going to turn up and just say them in a prepared manner.’ ”

In other words, you reach a state in which you no longer have to be conscious of your “choices,” because they will be externalized actions made by the internalized character. To actually achieve that symbiosis, Kirby explains, you have to practice an almost relentless empathy in order to “absolve all your judgments” of the person you’re playing.

“Acting’s such a funny job, isn’t it? How you think informs how you feel. And then how you feel, as a consequence, informs how you think,” she posits. “There’s a conversation between your feelings and thoughts all the time. And so it’s almost like trying to get inside someone else’s thoughts—so then you don’t have to worry about how the person is coming across or the mannerisms or whatever else, because you’ve built it from the inside, and that’s what happens naturally. The best acting experience, really, is when you’re thinking as that person without being conscious of yourself.” 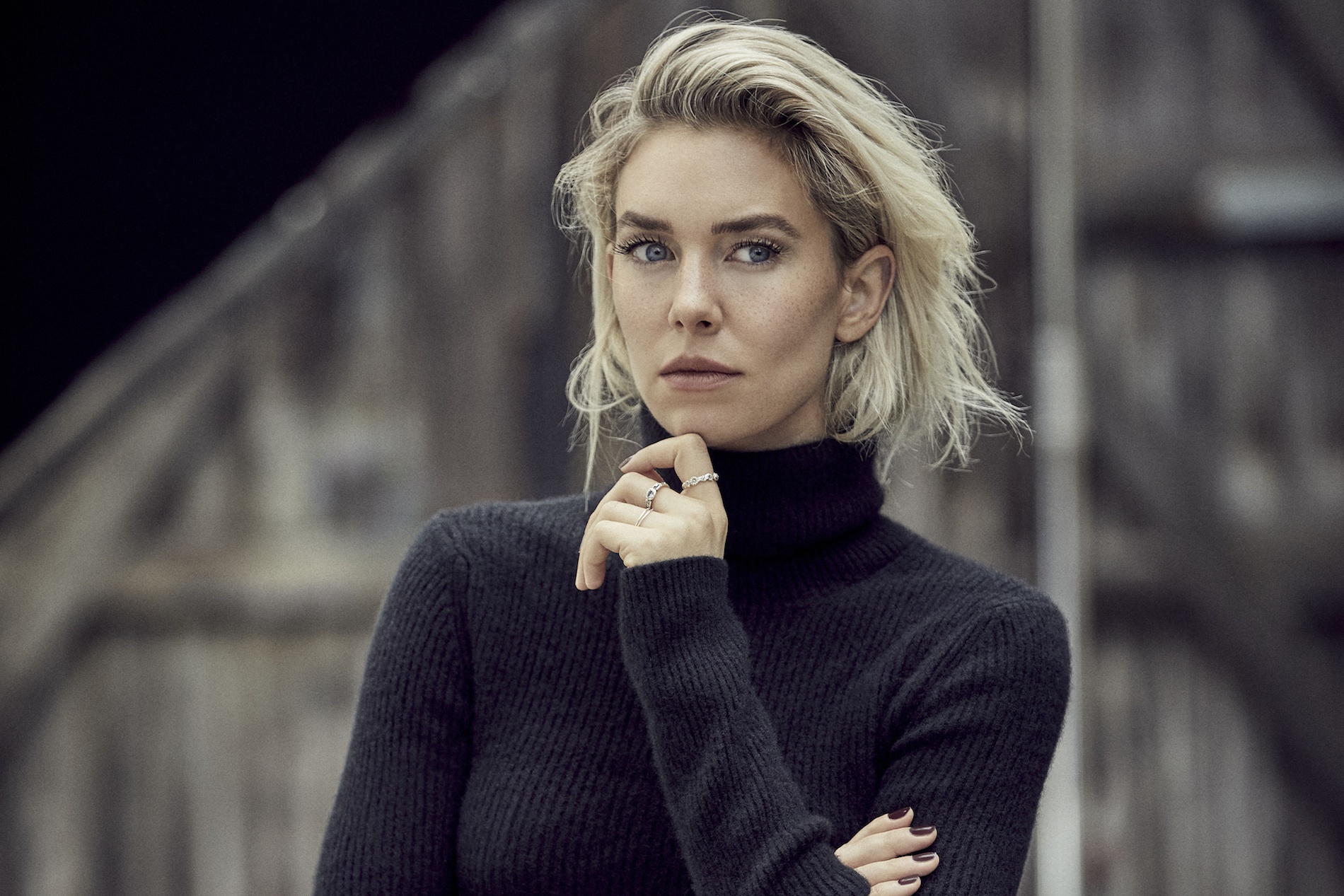 The Catch-22, particularly for Kirby, is that fear, or even self-consciousness, will block the receptacles of empathy. If you as the actor at any point aim to shield yourself from the experiences of your character, you could be tossing out a crucial piece of their puzzle.

“As an actor, you don’t want to protect yourself. I think it’s almost the opposite,” she says. “I find I’m less shy, for example, when I’m playing someone, when I’m trying to understand someone else or some other part of humanity. You take more risks, and you sort of push into parts of yourself that you might not every day know existed, because you have to feel the things that they feel.”

That is one reason why Kirby creates playlists for her characters. In addition to drowning out literal noise on set between setups, delving into what a character’s taste in music might be—or why they’d listen to a given song at a given moment—opens a window into their psychology. In a pinch, the music can build an impromptu bridge between herself and the person within. It can also help ease her gently into a particularly formidable role, fear be damned.

“This idea of being daunted by something—I look for it. I go, ‘Oh, my God. I have no idea about this. I don’t know what it feels like to give birth, and I would love to learn about that,’ ” she says. “Of course, my dad is a cancer surgeon, so I grew up with him saving people’s lives. I always felt like acting is such a public thing, but it’s really not nearly as important as what a lot of people are doing in the world. But when you’re in a group of people who want to explore or understand something that perhaps we don’t yet know from our lived experiences, it does feel, sometimes, like such an honor.”

Casey Mink
Casey Mink is the senior staff writer at Backstage. When she's not writing about television, film, or theater, she is definitely somewhere watching it.
END_OF_DOCUMENT_TOKEN_TO_BE_REPLACED