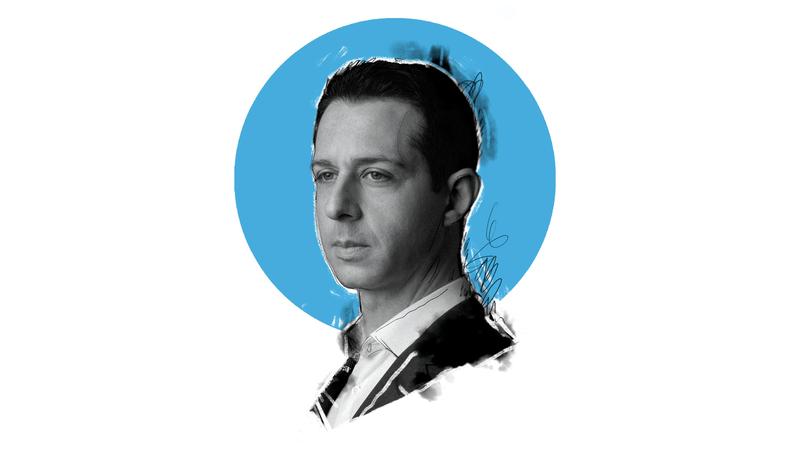 During his months filming HBO’s “Succession,” Jeremy Strong jumped at the opportunity to evaluate the psyche of his character, the driven, hardheaded Kendall Roy, who now has him in awards talks. The actor’s process is all-consuming, from internalizing the script to reading books related to Kendall’s cutthroat business world. Here, he discusses how tapping into a character’s subconscious allows for a free performance.

You’ve worked on TV, film, and theater. What do each of those mediums provide for you?
Something I love about the theater is the ability, in real time, to take a journey. What initially made me want to be an actor is that experience of both going through something and losing oneself. I’ve discovered such a freedom onstage that I have tried as much as possible to recreate working in film and television. With film and television, the process is so different because you don’t get to take that journey all at once. I read an interview with the painter Cy Twombly before he died, and he talked about the act of making a painting as an active trance. I think that active trance is something very easy to achieve in the theater and something that’s very difficult to achieve in film and television because of the fragmented nature of the process and also the environment that you’re in. You’re surrounded by trucks and cables and there are people coming up to you fixing your hair. Everything around you is conspiring to undermine your sense of belief in the reality of it. Whereas in the theater you’re in the environment, so your sense of belief can be easily piqued. That’s what you can’t have in film, but what you do have is you don’t have to magnify anything the way you do in the theater. You really can have an authentic experience without contriving, I hope.

When it comes to Kendall, from the room destruction scene in the pilot to his vocal quirks, what advice would you give actors in making these sort of improvisational choices?
I don’t know that I’ve ever experienced it as a choice, [but] I know that word is used a lot when it comes to acting. My experience is trying to internalize everything about the script as best as I possibly can and then letting my instincts fire off however they will. [David] Mamet said this interesting thing in his book that stuck with me: “Invent nothing, deny nothing.” With those choices and quirks, I don’t think I invented them in any conscious way, but I allowed them to emerge from whatever dark room was inside where I was trying to fill it up with the script and the ways in which I relate and personalize what his struggles are, and a lot of vast research and reading in the milieu in the show takes place. The more you fill up that reservoir of the character in your unconscious, the more instincts will operate. They have their own intelligence, and I think our jobs as actors is to trust in that without understanding.

What has your latest role on “Succession” added to your acting skills?
I had never worked on something in long form. This was six months of working, and it allowed me to go beyond myself and my perceived limitations. It allowed me to discover myself as an actor, discover more what I was capable of. If you had told me when I was 22 and working in room service in New York that I would get to do something like this, I would certainly say this is the ultimate form of what I hoped to do as an actor.

READ: Kieran Culkin Explains Why Actors Shouldn’t Think so Much

Tell me more about working in room service. Any other survival jobs?
I waited tables, I was a PA, I worked in shredding documents, I worked as a temp. I worked in room service in a hotel in SoHo that did not have an elevator for employees, so you had to walk up 315 flights with trays of $30 orange juice. There was something squalid about my life, but poetic. I also had other kinds of jobs that were more creative. I worked for the late Wendy Wasserstein, and I worked for Daniel Day-Lewis on a film he made with his wife.

What advice would you give your younger self?
It’s hard to say to a younger actor to trust [in] whatever wilderness they feel that they’re in, [that] if they keep showing up and they keep putting themselves on the line and doing the best work they’re capable of offering, however landlocked you feel, it does come. Things conspire to help that come about if you keep showing up. I would say don’t despair.

Always easier said than done.
I know! And maybe despair is a part of it. It’s certainly been a constant companion along with doubt and, at the same time, courage. I think it’s part and parcel of the experience of doing this with your life. I remember hearing Phil Hoffman talk when I was an undergraduate, and him saying his experience of being a young actor was always vacillating between the word “please” and “fuck you.” The “please” part, actors are very good at in the sense of feeling themselves as supplicant and without any power. The sense of having some kind of inner defiance and an inner sense that you’re going to fight for this is [also] important.

How do you typically prepare for an audition?
Know the material. [That] doesn’t mean have prescribed notions of what you’re going to do in the room or clever ideas about some effect or result that you want to achieve with it. It really just means to know the material backward and forward and maybe 100 times more than you think you need to. If you don’t know it well enough to still know it in the middle of a cyclone, then you don’t know it well enough. Only then might you have the ability to be present and listen, which is the beginning of everything.

Just look at it as a chance to perform.
It’s a chance, in my mind, to go in and fuck around. It’s an exercise; be loose, talk and listen, [and] if something happens in the room, great. There are a lot of people who talk about “you should never be nervous,” but I don’t know that I agree with that. If our job is to ultimately embody the whole spectrum of what people go through, I feel like we shouldn’t learn to disavow those parts of ourselves or be ashamed of them. We feel desperate because we care so much. Caring that much about the scene and what’s at stake for the character is a good place to put that caring rather than caring about getting the job.

That’s a good point, to not compartmentalize feelings but use them as fuel instead.
What a lot of people do is to try to cut off those feelings—that fear, which is just the inverse of excitement. That fear is energy. That energy can be transformed and put in service of the scene, always.

Have you ever used Backstage in the past?
Back in the day! Backstage is obviously such an iconic thing for all of us actors. We’ve all been waiting for the subway and seen pictures and interviews with people we look up to who are doing the kind of work we aspire to do. It’s been a standard-bearer. It’s representative, in my mind, of the fervent years. The fervent years apply to anyone who is a young actor in New York. That’s what Backstage is to me.