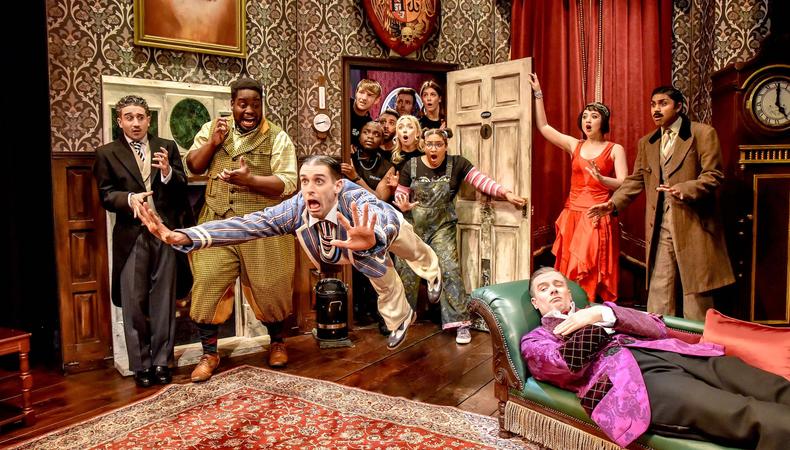 “The idea is you shouldn’t notice them,” says Nancy Zamit, an original cast member and co-creator of West End hit The Play That Goes Wrong. She’s referring to the live sound effects that are used throughout the show, performed in the wings by whichever actor happens to be offstage at the time.

The genre slapstick gets its name from the percussive instrument that is used to create a noise as someone gets hit or falls. It’s just one of several items that you will find in the wings at the Duchess Theatre, where the show is currently playing.

Zamit says that the production is all about “enhancing” the audience experience. “It’s only if you see the show without the naps [sound effects] that you realise what they do,” she explains. “It’s like a piece of music; it’s so integral to the rhythm of the show.”

Tools of the trade

Among the instruments at the cast’s disposal are a giant floor slapstick, used to soundtrack the big knockouts in the show; a bin filled with bits of metal; and a strip of velcro, which accompanies the action of a sideburn being ripped off.

Many of these items were made by the company members themselves when the show originated at the Old Red Lion Theatre in 2012. “We’ve tried using more high-tech alternatives,” says Zamit, “but it’s just not the same. Even on Broadway, we were still using two bits of wood screwed together.”

Precision is everything, she adds, and it’s crucial that the weight of the sound effect matches the scale of the stunt. Too loud, and it will overwhelm it, too soft, and it will go unnoticed. For this reason, they keep a range of different slapsticks composed of different materials in their arsenal.

All in the timing

Current cast member Oliver Mott says that when it comes to timing, a fraction of a second can make a huge difference. “You know when you’ve done a good job, because you hear the audience gasp and then laugh. That’s when you’ve hit a really sweet spot.”

Although he says the responsibility for creating effects means that he can’t really relax backstage, Mott says he enjoys the payoff. “You have to constantly be listening, but when you get it right, it’s really satisfying.”

Is there a particularly challenging one to nail? “There’s a moment when an actor falls through a window onto a crash mat,” he says. “You have to time the sound effect so it comes when they would hit the floor rather than the mat. It’s a split second, but it makes all the difference.”

When it doesn’t go to plan

There’s an obvious irony to these mishaps, considering the title of the show. Zamit recalls an incident in which a cast member dislocated their shoulder during the show and was taken to a waiting ambulance, and some of the audience members thought it was all part of the act.

The worst thing about mistiming the sound cues, she adds, is that rather than create new hilarity, it tends to do the opposite. “It’s just a lack of laughter, which is awful. It’s like removing a joke that should be there, which is really disappointing.”

So remember, keep your wits about you, and work on your timing. It’s only then that The Play That Goes Wrong goes right.