The Rise of Slam Poetry + How it Sharpens Improv 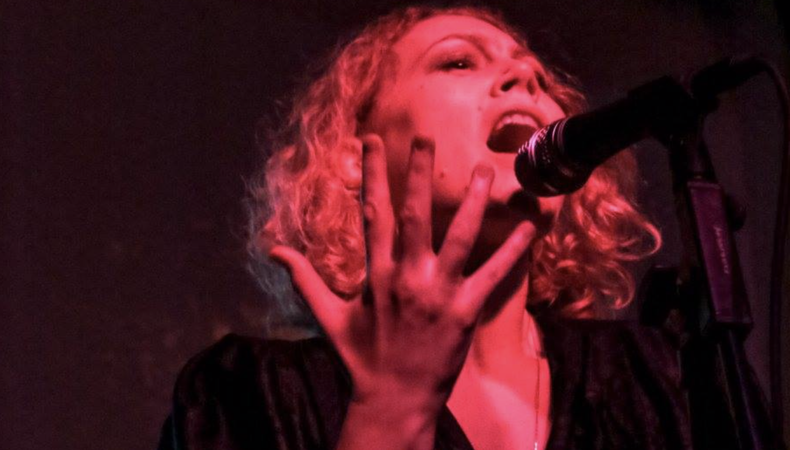 This is Notes From the Edge, a series reporting from the sharp edge of the UK’s creative industries. This week, we discover what’s stirring in the world of Slam Poetry, why it matters and how it really sharpens those improv muscles…

There is low chatter in the room, then an excited hush as the poets take to the stage. But they aren’t who you’re expecting: where are all the big geek glasses and earnest students peering over huge books? Or the awkward throat-clears as the poets begin interminable readings about Marxism?

Instead, a young woman takes to the stage. She starts by telling a joke in a strong regional accent. She talks about mental health; she talks about her relationship with her father. She holds the audience, rapt, in her hand and makes them laugh and then cry. Next on stage is a young man. He wears a pair of collectable trainers and he starts by talking about his background as a young black man and how poetry helps him to express himself. He is eloquent and talks about fear and racism and hatred during his two-minute set.

What’s going on? Slam poetry is what is going on.

What even is ‘slam poetry’?
It’s a form of poetry where people express their own story. It can rhyme or can take the form of a narrative tale. Slam poetry often discusses subjects that are of the moment and have urban connotations – it’s unlikely you’d ever see someone standing on stage talking about Millais, or rivers, unless they were exploring stigma or a something to do with a broken society. You can set slam poetry to music – or words can be spoken without accompaniment.

Who’s doing it?
Kate Tempest is the name on everyone’s lips when people talk about poets who have made it. Tempest has long since been part of mainstream pop culture after being nominated for best female solo performer at the Brit Awards in 2018. Other well-known artists include Jess Green, George the Poet and Scroobius Pip, who also has a record label and hosts a radio show. Stages at Glastonbury and festivals like The Last Word have helped boost the status of performance poetry.

Why does it matter?
Slam poetry can connect people between different social groups, and serves an important function given the current political environment – it allows people to speak about things that are of the moment, and to talk about politics and society without being too heavy-handed. “Good poetry taps into the vein of what people are talking about,” says Mike Southall, resident poet at Leeds-based event Sunday Practise.

He told Backstage: “It’s important that what you’re saying is true. I need to believe what you’re telling me. There are millions of poems about mental health which is great, but you have to bring a new angle to it, tell your own story too.”

It’s also a great way to boost self-confidence and self-expression in adults as well as kids – groups like Apples and Snakes have invested in children to get them interested and involved in spoken word.

Why should I care?
Poetry slams are a great training ground to pit yourself against quick-witted wordsmiths in public to boost exposure and develop your skills as a writer/performer and improv artist.

Getting up on stage and performing is difficult, even more so when it’s your own stuff. Performing poetry is a good way to practice, which is never a bad thing. Poetry slams are often tightly timed competitions, where performers must share their poetry round by round, progressing towards the final.

For actors who are also writers, slam poetry is one of the best ways to combine performing and writing your own material. Clair Whitefield is a writer, poet and performer. She told Backstage: “I did slams and open mic nights for years and years before my confidence grew enough to do a one-woman show. So, I think it taught me perseverance and it gave me a community too.”

For Whitefield, performing poetry also gave her a greater love of words and a greater understanding of human experience. “I have seen Andrew Motion perform in [the] same room above a pub as Kate Tempest and Scroobius Pip alongside so many other poets, all bringing their words, stories, tells and heartache into the open.

“Whenever you go to a poetry reading or open mic, you’ll hear at least one poem that’ll resonate, something that’ll hit you so hard you feel that it was meant for you, a sort of direct message from the cosmos, a flash of piercing light that’ll help you make better sense of the world, your place in it and whatever puzzling emotional soup you find yourself in…Open mic is a tonic for the spirit and a kind of roulette, you never know what kind of poem or poet you're going to get, which is what makes it.”

Mike Southall thinks the short format of slam poetry is great for dwindling attention spans: “It’s easier to digest, especially when there’s so much info. These short poems are super impactful. There’s also nowhere to hide – it forces the artist to get better.”

He adds that slam is a great way to develop stage skills: “Confidence, for sure, but also the ability to rhyme. There’s nothing wrong with poets who write in monologues, but I love making it rhyme.”

Get involved.
“Get better by going to events,” says Southall. “See spoken word live, see slams, compete, get up there.”

But it’s not a walk in the park. For Whitefield, it’s the competitive element of Slams that she was always uneasy with: “Pitting poet against poet, soul against soul never sat right with me. But it’s part of the poetry scene along with open mic nights. I am not a competitive person so it always felt like a necessary evil, a way of proving your mettle and earning your stripes because once you've won a slam or two, people ask you to do feature slots [10–20 minutes’ worth of poems].”

Whitefield’s favourite Slam – and the one that parodies the slam format the best – is a night run by Paula Varjack and Dan Simpson called the Anti-Slam. “It turns the whole format on its head and it’s the person who writes the worst possible poem that wins. And I am very proud to say that I won the Valentine’s Day Anti-Slam in 2017!”