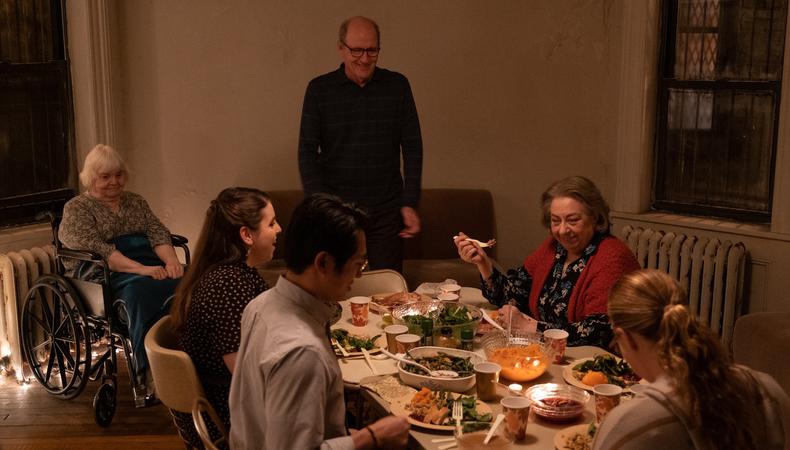 A24’s “The Humans” may be one of the rare stage-to-film adaptations that is actually better than its source material. And that source material, considering it won the 2016 Tony Award for best play and was a finalist for the Pulitzer Prize for Drama, was very good to begin with. But Stephen Karam brings his own play to even more thoroughly harrowing life on the big screen, with help from production designer David Gropman. Here, Gropman explains how he and Karam created the least desirable duplex in lower Manhattan.

Had you seen the play “The Humans” before getting this job?

No, I hadn’t seen the play. And ironically, when I was starting my career as a designer, I did a fair amount of Broadway in my youth, and certainly regional theater and Off-Broadway. I have actually done seven films based on stage plays—mostly stage plays that take place in one house or one room—and I had never seen any of them. So Stephen and I met at a little cafe by his apartment in Chinatown and we had a nice chat, and then he asked if I had time to walk around the Lower East Side and Chinatown with him. So we walked around the neighborhood, and we looked at a lot of buildings from the outside that inspired him in writing the piece. We poked our heads into a couple of entryways that were open or windows that we could peek through. 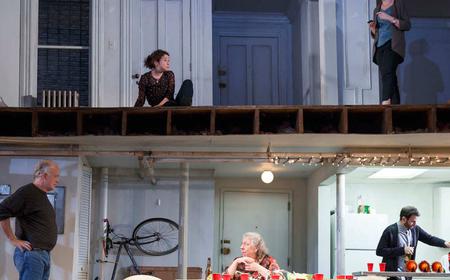 Stephen Karam on Infusing ‘The Humans’ With Dread

The apartment is really a character in this film. Where did you begin in terms of actually bringing it to life?

It was inspired by one of Stephen’s first apartments in New York. And I have to say, the first time I read the screenplay, just from a design point of view, I thought, This is a little bit of a disconnect, because a duplex is a coveted piece of property in Manhattan, especially for a young couple. But that was his reality, and so I had to figure out how to make that a reality for everybody who watches the film. That’s key: how to do that honestly—not theatrically—so that it resonates for people watching the story unfold, and so that they don’t question the world that the film is introducing them to. I started with a lot of research—just looking at grand plans of tenement apartments.

The movie has a really claustrophobic feel. Did you work with the director of photography to achieve that?

Absolutely. And the film is beautifully photographed. When Lol [Crawley, the film’s cinematographer,] came on, that was a man with a grand plan. It feels claustrophobic because, with the exception of the end of the film, we never pulled down the wall. I think that’s part of the success of the mystery of the apartment, because you can only see as much as the camera can see; the camera doesn’t get a chance to step outside of the apartment and have a full view of it. It only sees things a bit at a time.

In your work, how do you ensure the production design is helping to tell the story rather than distracting from it?

As a designer, I am a big believer in designing environments that don’t appear to be the focus of the tension; they are there to support the story, not comment on it. My approach is to start with research to figure out what exactly is necessary, and all along the way, figure out how not to play up the design, to make the thing real but not over-embellish it—to create more of a feeling and emotional response than something that the audience sits there and dissects. In the case of “The Humans,” it’s not so much about the audience noticing the set; it’s about the characters noticing the set, because that was so important to Stephen and so very much a part of his writing. We had a real road map for every single wall on the set that showed every bit of detail, that showed where all the bubbles in the wall would be, where all the cracks in the molding would be. It was all scripted.

What advice do you have for someone who wants to pursue production design in film and television?

I’ve worked with a lot of really wonderful cinematographers, and it took me the longest time to realize that what makes a great cinematographer is not necessarily their technical skills. Of course, you can’t do the job without that, but it’s [about] how they see the world. And I think it’s the same thing for a designer: You have to have the skill, but just look at things carefully. Look at locations. I always have a camera in my hand, and that helps. Stop and see what it is that you see through that lens, and see how light works. You also have to understand that your job is to be an arm of the brain of the director. Your design doesn’t mean anything if it doesn’t serve the director’s vision. Always respect that.

Casey Mink
Casey Mink is the senior staff writer at Backstage. When she's not writing about television, film, or theater, she is definitely somewhere watching it.
END_OF_DOCUMENT_TOKEN_TO_BE_REPLACED