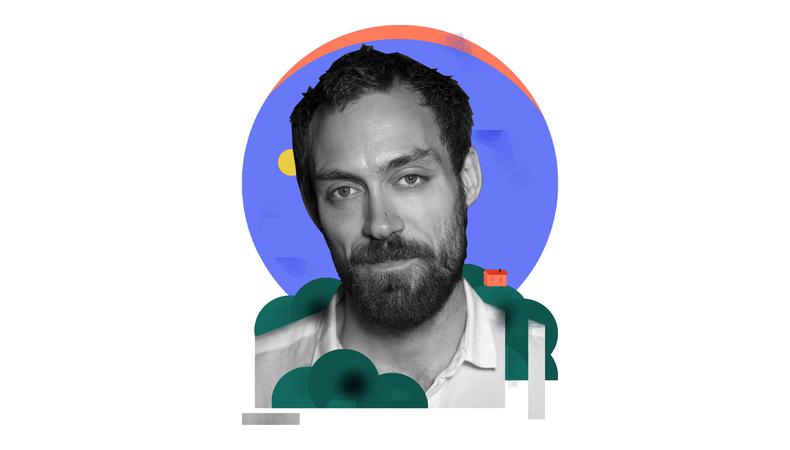 Alex Hassell’s relationship with Shakespeare runs deep: He portrayed Prince Hal in “Henry IV, Parts I and II” and the titular role in “Henry V,” both with the Royal Shakespeare Company. He also directed “Macbeth” at the theater company he founded in the U.K., Factory Theatre Company. Now, Hassell, along with Denzel Washington and Frances McDormand, is among those bringing “Macbeth” to the screen in Joel Coen’s “The Tragedy of Macbeth” (in theaters Christmas). He’ll also grace your screen as the hitman Vicious in Netflix’s live-action series “Cowboy Bebop,” premiering Nov. 19.

What was the moment you decided you wanted to be an actor?
When I was about 12, I went to see a musical called “Rock Nativity.” It was all young people in the cast. Seeing them onstage, I think a fairly narcissistic light clicked in my head where I thought, There’s two sets of people in this room: one group of people looking at the other group of people, and I’m in the wrong group. They looked like they were having fun; there was so much camaraderie between them. That day, we looked in the local paper for any productions or theater companies that were nearby. There was a company called Essex Group doing a production of “Bugsy Malone,” which happened to be my favorite film at the time. I used to walk around my little village dressed as Bugsy Malone. I thought, I’ll go and audition for “Bugsy Malone,” and I got the part of Bugsy Malone. I thought things would be as easy as that for the rest of my acting career. Unfortunately, it doesn’t quite work like that, but it was a great start.

What advice would you give your younger self?
That everyone’s path is their own path. It’s very difficult to not compare yourself to other people. You look at people’s work and you are trying to learn from other people’s work. If you can try and find joy and contentment in the moment, the work that you’re doing—while also allowing yourself to have ambition and drive, that is—in the long run, going to make things much easier and make you much happier than if you’re constantly looking at other people, asking, “Why aren’t I doing that?”

“When you get into a flow and when something strikes you as truthful, that gives you encouragement to keep going… If you get even the briefest glimpse of that, it keeps you addicted to wanting to get more of it.”

What’s the wildest thing you’ve ever done to get a role?
In terms of a role that’s crossed my desk that I’ve thought, I’m scared of this role and I really want to do it and it’s really difficult and I don’t know if I’m good enough, but it’s going to make me work very, very hard, was playing Hal and Henry V for the RSC. I did “Henry IV, I and II” and then “Henry V” in a season, it was actually over two and a half years. I remember reading those parts and thinking, I believe I can do this and have something to offer. But at the same time, there’s so much to it and it’s so deep and so detailed and so confusing and contradictory. So many of the greatest actors in Shakespearean history have played these roles.

How do you put those thoughts out of your head and dig in?
Hard work. That’s the armor. You just knuckle down and keep chipping away and having moments of insight-turned-inspiration. When you get into a flow or if you’re rehearsing and something strikes you as truthful or useful or some cornerstone of the part, that gives you encouragement to keep going. If you’re working on a brilliant piece of writing, like those plays are, and you’re able to do the work, you can then get out of the way when it’s actually happening in real time. The feeling of those emotions or those impulses flowing through you without you having to push and you’re a cypher for someone else’s work are some of the most profound artistic moments in my life. I don’t mean that you believe you’re the character, but when you’re actually feeling emotions that are sort of fabricated, but they’re not fabricated because you’ve stepped out of your own flow into this fictional one, that is such an amazing experience. If you get even the briefest glimpse of that, it keeps you addicted to wanting to get more of it.

What is your worst audition horror story?
Almost every advert audition is sort of an absolute nightmare of embarrassment. I had one and I think I had to go in and grind up against a photocopier and dance and sing at the same time. It was absolutely hideous. It was for a really big casting director. A couple of years later, I had an audition with the [same] casting director and a director I was really excited about working with. I said, “The only time I’ve met you before was this other audition.” And she said, “Oh, yeah, I think we’ve still got the tape for that.” And the director said, “Let me see the tape!” I’m like, “Why have you still got those tapes?” I’m not sure if the director wanted to see them or did see them. I didn’t get that job. So maybe he did see that tape and it was my downfall.

READ: How to Memorize Shakespeare

How did you first get your SAG-AFTRA and Equity cards?
In the U.K., I went to drama school and as you come out of drama school, you get a temporary Equity card. Then, if you start working, you naturally get your card. In the U.S., I did a film that George Clooney directed called “Suburbicon.” That was my first American gig. That meant I had a Taft-Hartley, and then straight after that you have to join the union.

What performance should every actor see and why?
One I come back to quite a lot is Marlon Brando in “A Streetcar Named Desire.” I’ve always been a big Brando fan since I was a teenager. It’s not news to say that he’s amazing in that part. There’s something of his volatility and how real he seems, but how playful. He’s like a volcano that’s going to erupt at any point.

You’ve got two huge projects releasing later this year. What has playing Vicious in “Cowboy Bebop” added to your acting skills?
I had to do a load of physical training. My character has a katana, a Japanese sword, and he’s very handy with it. That was a massive learning curve. I’ve fought with swords before onstage—in fact, in the “Henry” plays—but this is a very specific style. The character is very specific in the way that I moved and wanted to move and wanted my body to be and look and to try and embody the idea that this character has done this for a long time and he’s very good at it. It was very useful to do all of that work, because you don’t have to act certain stuff if you know how to hold a sword or if you know you can look someone up and down and know how to dismember them. It’s a helpful way to key into something.

What about “The Tragedy of Macbeth”?
I’ve done a lot of Shakespeare and I know “Macbeth” really well. I’ve directed “Macbeth’’ at my theater company, the Factory. I already knew a lot about the play and I care a great deal about iambic pentameter and Shakespeare’s use of the verse pattern. For me, a big part of it was how to do that onscreen. There’s a different task if you’re in a big theater—that’s how the language was made and built, to be performed outdoors in all weathers and to a number of thousands of people. To be able to take that language and mean it, be dexterous with it, with a camera right in your face is a really different task. It was also learning how to not lose my shit working with people like Joel and Denzel and Fran. How to believe in myself and take up my place in that amazing group of people. We rehearsed together, and they’re incredibly talented, open, collaborative people and that really helped. It was one of the most amazing experiences of my working life.

Does a project like this require more rehearsal than a non-Shakespeare work?
I’d definitely say it’s a language. Obviously, Joel has adapted this to the cinema and it’s extremely cinematic and that’s partly what’s so exciting about someone like Joel Coen taking on a piece like this, but primarily it is a dialogue. It’s mainly about the words and the use of the language and the imagery. It’s very knotty and very complex. It’s in English, but it’s Shakespearean English, which I think is useful to think of as a different language. It’s constructed in a different way. Often, words that we still use now don’t mean the same thing. You have to look up every single word to see what it means in this context. It’s not the same thing as realism, where the words are slightly less important than the emotion underneath and the words at the tip of the iceberg for emotional life. In Shakespeare, originally, there wasn’t any subtext. The words were everything. You’re explaining how you’re feeling and obviously that’s not necessarily how one would perform it this day, because we like a psychological approach. If you don’t rehearse and if you don’t get to grips with what the words mean, you’re going to be flailing around.