Alison Pill on the Unlikely Timeliness of ‘Star Trek: Picard’ + How She First Fell in Love With Acting 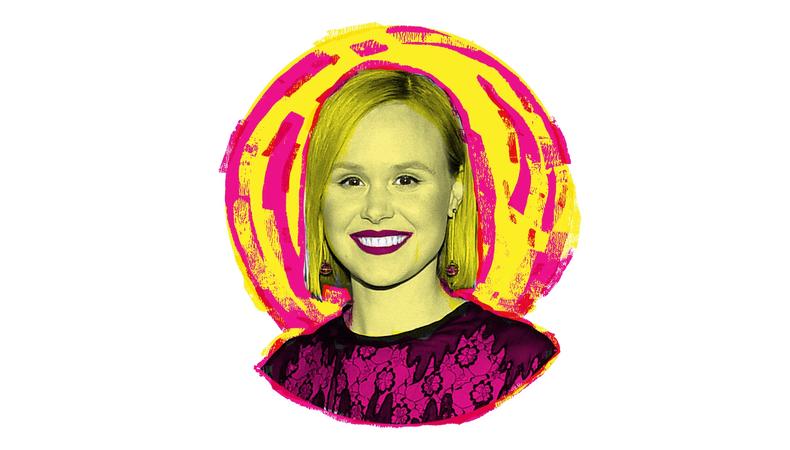 With more than two decades of film, television, and theater credits to her name—including notable performances in Broadway’s “The Lieutenant of Inishmore” and “Three Tall Women,” on HBO’s “The Newsroom,” and in last year’s Oscar-nominated Dick Cheney biopic “Vice”—Alison Pill returns to the screen for the highly anticipated CBS All Access series “Star Trek: Picard” and Amazon Prime’s “Them: Covenant.” Here, she shares why the past two years of her career have been the most fulfilling.

READ: Patrick Stewart on How to Act Fearlessly

You got your start very young, but what was the moment you decided you wanted to be an actor?
I was really interested in performing, and my mom, who had worked a little bit on the production side in Toronto in the ’70s, had an actual idea of what it meant to be on a set. She got me a background agent in an attempt to dissuade me from wanting to act professionally or to make sure I knew what I was getting into. We were shown to a green room—it was slightly misleading, because for the rest of my life, I’ve always been like, “Why isn’t this green room green?” because the green was actually green. There was a Jim Morrison poster and terrible sandwiches—and I was thrilled. It was for “Kung Fu: The Legend Continues” and David Carradine came on set and he was smoking. I was in the background pointing out vases in this little museum set with a woman who was pretending to be my mom and I was like, “This is the greatest thing in my life.” It went on forever and I was in the background pointing at vases and urns and I had a great time. And my mom realized that instead of dissuading me, it gave me more conviction that I wanted to do this and I could handle the boredom and tedium of being on set. I was probably 9 or 10.

How did you first get your Equity and SAG-AFTRA cards?
First was AFTRA, because I started in Toronto. I got my Equity card when I was 17 [and] I did my first play in New York. It was my last year of high school, and I did a play called “None of the Above.” I started the SAG process when I was 16, when I did my first movie in the States on a SAG contract.

What advice do you have for other actors from Canada or elsewhere on breaking into the American market?
I was really lucky in that my wonderful Canadian agent had met my manager, Joannie Burstein. I’ve been with Joannie since I was 12 years old. I don’t know life without Joannie. She’s like another mom. That was really helpful in that she knew an immigration lawyer. There are only so many things that are interested in getting you a visa. Independent films, smaller jobs, they’re not going to spend the time to get you a visa. Trying to work as much as possible and getting a green card, starting that process as early as possible, is really important. I was able to get my green card when I was 17, which is why I was able to do that Off-Broadway play in New York at that time, because I don’t think they would be able to get me a visa. Do whatever you can do to facilitate that by getting together a really good package to send to immigration and crossing your fingers.

What advice would you give your younger self?
I’ve had my favorite two years in terms of the breadth of characters and the quality of people I’m working with—and I don’t mean talent-wise. I’ve worked with talented people before. But I mean quality people. If you’re going to spend time away from your kid, you’d better be working with nice people on things that make the world better. I would tell my younger self [that] the things you think are important are not. The early desire to be No. 1 on the call sheet or be the lead in a movie, it’s still there to a degree, but, honestly, I have had the freedom to play such amazing and different people while also working with really kind, smart people. You don’t need to have a toxic environment to make something good. That feeling that it’s got to be hard or it’s not real doesn’t have to be there. An incredibly safe, trusting environment is essential to this kind of work. It makes it a lot easier to go to the deeper places that you might not go to when you’re a little afraid. I think the idea of a sadomasochist version of making films is slowly dying away. It’s so difficult to make a movie or TV show, let alone a good one; you don’t need to add to the difficulty in any way. You’ll be cold and tired and hungry at some point. Don’t make it worse! I think there’s a change in culture that’s slowly been happening with [people] saying, “No, that big alpha male screaming at people—it’s not necessary or good.”

What has playing Dr. Agnes Jurati in “Star Trek: Picard” added to your acting skills?
[Creator] Alex Kurtzman’s take on the “Star Trek” universe, generally, is how to make it different and contemporary in a new and interesting way. The Picard story is about mortality and refugees. But it’s in space. It’s so much about what it means to die, what it means to get old, what it means to be human. “Star Trek” has always explored what humanity is in the context of the universe, and I think this one is even more grounded in some ways than [“Star Trek: The Next Generation”]. [Writer] Michael Chabon is a really big “Star Trek” fan, and his knowledge of it is bone-deep. He’s also this wonderful novelist who has drawn some incredibly memorable characters in fiction, and to use that skill set to this different writing style, to his dream, means the depth we’re working with is a little bit different. Not to say it’s not action-driven; there are still some pretty exciting spaceship fights. The messiness of life is brought into the spaceship more than we’ve seen before.

What is your worst audition horror story?
When I first moved to New York, I did a couple of musical theater auditions and I had no business being there. I really thought I was going to vomit. I never wanted to sing in public. I didn’t get nervous for auditions or performing, but singing in public was a different beast. When you’re nervous, your throat closes up, and when you feel like you’re going to vomit, you’re not going to sing that well. I just did my first cabaret show singing in public for the first time, trying to get over that fear, which worked out really well. I recommend to everybody: Take the thing that most scares you about performing and just do it. In terms of auditioning, singing never worked out. Overall, I really like auditioning. [Laughs] I’m very lucky in that I don’t have to learn 16 pages of sides every week, which I’m very grateful for, so I do usually get more time to prepare. I don’t know how people prepare 16 pages for the next day. It’s just unfair.

What’s the wildest thing you ever did to get a role?
I did a lot to get this Thomas Vinterberg movie “Dear Wendy.” I went in for an audition and they had a different vision, so I took photos of me looking like a boy; I wrote to Thomas; I auditioned again. I flew to New York twice to meet with him. And I ended up getting it. Even most recently, for this show “Them: Covenant,” I went in and I had a vintage-looking dress—it’s set in the ’50s—and I was able to set my hair and do period makeup. Sometimes it’s helpful to wear a long skirt if it’s going to make you move a little differently.

What performance should every actor see and why?
The thing that made the biggest impression on me when I was first starting to do theater and first starting to audition in New York was I saw Mary-Louise Parker in “Proof.” Her physicality onstage, her comfort and ownership of the stage—it suddenly clicked for me. I had this audition and I had just gone to see her onstage the night before, and the way I went into that audition the next day, I was like, Oh you can be languid onstage. It’s different than on-camera. It made me more aware of how useful that can be on film, as well. You definitely have to pay attention to what is in the shot, but how helpful even if it’s not in the shot to say, “This person crosses her feet, she doesn’t cross her legs” or “This person takes up as much space as she wants.” Space-taking was the biggest lesson I learned from that.