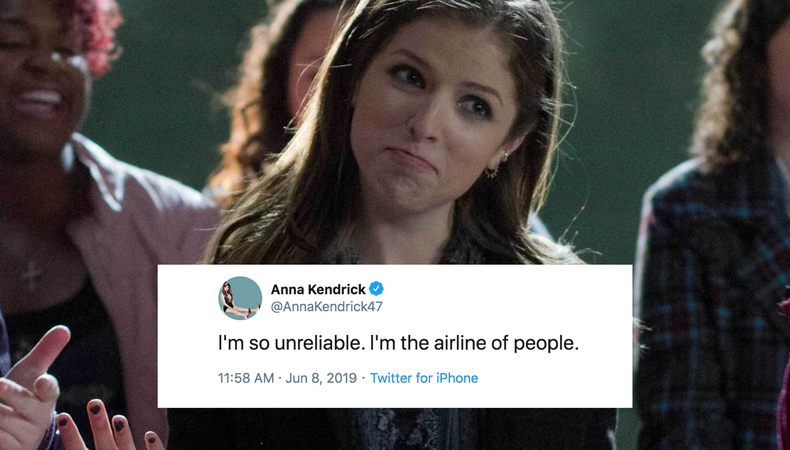 Obviously today the industry pays much of its social media attention to Instagram, and for good reason: Acting is a visual medium and, well, so is Insta. But actors should not turn their noses up at Twitter, especially if they want to brand themselves as comedic (not the same as a comedian, remember).

One actor who epitomizes the usefulness of Twitter: Anna Kendrick, who these days is known as much for her quippy 240-character thoughts as her performances in the “Pitch Perfect” series. And that’s all because she’s found her Twitter “voice,” that elusive but vital social media brand that’s equal measures funny, authentic, and endearing. And it’s notched her a cool 7.4 million followers.

Let’s be real: A little self deprecating “gettin’ real” goes a long way.

I'm so unreliable. I'm the airline of people.

Edit until I’m down to one item.

Decide it’s not even worth typing out my credit card info.

Dear Yahoo: how do I get to this timeline where I've slept with Enrique Iqlesias please and thank you. pic.twitter.com/4mmA2i7dse

Can they do a “Chopped Basic” for cooking illiterate folks like me? Give contestants tomatoes and olive oil and regular shit and I will still be like, “damn they took that stuff and made a MEAL?” Magic.

But ragging on oneself can only go so far; Anna’s got some old school Twitter jokes! (Remember, back in the day, when that website was a place where people went to make universal and funny observations? We can return to that magical time—and Miss Kendrick is trying to do so!)

The Samantha American Girl Doll seems like a bitch. Don't @ me.

I'm gonna miss the eclipse and I'm really worried no one is gonna post a crappy picture of it on instagram.

Sweatpants without pockets, you can fuck all the way off.

As a selling point, I don't understand the saying "It's like <thing you love> on steroids!"

Some things are better NOT on steroids. Most things, arguably.

The reality is, Kendrick hasn’t been the most prolific when it comes to film and television the last couple of years. But she’s stayed top of mind—and in favorable opinion—because she’s constantly reminding the industry of her charm on Twitter. Oh also, she’s poked fun at the very subject of her career, too, and it’s perfect. Be like Anna!

Holy shit. I just remembered I was in Twilight.

Want More? How to Build Your Digital Brand as an Actor!

Casey Mink
Casey Mink is the senior staff writer at Backstage. When she's not writing about television, film, or theater, she is definitely somewhere watching it.
END_OF_DOCUMENT_TOKEN_TO_BE_REPLACED