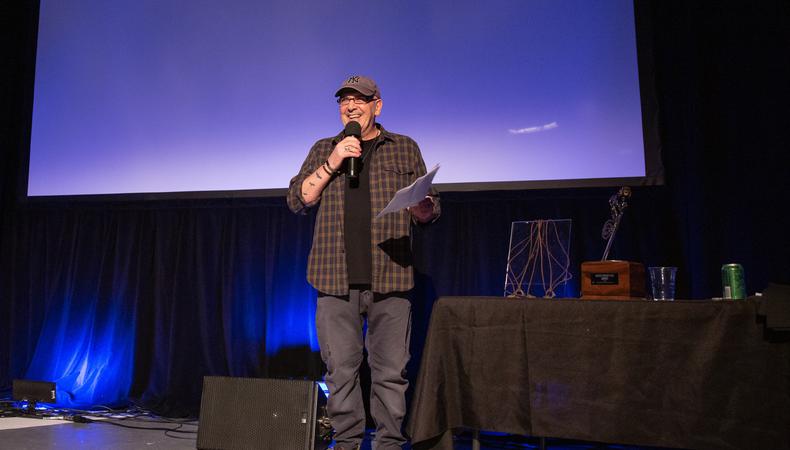 Today, BFF’s geographic sweep is a point of pride; 92 countries are represented in this year’s submissions. Those selected will play online from May 29 to June 7, following the lead of SXSW, ReelAbilities, and other fests that have implemented digital instead of in-person programming due to the COVID-19 crisis. BFF is actually going one step further in its reinvention, leaning into the pandemic’s upheaval with a “turning point” theme. Every year the festival takes “a philosophical direction,” says Ursino, and he sees 2020 as a historical inflection point that “will ultimately reveal who we are as human beings.”

Viewers can tune in for free by registering on BFF’s website, which will also allow them to vote for their favorite movies and participate in filmmaker Q&As. For a preview of what’s in store and a look behind the scenes, we spoke with Ursino, who explained his fest’s outlook, history, and focus on “the filmmakers of tomorrow.”

Tell us about the history of the Brooklyn Film Festival. Why was it founded?
The festival started as Williamsburg Brooklyn Film Festival in 1998. We did it locally in Williamsburg, where we always had the office of the festival, still as of today. The first one was at the WAH Center—Williamsburg Art and Historical Center—but then for the second one and the third and fourth, there was a theater called Commodore Theater on Broadway, just here. And like all the other theaters of that time, it’s dead, basically. It was a parking lot for a while and now is residential, following the trend of all the independent theaters that died.

We pride ourselves on one thing. Back then we didn’t even know—we are the first international competitive festival in the state of New York. The drive was exactly that, the idea of bringing foreign films and having them competing with local films and filmmakers.... Back then it was not that easy to find a foreign film in a city like New York. So basically because of that, we found a gap, and the festival grew exponentially because of it.

How does the BFF fit into the broader festival landscape?
It’s easy and difficult to answer because we always strive to remain truly independent. So we didn’t copy anybody at any stage. We always followed our heart and made the festival the way we thought a festival should be...we’re lucky because we’re over 20, and the fact that we are that age makes us an established organization. There are festivals coming up every moment, but they last two, three years. Then they figure out there’s no money, and they run.

When does the film submission process start and how does it work?
We start receiving films pretty early. The festival ends in June—[by] July, August, maximum September, we’re already back for the next year. We’ve kept our pricing affordable for the submissions. We think of ourselves as a very democratic institution, so we want everybody to submit. It, especially if you submit at the beginning, is very cheap.

We’re trying to discover, expose, and promote filmmakers at their first or second film.... Another trademark of the festival is that the smallest film can win the top prize, which is the Grand Chameleon Award. And another trademark, a very important one: films are selected only from the submissions. It’s not that we receive 2,500 submissions and then we make a couple of phone calls to other festivals and get the films that everybody likes. We don’t do that. That’s not a fair process. A fair process is you and I submit the film, and you are viewed by more than one person, and if we feel that you are a talented filmmaker, you get selected; otherwise you don’t. [Understand] that we are not a festival that puts together 150 super-sleek movies, something that we could do very easily—you know, those beautiful productions. But that’s not it. We want every type of filmmaker and every type of budget represented in the lineup. So even if a film has maybe some weakness here and there, but we see talent there, we try to do the right thing. That’s the spirit, in other words.

So the evaluation process has a broad focus rather than looking for something in particular?
Yes, because once you put those filters that I just mentioned—basically, the next thing is we do have a theme every year. We try to take a philosophical direction. Again, stress on philosophical—meaning nothing too narrow. For instance, this year the theme is Turning Point. You can pretty much apply that to everything. The idea is really to look for the filmmakers of tomorrow, to further their career and support their efforts in finding a home for the film. So we do invite the distributors to watch the films. If there is a reason why we look for premieres, it’s mostly that. The reason is the distributor comes to see the premiere, he doesn’t come to see a film that he’s already seen. We’re trying to give our best shot in collaboration with the filmmaker because it’s a work that we do together. This year alone—I was shocked myself actually, because I was doing some calculations, and basically this year we have 54 world premieres out of 148 films that we’re going to be showing.

That said, to be faithful to our philosophy, the premiere status is not mandatory. If we like a film, we take it.

What advice would you give attendees and industry professionals for getting the most out of any film festival?
Well, it’s a difficult career. The odds are against you. The competition is fierce. The distributors are what they are. They’re looking for the face that they know. They’re attached to certain stereotypes that are difficult for them to unplug from, so nobody wants to take risks.... Filmmaking is something so delicate and magic, and timing is almost everything. So there is a moment that is your moment, and if you lose that moment, it doesn’t come back.

So what advice would you give to filmmakers, especially early-career filmmakers?
Don’t go by stereotype...when you have an opportunity, you evaluate it, one-two-three, and you take it. If you have a good movie, that movie is going to make it regardless of what you’re going to do. If that movie was meant to have a life, that life will explode sooner or later. Is there the right way and the wrong way? Yeah, sure, maybe. But you know what they say in the movie industry: nobody knows anything. And I believe that. Nobody knows anything, and if you have a proposal—and if your heart tells you that it’s good—just take it. Don’t listen to the experts, just go for it.

What programming does the BFF have in addition to the festival itself?
KidsFilmFest is now 16 years old.... It has its own director and its own website, its own submission process going on. And it is exactly what it says it is. This year, we just changed the director, so there is a younger, more excited person behind [it], so she created two programs targeting two age groups. One is 3 to 7, I believe, and the other one is 8 to 12. We do something called BFF Exchange, and this year, unfortunately, we canceled that because of the nature of the event. It’s all about getting together in a room and discussing...it’s panels and film pitching work in progress. And it’s seminars, so basically experts talking about the legal aspects of moviemaking, the distribution aspect, but it’s one day completely dedicated to that.

What’s your favorite film or project seen recently?
Right now there are a few series that I’m really enjoying, “My Brilliant Friend” would be one that I’m following. And then there are some series that I keep watching again because I find them so great. Maybe they’re a little cheesy, but I love [them]. One is “The 100.”