Bill Skarsgård is on his feet, furiously pumping his arms back and forth. Standing 6-foot-4, he could cover a lot of ground if he wanted to, but he’s channeling a specific 5-year-old at play here.

We are talking about picking up other people’s physicalities and incorporating bits and pieces of them into his characters when he shoots up to demonstrate his bag of tricks. Standing in the open space of an Upper West Side home’s library, he brings his shoulders up to his ears, keeping the energy in his top half akin to a runner sprinting to his finish line, while from the waist down he appears more as a slow loris than Sonic the Hedgehog. 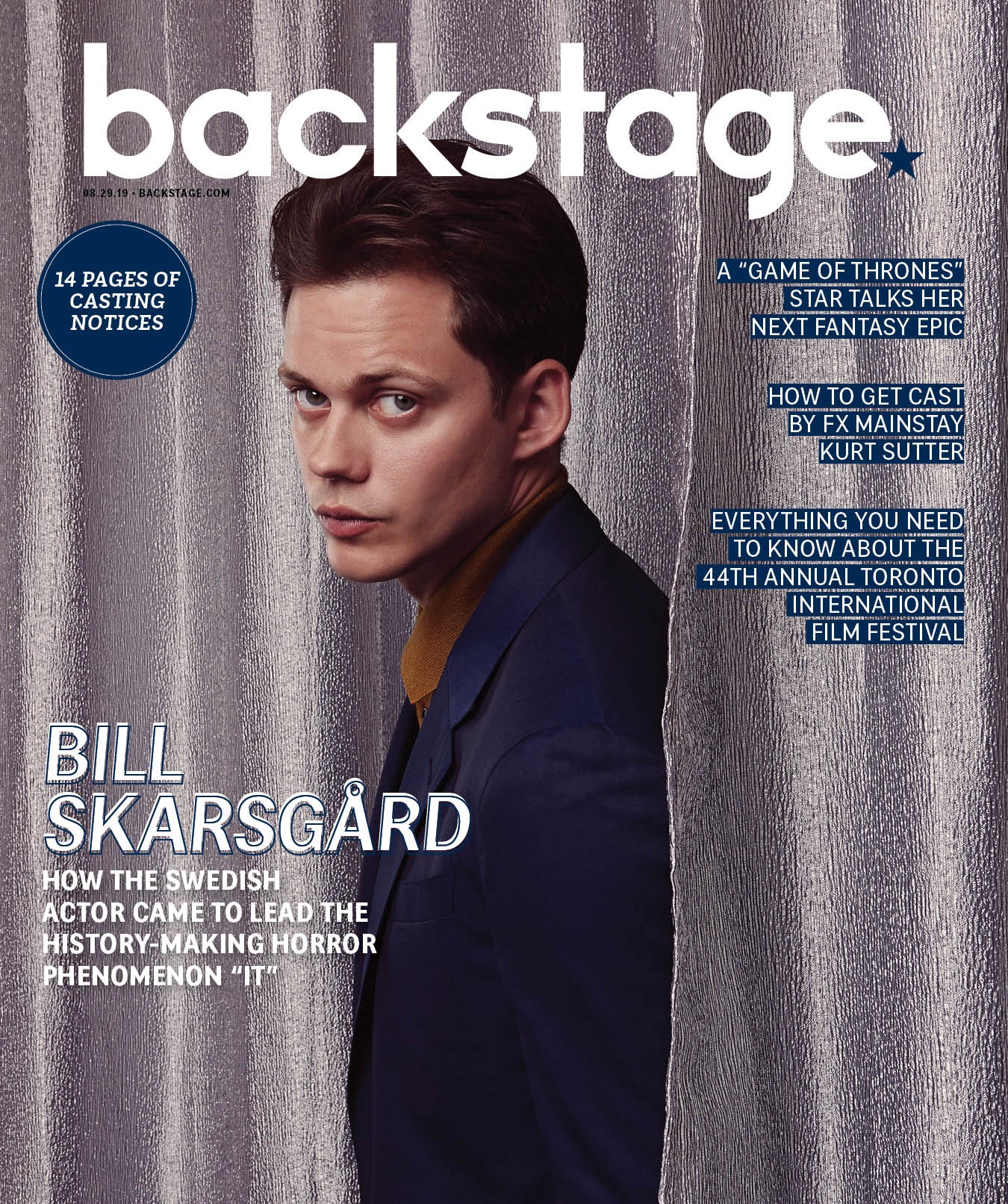 “That’s my little brother [Ossian],” Skarsgård says with a laugh, explaining the movement’s inspiration. “He’s 10 now, but when he was 4 or 5, he had a really funny way of running. You ever see kids do this? It’s the funniest thing ever.” Funny, sure, but when done by someone of the actor’s stature, slightly bewildering and creepy. “If you look at Pennywise,” he says, “Pennywise does this.”

Skarsgård is, of course, referring to his biggest role to date: Stephen King’s clown creation at the center of the “It” film franchise. As the evil entity known for eating children alive, Skarsgård has taken Pennywise the Dancing Clown—first imagined in King’s 1986 behemoth novel before being brought to the screen by Tim Curry in a campy 1990 miniseries—and morphed him into a truly terrifying being who brings into vivid clarity just how scary circus attire can be.

In case you somehow missed it, “It” premiered in 2017 and quickly became a pop culture phenomenon, grossing $700 million worldwide and breaking the record for the highest-grossing horror film of all time. It inspired Halloween costumes, “Saturday Night Live” spoofs, and a whole new generation of genre fans who will never look at red balloons the same way again.

Skarsgård and his cast—which includes kid co-stars Finn Wolfhard (“Stranger Things”), Jaeden Martell (“Masters of Sex”), Sophia Lillis (“Sharp Objects”), and a standout Jack Dylan Grazer (“Shazam!”), plus their adult counterparts Bill Hader, James McAvoy, Jessica Chastain, and James Ransone, respectively—are hoping to catch lightning in a bottle once more this September with “It Chapter Two.” Picking up 27 years after the first film and Pennywise’s apparent—but temporary—defeat at the hands of the Losers Club, the film is another chance for Skarsgård to showcase the impressive physicality and personality he brought to Round 1.

Just minutes into a conversation with the actor—and after that performance of a 5-year-old running—it’s clear his calculated character work is thanks to a keen sense of observation. Take the Swede’s analysis of Scandinavian cities, for instance: His hometown of Stockholm is not as laid-back as Copenhagen, which by comparison feels more European. Having been raised in Sweden to a family of acting royalty—Stellan Skarsgård (an Emmy nominee this year for “Chernobyl”) is his father and Alexander Skarsgård (Emmy winner for “Big Little Lies”) is his brother—he recalls his people as more serious, the type to follow rules and structure.

His observations let him steal tangible details and tics from strangers, friends, family, and cultures, pulling them into the people (and, in the case of “It,” evil entities) he plays.

“Sometimes I even do it subconsciously, where I do something in a scene and I’m like, Wait a minute, that’s the guy from the subway. I saw this guy and I thought he was weird. Now I just did it in a scene,” he says, getting excited. “I fucking love when it happens so much because it’s literally happening in the moment.”

He’s not Method in his acting, but Skarsgård’s approach certainly feels all-encompassing. He has the capacity to go so deep that he makes it a point to draw clear boundaries for himself; during the audition process, he consciously avoids getting too attached to the role, limiting his prep work to memorizing the sides and making a strong, well-thought-out choice about the character he’s playing. 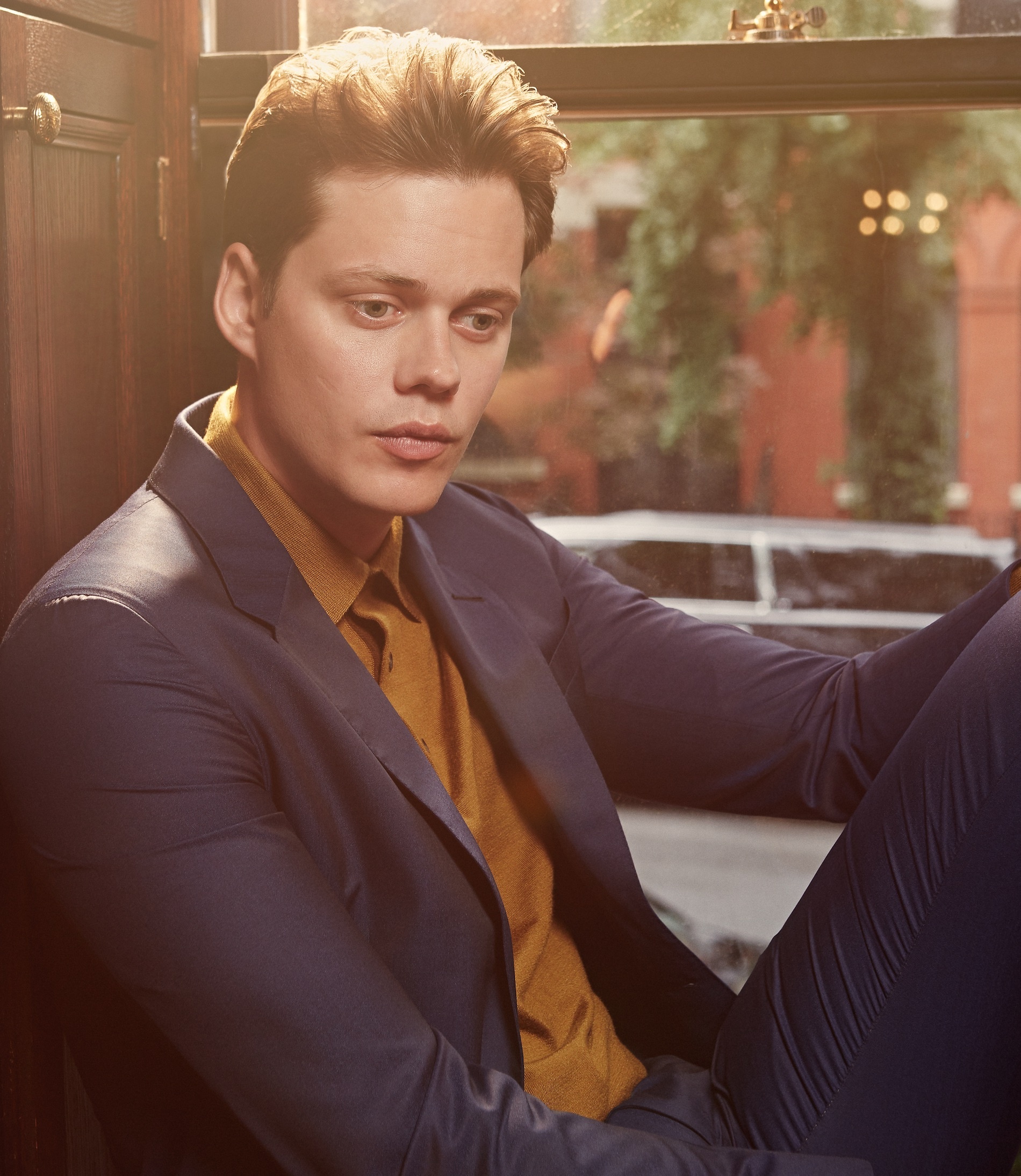 “You can prepare as much as you want—prepare in terms of the scene or think about the character, but the research I put into a role is emotional, especially if I have a book to read about it,” he says. “The ‘It’ book is a really particular one, but usually, [if] you read about the character, delving much deeper into who [they are], you start getting emotionally attached. You can get emotionally attached to a character without doing much research at all. It’s just shitty when you don’t book it.... For me, when I book it is when I let myself go [and] really feel safe to emotionally give so much of myself to it.”

His wariness is understandable when you look at his résumé. Life for any actor naturally ebbs and flows between bookings and rejections, but that’s amplified for an actor like Skarsgård, who has built a career on playing brooding types often living in dire circumstances. His breakout role stateside was as vampire Roman Godfrey on Netflix’s “Hemlock Grove” before going on to play a character in the third installment of the postapocalyptic “Divergent” series and then a mysterious inmate who’s been theorized to be the actual devil in another Stephen King–inspired screen project, “Castle Rock.” It’s not exactly light fare, and diving into those psyches unnecessarily could become detrimental.

“I like living by [the motto] ‘It is what it is’; you adapt and you’re spontaneous and you change things,” Skarsgård says when asked if he adheres to any specific technique to capture the characters he plays. “My life is not very structured or organized to begin with, and that obviously bleeds into the work that I do.”

It’s the spontaneity of his choices onscreen, too, that makes the 29-year-old so fun to watch, particularly as Pennywise. Two of his contributions to the final incarnation of Pennywise’s appearance include the cartoonishly pointed bottom lip—a thing Skarsgård can really do with his mouth, something he says he’s never seen anyone other than his family members do—and Pennywise’s walleyed stare, in which one of his pupils wanders off to the side while the other stays firmly focused on you.

Physically, the role is demanding, requiring him to yell, shake, and contort his face in ways that leave him exhausted; that’s not to mention the hours spent sitting in hair and makeup. “You have glue all over your face; there’s paint. Your hair is up in [a skullcap]—it’s itching. There’s, like, a foam head on top of it.” To put it mildly, “It” and its sequel are unlike any of Skarsgård’s other acting experiences. For myriad reasons, it lacked the give and take of more traditional projects. He had to be at “150 percent intensity” whenever the camera was on him. “A lot of the stuff I do sometimes is literally like”—he makes a gurgling sound like a chainsaw underwater. “It’s like one big jump scare, charging the camera screaming and shaking my head violently. There’s never a scene where you’re just chilling.”

The final product is an amalgamation of script work, Skarsgård’s own imagination, and King’s classic novel, which he leaned on more than usual since the script, told from the perspective of the film’s child leads, necessarily left out Pennywise’s perspective. He also used YouTube to watch videos of mimes, hyenas, baboons, and monkeys, using elements from each to piece together the way Pennywise moves through space.

With all the information he’s gathered from his prep process at his fingertips, the on-set experience becomes about playing to the truth of the scene and the “essence of what the character is at that point.”

“You completely intellectualize the character,” he explains about the early stages of figuring out the person he’s playing. “Who is this guy psychologically? Why is he acting this way? What is his relationship with the world and the people closest to him? The way I do it is objectively going out and studying him separately from me. Observing him, judging him, understanding him, and sympathizing with him.”

He admits to developing a fondness for Pennywise, who refused to vacate his mental premises even after the film wrapped. “You go with a character and you think about that character obsessively for a very long time, and then overnight there’s nothing left to think about,” he says. The uncoupling manifested itself in his dreams, where he sometimes was Pennywise and sometimes was talking to Pennywise, upset that he was somewhere he wasn’t supposed to be. “And then I wake up and I’m like, that was kind of sweet.” It’s the kind of affection only an actor who has lovingly pieced together a character over four years can have for something so objectively sinister.

But no matter the role—or its wickedness—we relish the moment Skarsgård stands up to show us what he’s found today.

Ready to get to work? Check out Backstage’s horror film listings!

Briana Rodriguez
Briana is the Editor-in-Chief at Backstage. She oversees editorial operations and covers all things film and television. She's interested in stories about the creative process as experienced by women, people of color, and other marginalized communities. You can find her on Twitter @brirodriguez and on Instagram @thebrianarodriguez
END_OF_DOCUMENT_TOKEN_TO_BE_REPLACED