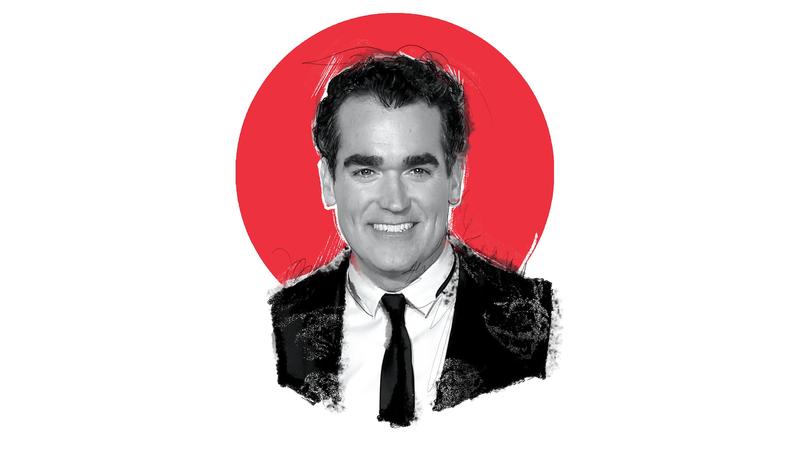 Actors don’t come much more well-rounded—or in-demand—than Brian d’Arcy James. A longtime actor of the stage and screen, his feature film breakout came in 2015 with the Oscar-winning “Spotlight,” and he’s since been a stalwart supporter in projects as varied as “First Man,” Netflix’s “13 Reasons Why,” and the upcoming “Dark Phoenix.” Currently, the three-time Tony nominee is back on the Broadway boards in acclaimed West End transfer of “The Ferryman.”

What has taking over the role of Quinn Carney in “The Ferryman” added to your acting skills?
I think the first thing that comes to mind is a basic answer, I suppose, but I’m reminded just immediately of the text of this play and just how extraordinary it is. With Jez Butterworth, there is kind of an endless exploration that can occur with how he’s constructed this particular play. So for me, as an actor, it’s a good reminder that the work is never really done, trying to figure out the function of the actor and the function of the character within the context of what a playwright has built overall. That’s one thing that I’ve come to really appreciate about my job as an actor within this particular play, just because I think the writing is so extraordinary.

READ: How This ‘Ferryman’ Actor Wrangles Live Animals + a Broadway Performance at the Same Time

How did you get your Equity Card?
I’ll start with Equity. I did a production of “Hair” in 1988 in Chicago. It was born out of a production of “Hair” that I did at Northwestern University. Michael Butler, the original producer of “Hair,” happened to live in Oak Brook, Illinois, and was thinking about remounting a 20th anniversary production and happened to see the Northwestern production that I was in in my sophomore year of college. And he said, “I want to use that production, the set design, the direction,” and he basically picked that college production up, kind of the bones of it, and remounted it. All of the students who were in the show had the chance to reaudition for the professional production, and I was cast as Claude. That started my Equity professional career in Chicago.

How did you get your first agent?
I’ll start in New York. It was a woman that I met at an open call for a production of “Grease.” I didn’t have an agent yet, I was just going to open calls, and we were paired up to read for a couple of the roles. We’re just chatting, and she asked who my agent was and I said I didn’t have one and she said, “Well you have to meet my agent.” That agency is called Fifi Oscard, and a guy named Francis Del Duca was her agent’s name. I didn’t have any luck with agents at that point, so I just kind of crumpled up the number and put it in my pocket and thought, Yeah, sure, I’ll call your agent, I’m sure they’ll be happy to hear from me. And then about three weeks later, I found this little piece of paper in my pocket and I said, “What the hell, I’ll call.” And sure enough, they said, “We heard all about you, we were waiting for you to call.” I’m embarrassed to say that I can’t remember who that angel was that kind of paved the way toward that, but I went in and I met them and started working with them.

What is your worst audition horror story?
I’ve got so many. One that comes to mind is auditioning for a play that Spike Lee was going to direct. It never came to be, but he was going to direct a Broadway play, and I think it was a war, in the ’40s, maybe World War II, and I was in the middle of a scene and my cell phone went off. I was very embarrassed. I had to stop and say, “I apologize, let me turn my phone off.” And Spike Lee said, “If you were on my set, you’d have to pay $100 if your phone goes off. There’s a rule on my set that if anyone’s phone goes off, you have to pay $100.” And I said, “I’ll tell you what, Mr. Lee, I’ll give you whatever I have in my wallet right now.” Thankfully, he said, “That’s OK, you can keep it. Just turn your phone off.”

That’s probably just charming enough that he forgave you for it.
Well, I didn’t get the part so you can decide.

What’s your go-to audition song?
Starting off, there were a couple of go-tos that I would sing that I felt comfortable doing. Now it’s more tailor-made for the project; typically, I will sing something from the show if that’s what’s happening. But, yeah, there were a couple. For better or for worse, I relied quite heavily on “Ain’t Misbehavin’ ” quite a bit in my early days, just because I loved singing it. I still contend that even if it’s not the perfect song for the occasion, you’re probably better off singing something that makes you feel confident and makes you feel like you understand exactly what you’re singing and how to sing it. If it makes you feel a particular way, that is going to be just as helpful in communicating something to your future employer.

What’s the craziest thing you’ve ever done for a role?
I got a nice part in a movie called “First Man” directed by Damien Chazelle. I am a huge fan of Damien Chazelle, and I wanted to do everything I could to get in this movie. They were having a hard time envisioning me for a particular part [as one of] of the M15 pilots. I was doing “Dark Phoenix” at the time, and I talked to the costumer there and I said, “Hey, do you happen to have, like, an Air Force jumpsuit that I can borrow?” And sure enough they had all kinds of things. So I basically got a costume and then I talked to my friend David Turner, who is an actor who happens to be a pilot, and I asked him if I could use his plane to do a little photo shoot of me dressed as an Air Force pilot. Long story short, he was able to help me get a friend of his who owns an airport and who strangely also happens to be a semiprofessional photographer to take a little bit of his day and do a makeshift photo shoot of me standing next to a plane in a fighter pilot costume so I could just show them. “Look, if you’re having a hard time envisioning what I would look like, let me show you.” And it worked! Who knows, they may have made up their minds before they saw those photos, but I just felt like I had the idea and I thought, If I can pull this off, then I’ll do it—there’s probably no chance that I’ll be able to pull it off. But kind of miraculously, I had everything I needed right at my disposal. I thought, I have to do this now, so I did and was able to be on the set and working with the great Damien Chazelle.

If you could pinpoint what your big break was, what would it be and who was the casting director?
It depends on how you define “big break.” There was a break for me that was really important for me. I was doing “Carousel” at the time, and I had just done “Blood Brothers,” and I had two big musicals under my belt and I really wanted to try to be in a play because I wanted to do plays as much as I wanted to do musicals. I auditioned for a play called “Public Enemy,” which was at the Irish Arts Center and written by Kenneth Branagh—of all things, another Northern Irish play. And Laura Richin was the casting director on that, and I’ll never forget what she said: “Sometimes musical theater performers can be pigeonholed.” But she contended that people who are musical have a great understanding of rhythm, a great understanding of dialect, they can just hear things in a way. And she allowed me to come in and audition and get that play that I wanted to do. At least I had one little feather in the cap that made me feel OK. It was something to build on. And it was an extraordinary experience. So Laura Richin was the casting director who gave me that shot, and I’m forever grateful for that.

What advice would you give your younger self?
If you have thoughts or impulses to find ways to explore other talents like writing or producing or directing, start exercising those options sooner rather than later, because those are talents that take time to develop, and I find myself in a place where I’m very curious about doing just that. I think if I had been more brave in exploring those things earlier, I would have a stronger sense of my own ability and my own confidence, and that, I think, is a thing that can serve people well, because it’s easy to think that this is what I do and this is the lane I’m going to stay in. Sometimes that’s wise in the sense that you can strengthen your abilities by focusing on one thing, but if you do have an impulse to do other things in any capacity in the arts, I would advise you to be more bullish in exploring those and not be afraid of seeing where it takes you.

This story originally appeared in the May 9 issue of Backstage Magazine. Subscribe here!

Benjamin Lindsay
Benjamin Lindsay is managing editor at Backstage, where if you’re reading it in our magazine, he’s written or edited it first. He’s also producer and host of a number of our digital interview series, including our inaugural on-camera segment, Backstage Live.
END_OF_DOCUMENT_TOKEN_TO_BE_REPLACED