On his career, Murphy says, “It’s the closest you can come to walking out of heaven and into Hollywood.”

How many actors can say they’ve only had to land one audition ever?

“That’s got to be some kind of record,” says Eddie Murphy, who at age 18 booked a career-launching gig on “Saturday Night Live,” then, at 20, earned a Golden Globe nomination for his film debut. As he readily admits, “It’s the closest you can come to walking out of heaven and into Hollywood.” 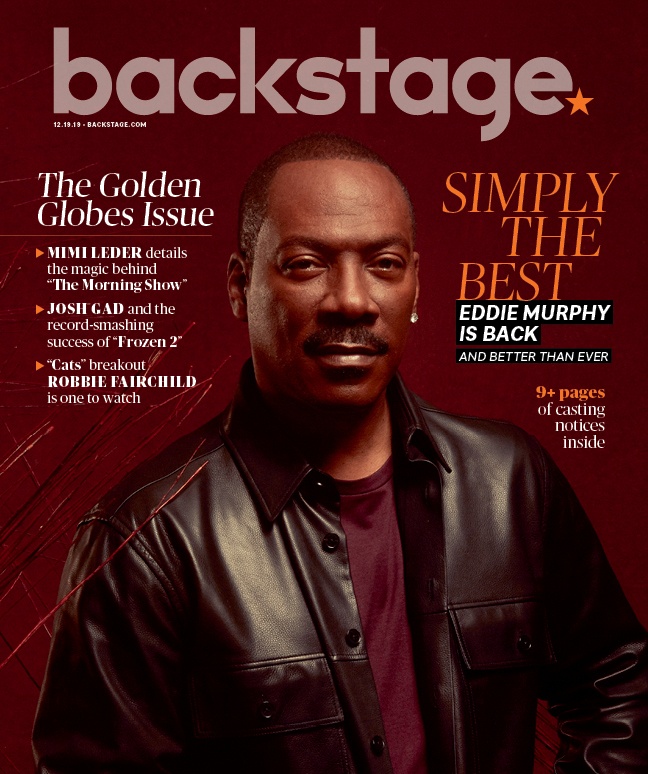 Chatting at the Four Seasons hotel in Midtown Manhattan, Murphy is thoughtful and wry at just above a whisper—when he’s not launching into a hilarious bit. Maybe it’s because the Brooklyn native is now 58, having worked consistently as a comedian-singer-actor for exactly four decades, that he’s looking back at his unlikely success in quiet awe. “I feel grateful, and I know that this is rare. The way everything in my life happened? On paper, it could never happen.” He cites his favorite statistic: The odds of each of us being born, factoring in the probabilities of ancestors meeting and the many combinations of DNA, are apparently 1 in 400 trillion.

“Everybody you look at, even the bum in the street, is a walking miracle!” he exclaims. “Now, to get here and to make something of your life and connect with other human beings and find who you are and get a career—each thing that you do, the odds are slimmer and slimmer. What are the chances of becoming a fucking actor? And to become an actor who becomes known globally… That’s a super rare thing.

Murphy is one of those prolific artists whose career has lasted so long it must be categorized in multiple arcs: an explosion onto the comedy scene with “SNL” and his subsequent leather-clad standup specials “Delirious” and “Raw”; leading blockbuster films (“48 Hrs.,” “Trading Places,” “Beverly Hills Cop,” “Coming to America”) and supposed duds (“Vampire in Brooklyn,” “The Adventures of Pluto Nash,” “Norbit”); and a family-friendly era (“Mulan,” “Doctor Dolittle,” the “Shrek” franchise). He’s also sung as a solo recording artist, and his electric vocals in the “Dreamgirls” movie musical earned him an Oscar nod.

And in 40 years, just the one audition. He’d forgive you for counting the time he had to put himself on tape, though. In pitching his 1996 remake of “The Nutty Professor,” Murphy wanted to again play multiple supporting roles in different makeup, an homage to his idol Peter Sellers. Studio heads were not convinced. “I think I had a couple movies that had flopped before that, and the studio was like, ‘Should we get somebody to play all these characters?’ ” he remembers. “But I saw it this way. To get the studio to see it, I did makeup tests where I got Rick Baker to make me up as all those characters and put it on video and send it to the studio. They said, ‘OK, we get it.’ ”

READ: Oscar Winner Ruth E. Carter Reveals How to Make Sure You’re Wearing Your Costumes (+ They Aren’t Wearing You) 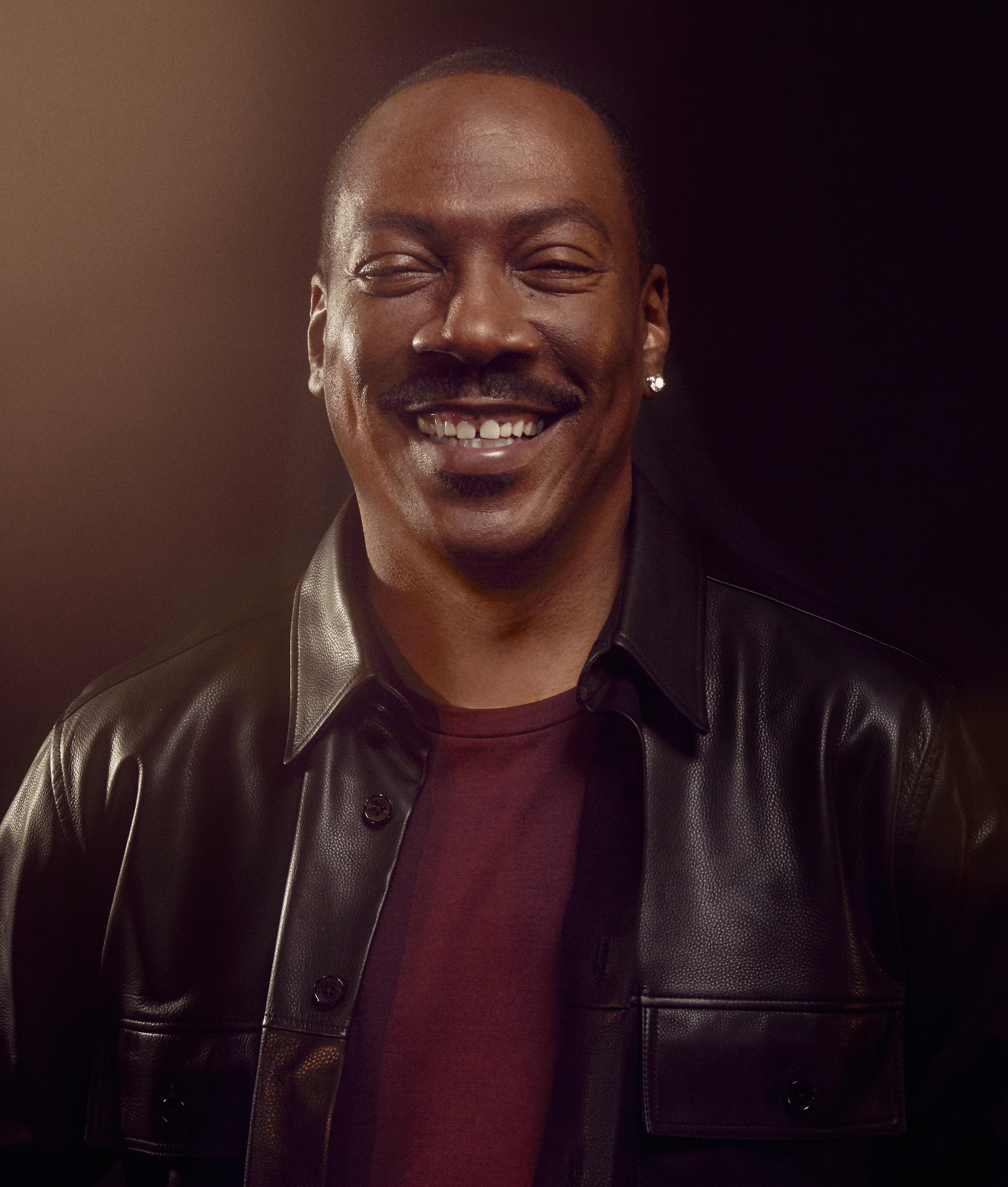 Pitching a pipe dream to the powers that be feels reminiscent of Murphy’s grand return to the screen as Rudy Ray Moore in Netflix’s “Dolemite Is My Name.” Directed by Craig Brewer with a script from Scott Alexander and Larry Karaszewski and co-starring Tituss Burgess, Keegan-Michael Key, Da’Vine Joy Randolph, and Wesley Snipes, the film tells the stranger-than-fiction tale of how Moore’s 1975 blaxploitation classic “Dolemite” became Hollywood’s unlikeliest cult smash. Moore’s rhythmic profanity as the kung fu–wielding pimp Dolemite, which he developed from an old oral tradition, eventually led to him being recognized as the “Godfather of Rap.” (Snoop Dogg, who makes a cameo in the film, has said, “Without Rudy Ray Moore, there would be no Snoop Dogg, and that’s for real.”)

Murphy, whose performance in the film just secured him his sixth Golden Globe nomination, portrays Moore as a talent with a vision so raunchy, ridiculous, and unconventional that few others can see it. “He doesn’t have the good looks or the charm or any of that stuff that people associate with being in the movies,” explains Murphy. “But he wants it all. And he believes in himself. And that’s his biggest talent: belief in himself. He is relatable to anybody who was a dreamer at some time in their life.”

“Dolemite Is My Name” is not only Murphy’s first movie since 2016’s modest indie “Mr. Church,” it seems to be part of a shift back into the spotlight—or, as he’s put it, off the couch. Earlier this year, he made a much-buzzed-about appearance on Jerry Seinfeld’s “Comedians in Cars Getting Coffee.” Now, “Dolemite” has him in the throes of a full-blown awards campaign. Plus, the long-awaited sequel “Coming 2 America,” also directed by Brewer, will arrive in 2020; another “Beverly Hills Cop” is in the works; and this very Saturday, Dec. 21, the actor comes home to “SNL” to host for the first time in 35 years. (“There will be Gumby,” he guesses. “What else did I do? Buckwheat! James Brown…. Who’s the other one? Velvet Jones.”)

He’s also—finally!—readying a big return to standup. Murphy’s forthcoming Netflix special will mark his first in decades, a prospect that feels simultaneously like flexing muscle memory and starting from scratch. “The way I come up with my stuff has always been: I’m having a conversation with a bunch of people and somebody says something, and I’ll say something funny. That’s how everything comes, just talking.” Recently, he’s been repeating those bits into a tape recorder. “I have a bunch of little things that if you listen to them by themselves you’re like, ‘Doesn’t sound like jokes!’ Like, ‘mayonnaise and ice cream,’ whatever I’m talking about.”

(Soon enough, we see that process in action: “ ‘Assouline,’ what is that?,” he asks, pointing to a coffee table book. “That sounds like gasoline for your ass.” There are chuckles from the team of assistants and publicists hovering nearby. He keeps riffing on the publisher’s name until they become belly laughs. “Or some cream that you put on, Assouline. Sounds like what a black person would put on their ashy ass. ‘I need some Assouline, I’m ashy.’ ”) 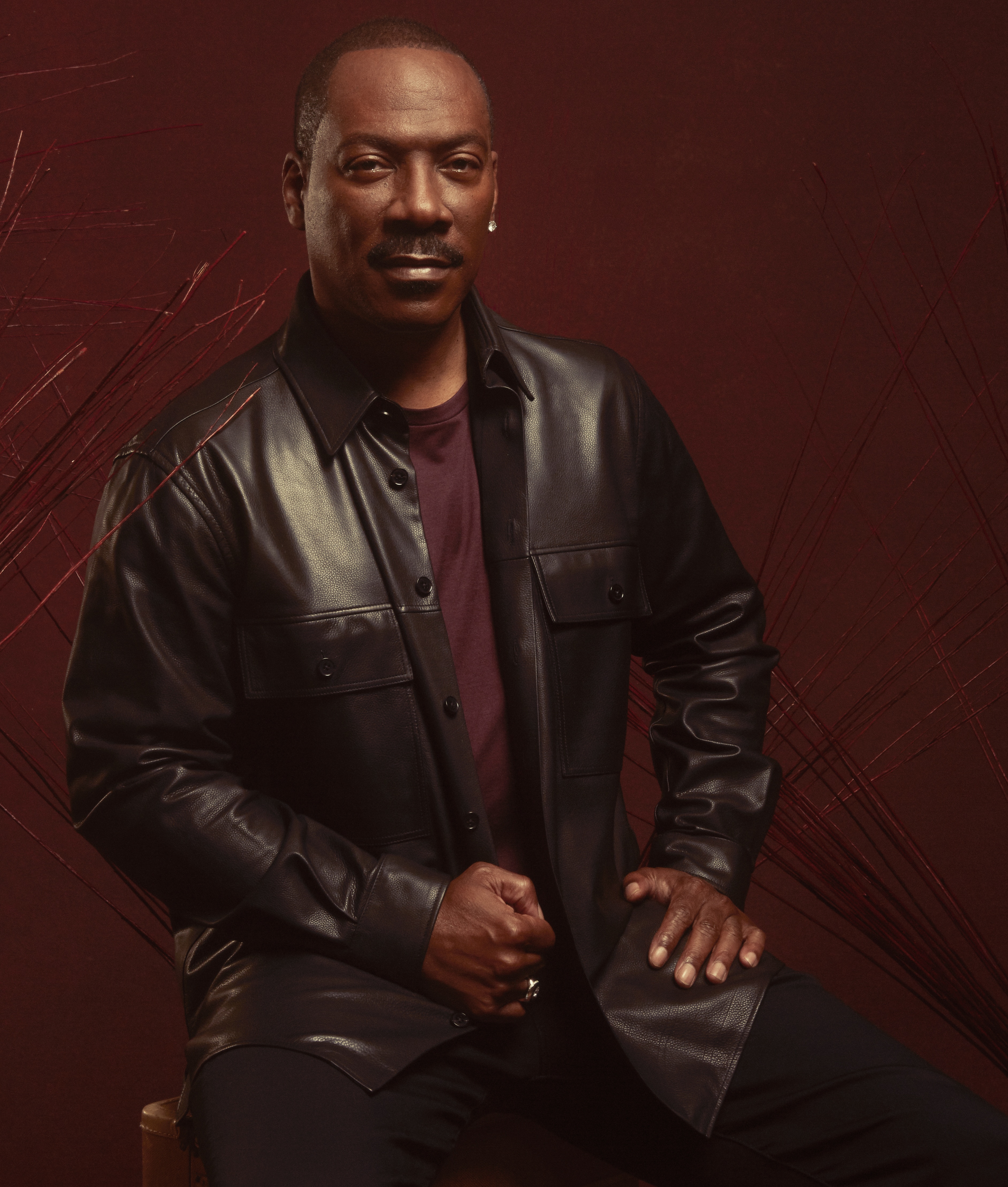 And what about achieving the preternatural confidence he exudes onstage? Doesn’t he ever get nervous? “Nah,” he says. “I get an excited feeling: Oh, I want this to be good. I think nervous is a negative. Whatever process I have is a constructive one. I think thoughts like, I want to go out there and crush it, how do I crush it? Not, Are they going to laugh? What could go wrong? Am I going to offend somebody?

“All I’m doing is getting on the stage and being who I’ve always been, you know?” Which is not to say you’ll see him in 2020 wearing a “Raw”-esque leather outfit. He barely recognizes that person. “I’m 58,” says Murphy flatly. “What’s the thing they say in ‘Star Wars’? It’s a galaxy far, far away. That’s who that guy is. You can’t wear leather at 58. Well, I mean, you can! But you want to laugh for the right reasons.”

It all begs the question: How can an aspiring comedian or actor dream of lasting this long? To have a career like Murphy’s, with a following that will support your every project, is to defy the very nature of a business as fickle as it is grueling.

Perseverance is key, advises Murphy—in the industry, but also, frankly, in life.

“All of my contemporaries are dead,” he says with a shrug. “All the people who came onto the scene when I did, in music and all that stuff—Prince and Michael [Jackson] and Whitney [Houston], all people around my age, are all gone…. They got shorted. They’re supposed to still be here. But the pressures of this business, the pressures of life, the pressures of the whole thing—a lot of people fold under that.”

Of course, when it comes to surviving this near-impossible industry, it’s Moore who embodies it most. The entertainer had his ups and downs (Murphy remembers meeting him in the early ’80s at what must have been a low point) throughout a mutable career where he heard “no” a lot more often than “yes.” But he kept hustling to bring his projects to fruition; shortly before his death in 2008, at age 81, Moore was still recording songs and playing characters like Petey Wheatstraw and Dolemite. 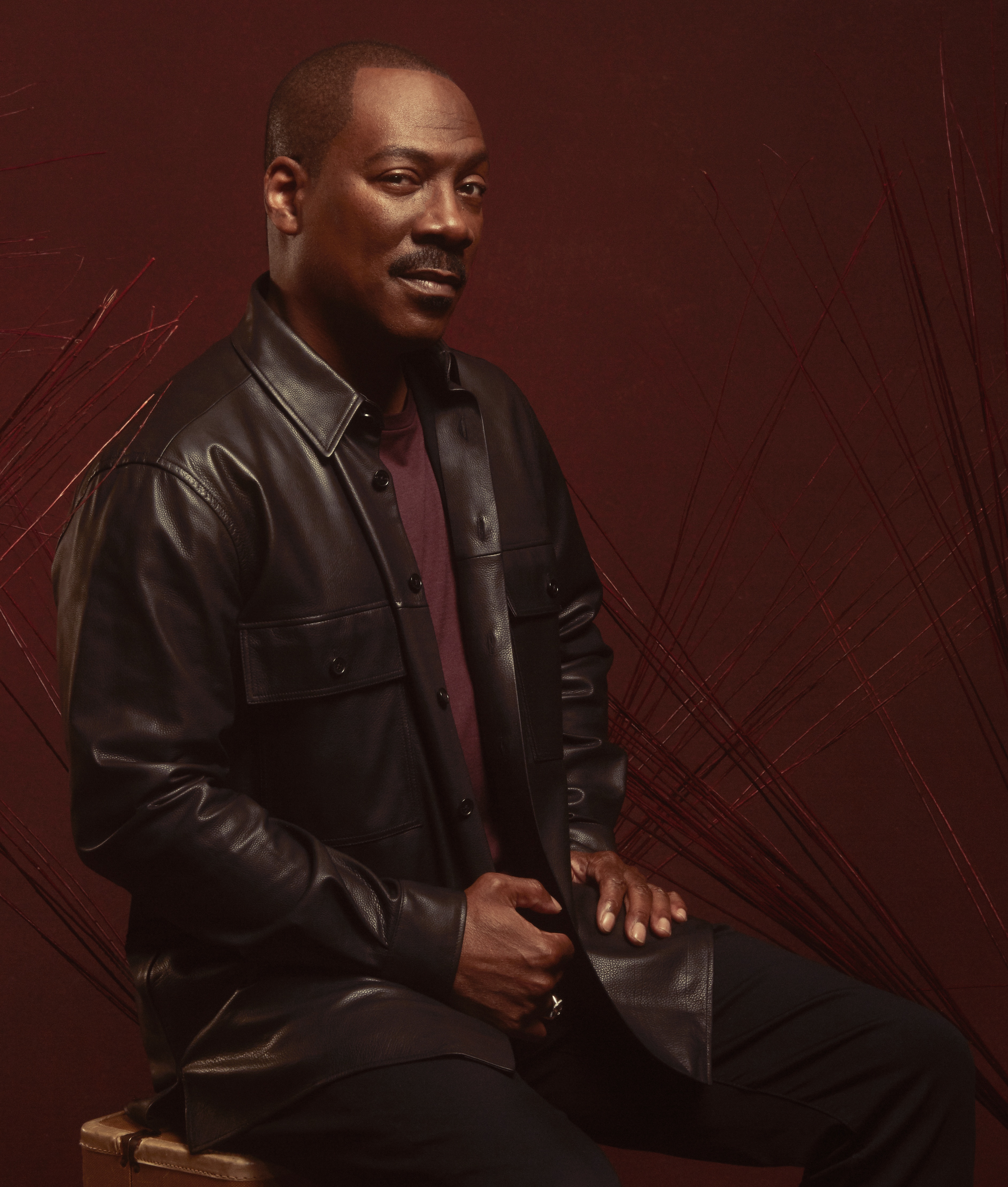 Murphy also points out that for the most part, we’ll never see the blaxploitation genre from the ’70s again. “Rudy Ray Moore’s movies are still in circulation; he has a cult following. And we just made a big Hollywood movie about his life. He was right! Because he believed in his shit, and his volition made it all blow up. None of that stuff happens without him believing in himself.”

It must be said that Murphy channels that belief beautifully onscreen—his kinship with Moore is evident. The moments in “Dolemite Is My Name” when Moore contends with his naysayers are the actor’s most nuanced and poignant work. First with record executives, then with movie studios, and even with many of his collaborators, mental gymnastics play out behind Murphy’s eyes. He realizes they aren’t seeing his vision, brainstorms other strategies for convincing them, decides they can’t be convinced, and rejects them in turn. “A man slam a door in my face, I just find another door,” his Moore announces, already moving on to a new plan. You see Murphy turning frustration into determination, that refusal to give up becoming unexpectedly inspirational. (Before the credits roll, you may even choke up.)

“Movies, TV shows, records, entertainment—it’s a group of people who come together to do it,” says Murphy. “But you’ve got to have one person at the center of it who believes in it at every stage of development.

“There’s a movie called ‘Attack of the Killer Tomatoes,’ ” he adds, “and ‘Attack of the Killer Donuts,’ and ‘Sharknado.’ You’re flipping through the TV and go, ‘What the fuck is this?’ And, hey, this happened because someone somewhere got this killer tomato shit made.” Everything from Dr. Dre’s “The Chronic” album to the “Twilight” movie series, for example, was rejected by countless producers before someone took the risk. “There’s somebody that stayed on that shit: ‘This vampire shit is gonna work, I believe it.’ ”

Moore had that kind of passion. How many people would invest so heavily in their film’s success that they have to move into a bedroom on set? “Listen, you want this dream? You’ve got to finance it,” Murphy says. “That’s going to scare most people off. You’ve got to put everything on it. You made a little bit of money from that little record? OK, you’ve got to take that and put it all on yourself to win. And you are a fucking long shot.” He laughs. “You look in the mirror and know you are a long shot. But Rudy Ray Moore was unwavering.”

That’s Murphy’s ultimate advice to artists who dare to pursue their vision, no matter how unprecedented or outside the mainstream or improbable the odds. Put your weight on it and don’t waver, in true Rudy Ray Moore fashion.

Photographed by Emily Assiran on Oct. 25 at the Four Seasons in NYC

Jack Smart
Jack Smart is the awards editor at Backstage, where he covers all things Emmy, SAG, Oscar, and Tony Awards. He also produces and hosts Backstage’s awards podcast “In the Envelope” and has interviewed some of the biggest stars of stage and screen.
END_OF_DOCUMENT_TOKEN_TO_BE_REPLACED