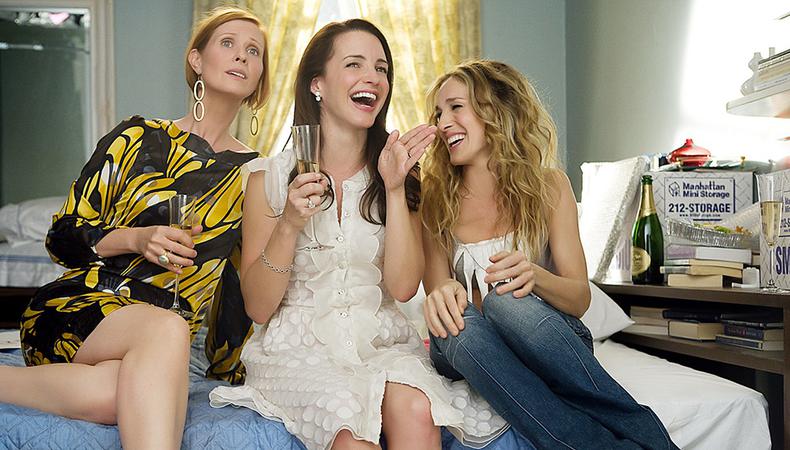 “Sex and the City”
And just like that, “Sex and the City” is back again—officially! As previously rumored, HBO Max is rebooting its hit series with original stars Sarah Jesica Parker, Cynthia Nixon, and Kristin Davis all returning (Kim Cattrall will not be joining the revival.). Over the weekend, the news was confirmed by Variety. The new chapter, titled “And Just Like That…,” will follow Carrie, Charlotte, and Miranda as they navigate love and friendship in their 50s. Production is scheduled to begin in New York City in late spring for 10 half-hour episodes. This marks the most recent title in a string of series reboots for HBO Max, including “Gossip Girl” and “True Blood” revivals which are reportedly in the works. The original “Sex and the City” series casting director was Jennifer McNamara, who is now the senior vice president of casting for NBC. Series creator Darren Star has most recently worked with Chrystie Street Casting on “Emily in Paris” and Finnegan/Jacobs Casting on “Younger.”

“Dexter”
The “Dexter” revival is getting closer and has now found its main villain. Clancy Brown has been cast in the upcoming season as Kurt Caldwell, the unofficial mayor of the small town of Iron Lake. As we previously reported back in October, “Dexter” has been given a 10 episode limited series revival at Showtime with Michael C. Hall returning in the titular role. Little is known about the plot, but former series showrunner Clyde Phillips will return. He plans on acknowledging the original divisive series finale and has said the revival is an “opportunity to write a second finale for our show.” New York-based Tucker/Meyerson Casting is seeking talent to fill out the 10-episode limited series return. Learn more about how to get involved with the revival here at Backstage!

“Men”
First reported by Deadline, Alex Garland will return to A24 for his next feature film, tentatively titled “Men.” Jessie Buckley (“I’m Thinking of Ending Things”) will star opposite Rory Kinnear in the feature, which will follow a young woman who goes on a solo vacation to the English countryside after the death of her ex-husband. Garland, who on the film side previously helmed “Ex Machina” for the studio and most recently helmed the Paramount thriller “Annihilation” in 2018, also wrote the script. Scott Rudin will produce along with Eli Bush and DNA’s Andrew Macdonald and Allon Reich. Francine Maisler is Garland’s usual film casting director, though Carmen Cuba was his CD on the Hulu series “Devs.”

“The Little Mermaid”
“The Undoing” star Noma Dumezweni will become part of the Disney world with a role in the upcoming live-action adaptation of “The Little Mermaid.” The actor joins Halle Bailey, Melissa McCarthy, Javier Bardem, Daveed Diggs, Jacob Tremblay, Awkwafina, Jude Akuwudike, and Jonah Hauer-King in the project, which will be directed by Rob Marshall and is written by David Magee. The film will incorporate original songs from the 1989 animated classic, as well as new tunes from original composer Alan Menken with lyrics by “Hamilton” creator Lin-Manuel Miranda. It is unknown who Dumezweni will be playing other than it will be a brand new role that wasn’t in the animated movie. This is her second project for Disney after previously starring in the studio’s “Mary Poppins Returns.”

“Spamalot”
Look on the bright side of life: Paramount Pictures has reportedly acquired the hit Broadway musical “Spamalot” to adapt into a feature film. “Monty Python” member Eric Idle has written the screenplay, with songs by Idle and John Du Prez. Casey Nicholaw, who was the choreographer of the original Broadway production and has helmed several Broadway musicals since, including “Book of Mormon,” “The Prom,” and “Something Rotten!,” will direct. “Spamalot,” which is an adaptation of “Monty Python and the Holy Grail,” won the Tony for Best Musical, as well as a Tony for director Mike Nichols. Casting for the movie will begin soon and filming will reportedly get underway this year. A casting director has not been announced, but Tara Rubin Casting staffed the stage show.