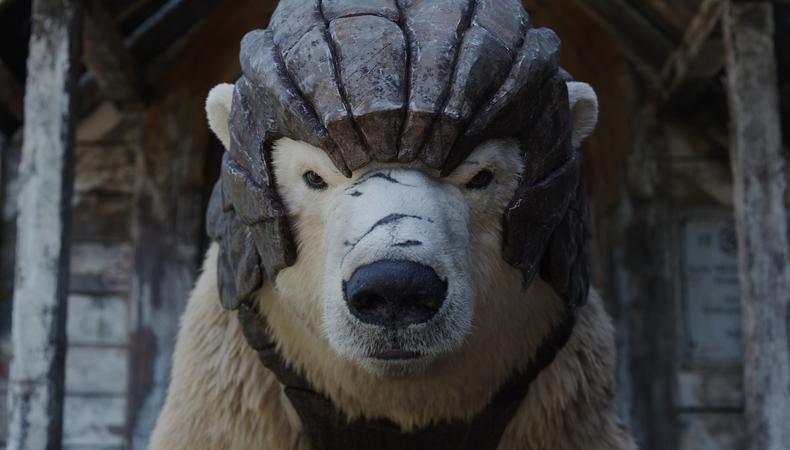 Finding the right actors to portray well-known literary characters onscreen is a challenge, but it’s one HBO met head on while adapting Philip Pullman’s “His Dark Materials” trilogy. The network brought together a stellar cast to portray Lyra (Dafne Keen), Lord Asriel (James McAvoy), Mrs. Coulter (Ruth Wilson), Lee Scoresby (Lin-Manuel Miranda), and many others. But where do you start when it comes to finding the right fit for an armored bear? Iorek Byrnison is one of the most beloved characters in the series, a bear banished from his home who helps Lyra on her quest.

HBO ultimately found its Iorek in Joe Tandberg who at first, just brought his voiceover experience to the character. Soon, though, Tandberg wasn’t just voicing the bear; he was also embodying him on set as an unlikely puppeteer and motion capture performer. Backstage recently spoke with Tandberg to find out more about his voiceover work, how he found his take on Iorek, and the advice he has for others in the field.

How did you get cast in “His Dark Materials”?
The first time I got the script was through my agent. I’d done a couple of voiceover gigs before that. This is so embarrassing, but I hadn’t read the books at that point. They asked me if I wanted to audition for this project, and I read the script and it was unbelievable. You don’t often get scripts like that. I immediately said yes. Then I had a self-tape, and then I was called in and we had another audition and a couple of meetings and so on. When I was offered the part I immediately started reading [the books] like crazy.

You were also on set portraying the character. How did that come about?
I was originally cast to just provide the voice, but we weren’t really sure how we were going to capture Iorek. Did we have the puppeteer just do the puppeteering and I sit next to the camera and do the voice? Or how were we going to go about finding him? In preproduction or in rehearsal, I got to work with the puppeteers and Framestore and [visual effects supervisor] Russell [Dodgson] and the sound guys. It’s not just a voice. It’s movement. There’s a lot more to it. It’s really a full-body performance. We quickly realized if you can capture the presence of Iorek in front of the other actors, it’s so much easier for them to react to.

So I started rehearsing with the Iorek puppet head. We realized we also have to capture my face in terms of facial capture, so I always had a camera mounted on my face and incorporated the movements, the weight distribution, the breathing, and the noises as much of a bear as I could. That’s how we developed. We realized instead of just being a voice and a completely animated character, you have to really dig in and go 100 percent in order for the other actors to have something to react to. Not only that, but it was also in terms of the story, you have to develop these beautiful relationships with the other actors or the audience isn’t going to buy what’s going on. So it went from being 11 days to being a lot longer.

How did what you were wearing change your performance as it all came together?
It depended on the shot. When we had a medium shot to a long shot I would have the puppet head and basically, my arms would be the neck of Iorek, my shoulders would be Iorek’s shoulders, and my legs would be the front paws. So in medium and long shots, I would use the head for the animators and other actors to have the size and presence of him. I would act the scene like you normally would, and then on the close-ups I would lose the head most of the time and I would perform right to their eyes. So all of the really connected moments, the personal moments, those are eye-contact to eye-contact moments. I still had the dots on and the face camera, but I went full bear with my face versus just the puppet head. That’s how we went about it. You were always getting the snarling and the spitting and growling and all that kind of stuff no matter what kind of shot it was.

Did it impact how you settled on his voice?
In the beginning, I would often be told by the sound guys after a take, “Can you dial back the bear sounds a bit because you’re making a lot of bear sounds right now.” I’m like OK, I got you. It was a little bit more structured when we were on set obviously because you have to allow for the other actors to speak, as well. It happened naturally because when you’re there you’re feeling whatever he’s feeling and whatever he’s going through and you incorporate the sounds and the movement into it. So his voice started basically how it ended up. That was something we worked on in rehearsal before we went out and filmed it. But I wasn’t allowed to do the voice in front of any other actor until the first day of filming.

How does this experience compare to your previous voiceover work?
First of all, this character is so beloved in literature and portraying something that a lot of people love can be quite daunting and terrifying. I tried not to think about that too much, but occasionally you have to pinch yourself and be like, “Am I doing the right thing?” Or “Why am I here?” So that is definitely one of the biggest differences from video games. I’ve done motion capture in video games, as well, and facial capture. Usually, you’re in a room in a comfortable studio and half the time you get the opportunity to learn the lines before. Sometimes you don’t have the time to learn the lines. So it’s a completely different process because here you’re out in the elements. You’re not on a giant set that is built for the sole purpose of this world. You’re out in Wales, and so the weather definitely changes things. Especially when you look at Trollesund, when you’re walking in the mud and you’re feeling the wind, this world lives and breathes these characters. You definitely feel that, and it helps so much. It’s insane how much that changes the performance.

How did you originally get into voiceover?
It was really by accident. I’m a theatrically trained actor. I thought I was going to be a theatrical actor for the rest of my career, but when I was still in acting school, my agent sent me a brief and asked if I wanted to audition for a video game. I’d never done it before, so I thought it was a great challenge. I auditioned for it and I got the part and it kind of just went on from there. The video game industry is so big, but a lot of people work around the same studio and there’s another project going on in the booth next door so you can pop your head in and introduce yourself and suddenly they ask you to audition for another voice. I guess it started by accident—an opportunity that somebody gave me to audition for and then I took it and after that, it snowballed.

What advice would you give aspiring voice actors?
If you have a background in theater or been in theater before, you treat the performance as you would in the theater. People think it’s so relaxing and easy to do, but it requires a lot of work. You have to trust your voice and your instincts. You have to warm up properly and you have to be familiar with text. You have to be good at reading text and have to understand how to get text off the paper. But I think the most important thing is to treat it like a real performance. Don’t go in there and think that it’s just your normal voice and it’s just you giving your voice. Treat it like a real performance.

Ready to find your next adventure? Check out Backstage’s voiceover audition listings!