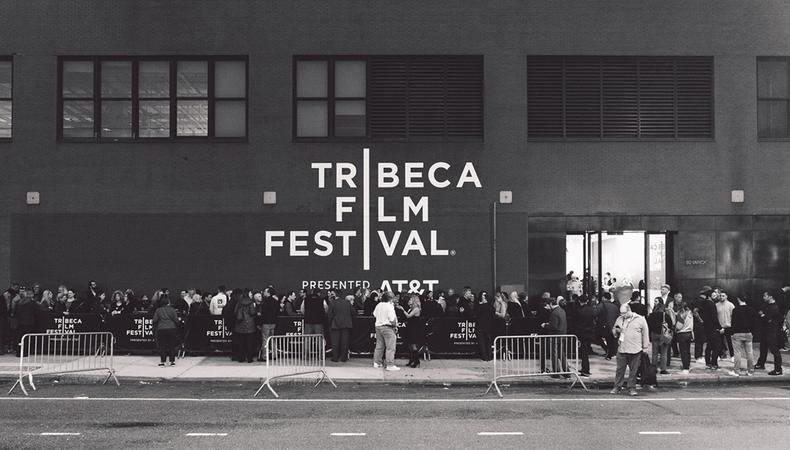 A filmmaker’s goals can range anywhere from finishing an outline for a script to winning an Academy Award, and there are plenty of milestones to hit on that long spectrum of accomplishments. One could be finishing a project and yet another is getting that finished project into a film festival. For filmmakers in new media particularly, that’s where Tribeca Film Festival’s New Online Work (N.O.W.) program comes in. It’s a part of the festival that features work from independent filmmakers who share their projects online. For some, it’s their first completed project since graduating from college and for others they’ve moved to the digital space from more traditional filmmaking platforms. What they have in common is a story to tell and a finished product to show for it, plus some advice for those aspiring filmmakers looking to launch their own projects.

Why did you choose to create and share your work in the online space?
Nick Borenstein (“99” and “Sweater”): I want my films to connect with as many people as possible. The dream is that people all over the world can connect, laugh, cry, and maybe even dance in response to these movies. Because the internet is so vast and accessible, it’s a great place for discovery to a wider audience.
Valerie Bisscheroux and Maud Wiemeijer (“Anne+”): We wanted to be able to reach as many people as possible. Our generation spends a lot of time online, so this is where our target audience was, especially if we’re talking about LGBTQ+ people and content. Also, this was our first big project so we were thinking about feasibility. We do believe the future of series is online; just look at Netflix and the amount of web series there are on YouTube and Vimeo.

What are you most proud of about the finished product?
Matt Dellapina (“Adult Ed.”): I'm most proud of the performances the actors brought. The caliber of actors, from Campbell Scott to MacKenzie Meehan, was already high to start, but it feels like the freedom to play in what is essentially a big online experiment elicited some surprising and hilarious choices.
Nabeel Muscatwalla and Adam Turkel (“Better Days”): We worked hard on creating a cohesive tone through the series. The episodes work as bite-sized vignettes on their own, but seeing how you can watch all five in under a half hour, we wanted to make sure we were telling a story that was visually and thematically consistent all together.

How did your project go from an idea to a finished story?
Alix Lambert (“Obits”): I love the obituaries. I read them every day. I like to think about the details of people’s lives. I started noticing the similarities and differences in the lives of people who died on the same day.  Mostly, I talked to anyone who would listen about the idea. The good people at Topic made the introduction between me and Manual Cinema, and from there it was a process of trying things and seeing what worked.
Sara Salovaara (“The Future is Then”): “The Future is Then” had been gestating for quite some time. I was first inspired to write the story when I met a woman, Orleane Williams-Brooks, about five years ago. Orleane runs a travel agency in Crown Heights, Brooklyn, where the series was shot, and I was interested in her and the business’s perseverance in the face of the dot com boom and the neighborhood’s gentrification. My writing process usually involves some combination of my personal experience and larger ideas or themes I’m interested in tackling. For“The Future is Then,” I created a character study of a woman, Glenda, who is very loosely based on Orleane, and fused it with a satire of the tech industry and white entitlement.

READ: The Industry Insider’s Guide to the 2019 Tribeca Film Festival

What most surprised you about making and finishing this project?
Valerie Bisscheroux and Maud Wiemeijer: It surprised us how web series are often seen as low budget and low in quality with superficial storylines. We see web as a platform, not a measure for quality.
Joe Pena (“Release”): While writing, the tendency is always to say too much, explain it all away, and provide rock-solid reasons for every decision. While editing and screening to the people you trust, it’s always surprising to me just how much a smart audience can infer. Our edit process gave us the chance to reinject subtlety into the project by stripping away layers of exposition and trusting our viewers to participate in the storytelling.

How is creating work for a digital platform different from what you’d have to do for something more “traditional.”
Nabeel Muscatwalla and Adam Turkel: The production process itself doesn’t necessarily have to change when shifting to a digital platform. That said, there are certain conventions within “traditional” television writing, particularly in comedies, that don’t really make sense in an online format. We found it freeing to be able to pick and choose which of these “rules” we wanted to adhere to based on our vision for the series.
Nick Borenstein: Creating digital work is incredibly freeing. There’s a lot more experimentation because there aren’t any rules. Plus, it’s cheaper and allows filmmakers to make work without the constraints of needing a financier, network, or studio. Creating films for a digital platform allows filmmakers to make work rather than talk about making work.
Sara Salovaara: The episodic structure allows you to skirt around exposition and the sort of necessary connective tissue you might have between scenes in a feature or short film. You can also veer off script and leave the main narrative as you choose. I pushed myself to experiment with this by creating an episode that is all about one of the white male character’s baseless perceptions of Glenda, and how he tries to shoehorn her life into his own experience. I always think back to the B.A.N. episode of “Atlanta,” which really inspires me to push the structural limits of the form.
Nick Kocher (“neurotica.”): There’s absolutely no advantage to playing it safe. You don’t have any kind of built-in audience so there’s no one you could possibly turn off, only potential people you could attract in, so you might as well do the weird stuff you want to.

What are the benefits of sharing your work in the digital space?
Micaela Birmingham (“MotherStruck”): The digital space is flexible and a piece of work can evolve over time. A series that starts with 10-minute episodes could live on as a longer form piece with extensions across multiple platforms like VR, OTT etc.
Valerie Bisscheroux and Maud Wiemeijer: We have a growing fan base. Via our channels, we are in direct content with our target audience. We get instant quality feedback by the viewers in comments they post and we can react to them. Also we have insight in data which gives us demographic and geographic information and informs us about the tension arc of the viewers within scenes or episodes.
Alix Lambert: I think you reach a different audience in the digital space. For a project like “Obits,” it also seems appropriate. Watching online more closely mimics reading the obituaries in a physical newspaper or reading news online.

What advice do you have for new and up and coming filmmakers who are setting out to make their own projects?
Andrew Huang (“Kiss of the Rabbit God”): Be patient, kind, trusting, and generous to your collaborators, and be bold and tenacious in your vision. Make something good and then market the hell out of it.
Matt Dellapina: Don’t let a lack of money stop you. Sean Lewis and I made our feature film, “These Hopeless Savages,” for $5,000 and we shot it in one single week out of a Ford Focus with a core crew of three.
Robin Cloud (Passing: A Family in Black & White”): You must love your story more than anyone else. Stay true to who you are as an artist and what you are trying to say. Don’t let the potential of big studio money tempt you into sacrificing your vision.

What skills and experiences can help aspiring filmmakers complete a project?
Nick Kocher: Start learning to finish literally anything. Finish a three mile run. Finish reading a book. Finish assembling a jigsaw puzzle. Train your body to see things through to the end and you’ll be better equipped to overcome the countless obstacles along the way.
Robin Cloud: Organization and hiring for your weakness. I have ideas and vision, I need people who can help me bring them to life. Without my producer, Anne Carkeet, keeping us on schedule, organizing every detail and work schedule, this would never have gotten finished. She’s good at something that I’m not great at and my best move was to hire her to whip me into shape.
Micaela Birmingham: Tenacity, a deep network of random phone contacts, and never taking no for an answer.
Sara Salovaara: I am a big proponent of learning by doing. I didn’t go to film school so I crewed on sets and tried to make as much stuff as I could at small scales. I’m also one for a holistic understanding of the entire process. I understand production, I know my way around a camera, I’m an editor, I’ve acted—all of these skills help me to show up and do my job the best way that I can.

What is something people don’t know or realize about making an indie film or tv project?
Nabeel Muscatwalla and Adam Turkel: Can’t say we’re experts on the industry at the moment, but if there’s one thing we’re learning, it’s that there’s no one correct path to getting a project produced, selected, distributed, etc. You honestly never know what could happen; as such, all filmmakers need to focus on is just telling the best possible version of the story.
Andrew Huang: People don’t often think about how much of making work is all about people skills. Problem solving together, conflict mediation, listening, listening, listening. Directing is all about inspiring others to do their best or unlocking defenses or blocks to reap new potential that they haven’t thought of before. Give them that gift and they’ll return it to you tenfold.

What does it mean to you to be recognized by the Tribeca Film Festival?
Joe Pena: It’s an incredible honor to bring “Release” to Tribeca this year. Without the festival, we would have never met the producers at Topic and this project would never have been made. In fact, we’ve recently announced that we will be developing more projects together.
Matt Dellapina: Well, as a kid from the Bronx, I used take the train into Manhattan on the weekends just to catch the stuff playing at the independent theaters. We didn’t have them uptown. So to be offered a spot at Tribeca, a festival whose essence comes from the rebirth of New York City and its stories, both major themes in “Adult Ed.”, is a real full circle journey for me, personally. And for my director, Sean, and me, it’s a culmination of the work we began a decade ago.
Sarah Salovaara: It’s huge for me. As a New Yorker, I’ve been going for as long as I can remember. I’ve covered it as a journalist and I’ve even worked as a theater manager, so I feel like it’s really come full circle.
Nabeel Muscatwalla and Adam Turkel: The fact that “Better Days” is a student project made on a shoestring budget definitely makes its acceptance into Tribeca all the more special to us. We are honored, inspired, and still quite bewildered to be in the company of the incredible filmmakers featured in this year’s lineup, and look forward to learning from their work.