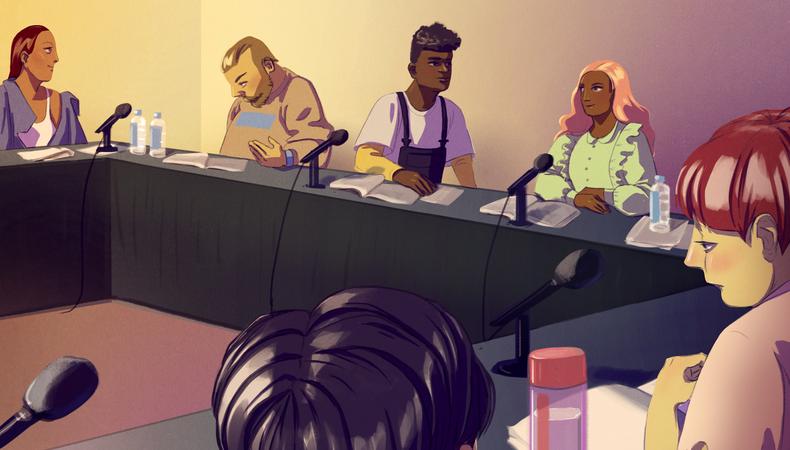 Summer hiatus is over and episodic television is up and running again. Have you ever wondered how a TV series gets cast? Well, I’m here to give you the 411.

The casting department is usually one of a small handful of groups who are hired right after a project is greenlit and goes into preproduction. A huge difference between casting for film and TV is the pacing. Casting a TV pilot and series is like jumping on a moving train and praying it doesn’t run you over. At its very best, between scheduling, writing, scouting, and more, casting for TV is a constantly moving puzzle that runs like a well-oiled machine.

On TV projects, there are many cooks in the kitchen. We have the studio that is producing the project and the network that will air it. Each has a group of executives that weighs in and add to the number of hoops an actor has to jump through to get the coveted role. That means when my deal on a new TV project has just been closed and my butt has barely hit my office chair, it won’t be long before I receive a call from my casting executive at the studio asking me for lists. Lists are the casting director’s preliminary suggestions for the series regulars, along with the availability of the actors.

Early in the process, casting meets with the creatives—usually the showrunner and executive producer who has, in most cases, created the show, along with various other producers. This is a creative meeting to go over the script and assess our needs. Some of my frequent questions are: Do we need a “name” actor for this role? Do we need to do a worldwide search? Should we hold open calls? I also emphasize the need to cast inclusively and with diversity in mind to make sure we are including everyone in our continued search.

After meeting with the showrunner and other creatives to assess the series’ needs, we release our breakdown of characters needed and brace ourselves for impact. My office becomes inundated with calls and emails from agents and managers pitching their clients. As we gather actors who pique our interest, casting becomes the first stop on the auditions trail. During pilot season, the casting time frame is accelerated because of the amount of talent to be seen, but also because every casting director is trying to get “Joe Star-of-the-Week” into their offices first. We’re all competing against one another for the same talent pool. During this time, we move swiftly to gather our ideas and set up auditions for “producer sessions” where the producer(s) and director sit in on the auditions or watch them on our site, where we’ve uploaded the audition clips.

Now, here’s where it gets tricky: If we see someone we kind of like, we immediately have to get a test deal going on them. By closing a test deal for the actor, we have the right to “hold” them for five to seven business days after the network test until we decide whether we will cast them. This keeps them from testing on other projects; we effectively take them off the market for conflicting projects. The reason it’s tricky is that we are usually testing actors way before we have seen all of our choices, so it’s very hard to make decisions. With this process, it’s a miracle that you ever get a cast like those on “Friends” or “Will & Grace” that are so dependent on the chemistry between the cast members.

If the actor makes it through the first testing process at the studio, we’ll then take them to the network to test. This is adding yet another group of executives into the decision-making stew.

Testing has changed so much over the years. On some shows, we test the actor live in the room in front of a small audience of executives and creatives for the show. It’s usually a small screening room or a large conference room that is often very cold and uninviting. The casting director usually reads with the actor, unless it’s a chemistry test audition, where we’re looking to see how the testing actor lines up with an actor we’ve already cast. The tension is thick in the air, and it’s usually a very nerve-racking experience for the auditioning actor.

READ: 7 CDs Share What You Should Know About Auditioning for TV

Actors are left in a waiting room with two other actors faced with the prospect of signing a contract to cover the next seven years of your life. We call you in one by one and you audition, then go out into the waiting room with your remaining competition. Sometimes, I stick my head out of the room to say, “You guys can leave, but we’d like Tim to come back in and do it again.” This is where things get even trickier. Just because I’ve told you to leave and asked Tim to come back in doesn’t mean you didn’t get the part. You may have done very well, and we don’t need to see you read again, but we want Tim to do it with a different pace to the scene. Your goal is not to overthink this disparity in treatment.

Lately, more shows are doing a “work session,” wherein we work on the scene together (casting director, director, producer, and actor) and videotape it. This work session becomes your “test,” and we show that to the studio and network executives instead of hosting a live audition. I prefer this way because we’re finally comparing apples to apples. We’re casting for television; it makes sense to be seeing someone on tape rather than seeing them live and imagining what they’ll look like on a screen. We can also do the scene multiple times until we get it right and then present that at the test.

Another difference in casting a TV series rather than film is that for the series regulars, we have to think of long-term relationships and how they might play out over the years. We’re looking to hire actors who can grow through the coming seasons. We need smart, articulate, hardworking talent who can withstand the grind of a TV filming schedule week in, week out. I said before that casting for TV is like managing a moving train and you don’t want to get run over—but that’s essential to the process. It must run like a train schedule or it’ll fall off the rails; we need multitaskers across all departments because we are simultaneously in pre-production, production, and post-production every day.

Once casting and creative have made a decision on an actor, we have the pleasure of informing them that they’ve got the role! Calling their agent or manager and then getting the actor on the phone, as well, to tell them they’re joining our project is the best part of my job.

Then—oh, you thought we were done?—there’s one last hoop to jump through in casting the pilot: The table read. The table read is where we get all the actors we’ve cast together to read through the script while all the creatives and studio and network executives watch. We use this time to see how our full cast looks and feels together. Unfortunately, some actors don’t make it past the table read and can get replaced on the spot.

APPLY: Ready to get to work? Check out Backstage’s TV audition listings!

It’s an exhilarating process when we finally get the whole cast in place and start shooting. Then, we wait to see if it gets picked up!

During network pilot season, there can be as many as 100 pilots produced. After that, the advertisers and networks decide which shows will go to series. Casting is always anxiously awaiting the upfronts (where the advertisers and showrunners announce their yearly pick-ups) to see if their shows will go to series and they’ll have a coveted weekly job. It’s at this point that we see if our entire cast will be going forward. A show can get picked up to series, but the network can ask for recasting. In this situation, the casting director comes back to work before the series casting begins and brings in actors to replace the actor who’s being recast. Sometimes we have an obvious second choice and sometimes we start auditions all over again.

Once we’re officially back to work on the series, we meet with the creative team to talk about the show “bible,” which outlines the storylines for the show and each character. We talk about new recurring characters being introduced and the needs for each, along with the upcoming shooting schedule. The schedule is key, because it lets us know when we have to have actors in place for those roles. TV is more of a producers’ game than film, and the director is usually the guest for each episode.

READ: What Happens After You Leave the Audition Room

Each week, we meet with the team to talk about the upcoming episode and brainstorm about casting. Casting will pre-read roughly 30-50 actors for each role (depending on the size) and usually bring the producers and director up to seven options. We then all discuss our top picks and come to a decision on who we’d like to cast. Casting receives the pages as they are written—sometimes up to the last minute.

Then, we run these choices up the flagpole at the studio first with the casting executive, then at the network. We even have to get network and studio approval on actors who only have one line. At first, I thought the level of studio and network oversight was a bit much, but I soon realized that these executives are casting about 30 shows each season and they have hired several thousand actors each year. They have a bird’s-eye view of actors who are doing great work and actors who gave them trouble on set or didn’t quite perform as expected. They also can see if a particular actor is getting a little oversaturated within their network. I have come to depend on their advice and guidance.

Then we go back to our line producer and get their sign-off on the schedule and the days each actor will work. We negotiate the deal with the actor’s agent and get their paperwork underway. Once the deal is closed, we pass off the actor’s info to the wardrobe department, and they take it from there.

Once we’re cast, we go to the weekly table read for each episode. Again, it is here that an actor can be replaced, we have to recast, and the whole thing goes around and around again.

Marci Liroff
Known for her work in film and television, producer, casting director, and intimacy coordinator Marci Liroff has worked with some of the most successful directors in the world. Liroff is also an acting coach, and her three-night Audition Bootcamp has empowered actors to view the audition process in a new light.
END_OF_DOCUMENT_TOKEN_TO_BE_REPLACED