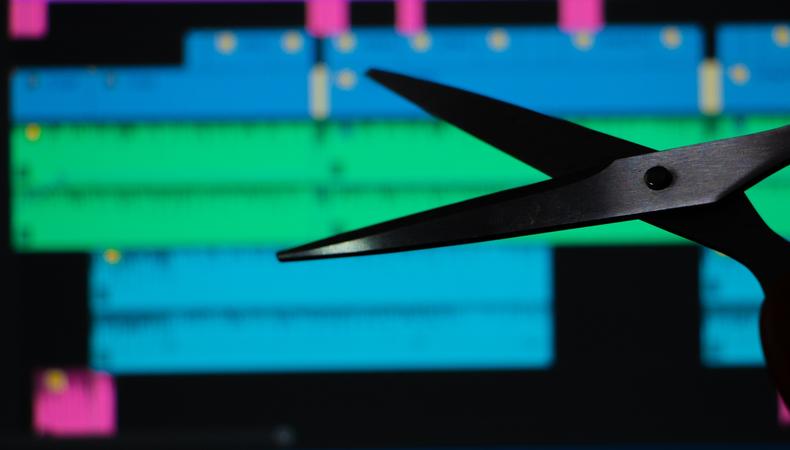 Any aspiring film editor needs to learn a variety of cutting techniques to separate one clip from the next in a way that best shares the narrative. The J-cut in film is commonly used to create intrigue, develop drama, and captivate the audience.

A J-cut, J-hook, audio lead, or audio advance is a transition technique that brings audio in from the next clip while still showing the previous clip’s visuals. This means that the audience hears the subsequent scene or shot before they see it.

Why is it called a J-cut? The name comes from the “J” shape the technique makes when placed into video editing software.

Why do editors use J-cuts?

J-cuts are primarily used for the following reasons:

Opening scene: This cut style is often used in a film’s opening scene to intrigue viewers.

The movie “Whiplash,” for instance, introduces jazz musician Andrew with the aggressive sounds of his drumming. After a few beats of this audio, viewers encounter the accompanying visual: a dark room in which a sweat-covered man furiously plays the drums.

As writer-director Damien Chazelle explains, using a J-cut for this opening scene establishes the (literal) tone of the film. “I knew I wanted to begin the movie with my main character drumming,” he told Business Insider. “I wanted it to be almost reductive: stick all the movie’s main ingredients into the first few minutes. Drummer, music school, mean teacher. No beating around the bush. Cram the entire movie in miniature into the opening scene.”

Foreshadowing: A J-cut creates a sense of foreshadowing in a video since it provides the audience with an auditory glimpse at what the next clip might bring. This is especially useful in both horror and comedy, two genres based on set-ups and punch lines—it all depends on if you cut to something surprisingly funny or scary.

Storytelling: The J-cut helps propel the story forward, making it an effective narrative device. The use of sound design in the cut indicates that one scene is transitioning to the next and maintains forward momentum. A J-cut can seamlessly blend scenes together, keep viewers engaged and tension high, or even be used for comedic effect—such as this pre-lap joke from “Scary Movie 3” that also perfectly illustrates what a J-cut is.

Dialogue: When two characters are speaking to one another, it can feel disruptive to have cuts as soon as one starts talking. Using a J-cut creates a more natural feel in dialogue scenes while also showing the listening character’s reaction.

For example, watch this scene from “Juno” and pay attention to how often we hear dialogue before cutting to the speaker. This ensures that even during rapid-fire dialogue, everything feels natural.

It also allows the audience to see how other characters react to the speaking character, which then emphasizes the importance of those reactions.

J-cut vs. L-cut: What’s the difference?

Both J-cuts and L-cuts are split edits (or scene transitions) in which audio and visual elements shift at different times. The continuity of these shots intrigues viewers while allowing the story to keep flowing. In a J-cut, the audience hears audio from the next scene or shot before the cut; in an L-cut, we visually cut from one shot or scene to another while still hearing the audio from the first shot or scene.

These two videos illustrate the difference between the two similar cuts:

According to editor Cody Liesinger, “Both of these styles of edits are designed around flow. If your editing is very visible, the story can feel very staccato. L-cuts and J-cuts can manipulate the flow of your edit in a way that can complement the story.”

How to create a J-cut

To create a J-cut, cut to the audio of the next scene or shot before you cut to the visual. To do this on non-linear video editing platforms such as Adobe Premiere Pro, Audacity, or iMovie:

How to use J-cuts effectively

You can use J-cuts alongside L-cuts to make the film more intriguing and exciting, or try it with one of the other commonly-used cuts: